Gov. Doug Ducey delivers his State of the State address on Monday in House chambers at the State Capitol. (Photo by Juan Magaña/Special for Arizona PBS) 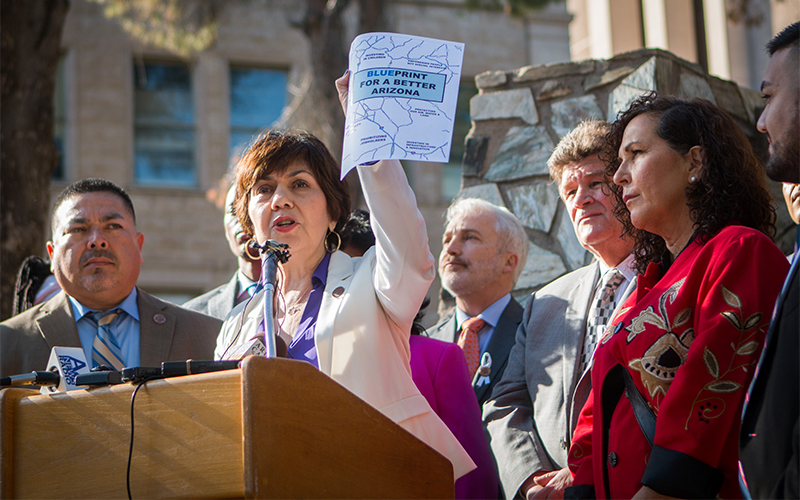 PHOENIX – Education funding and the looming threat of water shortages were among the key issues Gov. Doug Ducey emphasized in his State of the State address Monday afternoon.

The Arizona Republican opened his speech in House chambers at the State Capitol saying, “The challenge before us is to lay the groundwork today to make sure the Arizona of tomorrow remains strong. Doing so requires action now to do the things that matter and secure Arizona’s future.”

But with Democrats gaining seats in the November election, party leaders vowed things will be different in the current legislative session.

Ducey said he was “ready to get back to work” and that both Republicans and Democrats “think there is common ground to work together.” He highlighted several major issues facing the state.

The governor stressed that it was “time to pass the drought contingency plan, and we have 17 days to do it.”

Arizona and much of the West have been in a drought since 1994, according to the state’s Department of Water Resources. The federal government has given Arizona until Jan. 31 to hammer out a plan to deal with expected water shortages across the vast Colorado River Basin.

“Because of teachers … we got that pay raise passed and into teachers’ paychecks,” he said.

He also warned against diverting the money elsewhere, warning, “anyone thinking of using these resources anywhere else, I have one message: Don’t even think about it.”

He also proclaimed that the “next generation of Arizona teachers” would be produced through his administration’s new Arizona Teachers Academy. The program, which launched in 2017 with 221 enrollees, offers a scholarship to Arizona college graduates willing to stay in-state for a teaching career, according to the academy’s website. Ducey promised “more dollars, more support” for the academy this year.

The governor called for a renewed focus on Career and Technical Education (CTE), claiming 99 percent of CTE students graduate from high school.

“These programs we plan to build, expand and align with the jobs of tomorrow,” Ducey said.

According to the Association for Career and Technical Education “the average high school graduation rate for students concentrating in CTE programs is 93 percent.”

Ducey proudly reminded legislators that when he took office four years ago, the state had a $1 billion deficit, but this year it will have a $1 billion surplus.

“Breaking news,” Ducey announced. “We now own this building again.”

As for taxes, “Arizona has weathered the storm,” he said, adding that his administration has no intention of raising taxes.

“We’ve gotten government out of the way of job creation. We’ve eliminated more than 1,000 regulations in this state,” Ducey boasted. He also praised the new United States, Mexico and Canada trade agreement, the NAFTA replacement that awaits congressional approval, saying it will bring more jobs and trade to the state.

The governor again criticized the state’s many licensing boards and their regulations, saying they prevent workers licensed in other states from moving to Arizona.

“If people want to work, let’s let them work,” he said.

The governor also stated he wished to protect Second Amendment rights “while keeping guns out of the hands of individuals who are a lethal threat.”

Ducey did not mention border security in his speech, hardly addressing any issues touching Arizona from Washington, D.C.

However he did take one opportunity to criticize Congress for the recent government shutdown, now in it’s record twenty-third day, saying “the federal government is broke, broken and broken down. Washington can learn a lot from us.”

Ducey wrapped up his speech in inspirational fashion proclaiming, “we’ve got our work cut out for us … I have high hopes this will be our most productive session yet. Let’s put Arizona first … let’s get to work.” 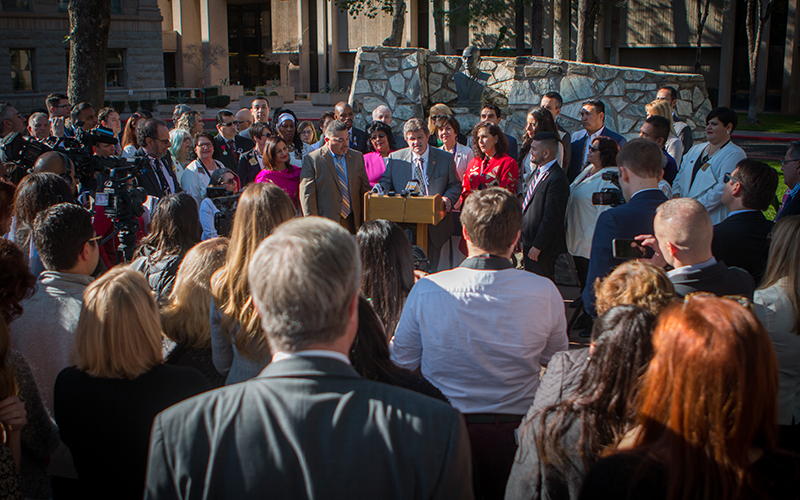 At a news conference before Ducey’s address, Senate Minority Leader David Bradley, D-Tucson, House Minority Leader Charlene Fernandez, D-Yuma, and several caucus members gave their party’s form of a rebuttal just hours before the speech, laying out their legislative priorities for the year in what they called a Blueprint for a Better Arizona.

“It is not going to be business as usual,” Fernandez said. After last year’s midterm elections Democrats now hold 13 of 30 seats in the Senate and 29 of 60 seats in the House, still short of the majority but paring the Republican lead in both chambers.

Rep. Raquel Terán, D-Phoenix, said the message they’ll send Ducey, a Republican who won a second-term in November, would be one promoting the protection of democracy, stating that “citizens demanded something different” in the election.

“We hope to work together with the governor,” said Rep. Athena Salman, D-Tempe.

Rep. Kelli Butler, D-Scottsdale, said she ran on increasing education funding and hopes the governor is willing to work across the aisle to do so.