Biggs, Gosar among handful to oppose back pay for furloughed feds 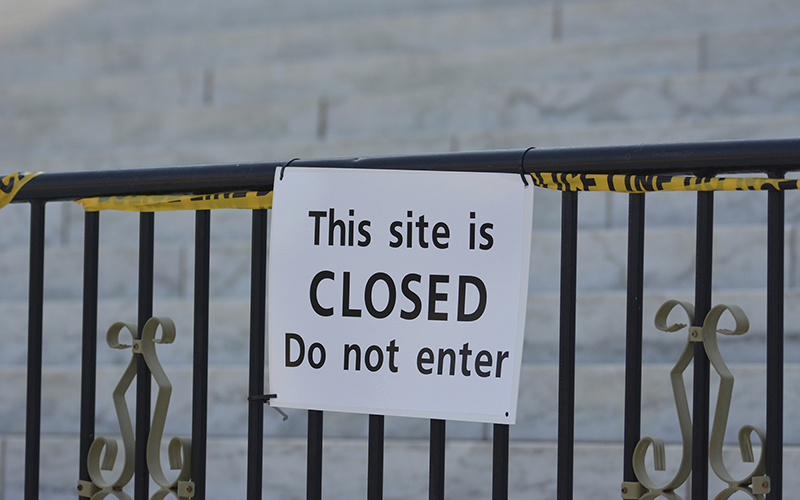 Arizona Reps. Paul Gosar and Andy Biggs were two of just seven House members who opposed a bill to give back pay to federal workers after this government shutdown – as well as future shutdowns, which drew their ire. (Photo by John Sonderman/Creative Commons)

WASHINGTON – President Donald Trump repeated a promise Monday that furloughed federal workers will get back pay when the government shutdown ends, but a bill to do just that was opposed by two Republican lawmakers from Arizona.

Reps. Andy Biggs of Gilbert and Paul Gosar of Prescott were among just a handful of votes against the Government Employee Fair Treatment Act of 2019, which is heading to the president’s desk after passing the House on a 411-7 vote Friday.

The bill says the roughly 800,000 federal workers affected by the current government shutdown, now in a record-setting fourth week, would get back pay as soon as possible after the shutdown ends. It would also apply the same policy in any future shutdowns.

It was that last provision that caused Biggs and Gosar – who represent 13,287 federal workers between them, according to 2015 data from the National Treasury Employees Union – to vote against the bill.

A spokesman said Biggs empathizes with workers who are going without pay, and noted that the congressman has had his own salary withheld during the shutdown. But he told the Arizona Republic that Biggs opposed the bill “because it permanently extends back pay to government workers for all potential shutdowns, anticipating and incentivizing future shutdowns.”

Gosar echoed that sentiment, telling The Hill newspaper that the bill “takes away a useful tool in holding government accountable.”

“Shutdowns have historically served to push both parties to compromise and resolution,” Gosar’s statement said. “This bill eliminates the impact and urgency a shutdown creates and rewards bureaucrats and swamp dwellers.”

Neither Biggs nor Gosar responded to requests for comment Monday.

Trump told reporters Monday that federal workers will be paid.

“Many of the people – and they’re all going to get their money – many of the people that aren’t being paid right now are in total agreement with us” about the need to demand funding for a border wall in any budget deal with Congress, Trump said.

His comments come as a new survey of Arizona residents shows that 45.9 percent do not support shutting down the government to win funding for a wall. The poll by OH Predictive Insights and KTAR said that 30.7 percent support a shutdown for the wall, while the rest had no opinion. The Jan. 8-10 online survey of 1,246 people has a margin of error of plus or minus 2.78 percent.

“Arizona has been a hotbed for illegal immigration issues for many years and to find Arizonans do not support a government shutdown for funding a wall is surprising to say the least,” said OH Predictive Insights Managing Partner Mike Noble in a statement on the poll.

The shutdown began Dec. 22 when President Trump rejected a bill to extend funding for a number of federal agencies because it did not include more than $5 billion for construction of a border wall. Congress was only willing to allocate about $1.6 billion, and the two sides have failed to reach an agreement since.

That has left 800,000 federal workers without pay, about 7,300 of them in Arizona, according to estimates from the Center for American Progress.

While about 380,000 of those workers have been sent home, another 420,000 that are deemed “essential” employees – including Border Patrol and Transportation Security Administration agents – have been forced to work without pay for the last three weeks.

The shutdown has left affected workers “scrambling to make arrangements for unpaid bills, including tapping their retirement accounts,” said Ken Thomas, president of the National Active and Retired Federal Employees Association, in a statement Friday.

Thomas welcomed the passage of the back-pay bill, which he said will be “some comfort” to those workers who missed a paycheck last week. But he said the shutdown needs to end so those workers can do their jobs.

“For the good of our country, lawmakers must put aside political differences and find a mutually agreeable path forward that will allow federal employees to do what they do best: serve the American people,” Thomas’ statement said.

Rep. Debbie Lesko, R-Peoria, who voted to approve back pay for the affected workers, said simply that, “Federal employees should be paid.”

“After all, it’s not their fault the government shut down,” she said in a statement Monday. “This bill will guarantee that any federal worker impacted by a shutdown will receive back pay once the government is back up and running, giving stability to our federal workforce.”

The other government shutdown

A Washington snowstorm that closed most federal offices Monday turned into to day of sledding on Capitol Hill for many who were off work or out of school.