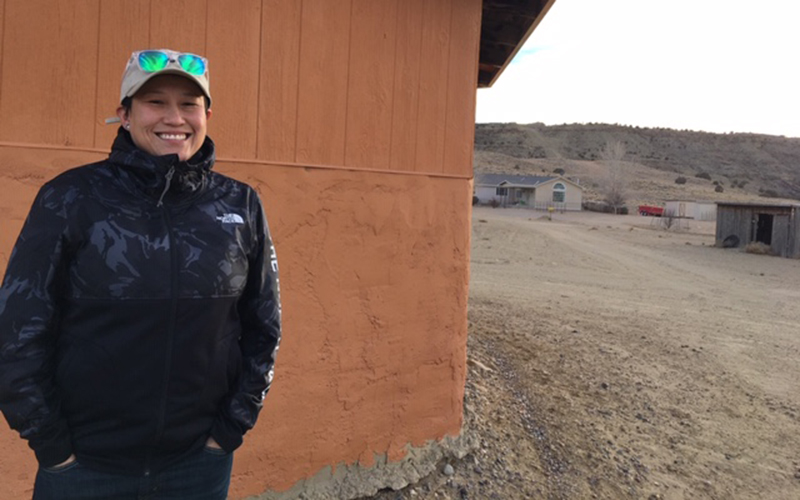 After earning a college degree, Michelle Sherman wants to return to the reservation to help other Navajo youngsters struggling with identity issues. (Photo by Laurel Morales/KJZZ)

UPPER FRUITLAND, N.M. – Michelle Sherman was 5 when she realized she was different.

“I remember seeing two guys holding hands, and then my mom’s like, ‘Oh, that’s disgusting,’ and I was like, OK, maybe it is disgusting,'” Sherman said.

Sherman started to believe she, too, was “disgusting,” and at only 11 years of age, she attempted suicide. Twenty-two years later, her arm still bears the scars.

“I really thought something was wrong with me,” Sherman said. “But then the thing that stopped me was my grandmother.” 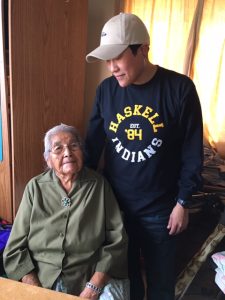 Alice Palmer, 93, accepts her granddaughter Michelle for who she is. (Photo by Laurel Morales/KJZZ)

Sherman’s grandmother, Alice Palmer, 93, grew up in Upper Fruitland, New Mexico, on the northern edge of the Navajo Nation, and raised her family there. She and Michelle have always been close: watching wrestling, grinding corn and going to the flea market together.

Through her teens, Sherman tried to fit in, but she was living a double life. At 19, her sister walked in on Sherman and a girl she was dating.

“She just barged in the (bedroom) door and yelled at me, ‘What the hell are you doing?'” Sherman recalled. “‘You shouldn’t be doing this. … What’s wrong with you? This is gross. This is disgusting,’ and made me feel less human. ‘What do you think grandma’s going to think of you?'”

That’s when Sherman knew she had to leave home. The last thing she wanted to do was disappoint her grandmother.

A quarter of Navajo LGBTQ youth have been kicked out of the house because they are gay, according to a Diné Policy Institute study, and they are three times more likely to attempt suicide than their white counterparts. Many Navajo LGBTQ youth leave the reservation for Albuquerque, Phoenix and Los Angeles, places where they’re more accepted and can marry someone of the same sex.

As it turns out, Grandmother Alice had known all along and loved Sherman for who she is.

Across the Navajo Nation, elders have come to the aid of granddaughters and grandsons when the rest of the family rejects them. Medicine men revere the “two-spirited,” as they’re sometimes called. 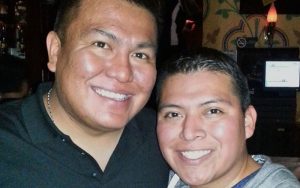 Alray Neson (left) and Brennen Yonnie would like to get married but can’t do so on the Navajo Reservation because same-sex marriage is outlawed there. (Photo courtesy of Alray Nelson)

“When I came out to my family, my mother took it the hardest, but my grandparents didn’t,” said Alray Nelson, an LGBTQ rights activist. “My grandmother sent me a handwritten letter when I was in college. My grandfather doesn’t speak English. He speaks Navajo fluently. He told my grandmother to tell me I would always have a home with them, that I’m his son.”

Historians say federally run boarding schools and other tactics to assimilate Native people into white culture have taught generations of Navajo, including Nelson and Sherman’s parents, to discriminate. Navajo leadership are an example. In 2005, the Tribal Council passed the Diné Marriage Act rejecting same-sex marriage.

Nelson heads Diné Equality, which is working to repeal the law.

“We are seeing clearly the aftereffects of what colonialism can look like and how it really shifted our values as Navajo people,” Nelson said. “Whereas at the time, if you were LGBTQ and growing up in a Navajo traditional family, families celebrated that fact. They said that we were sacred. They said that we had sacred roles.”

Those roles included mediators and leaders. Traditionalists believe the two-spirited are powerful and there are multiple genders. Navajo historian Jennifer Denetdale said the Diné creation story includes a nádleehí.

“Today, we take the nádleehí as a being who was what we would call an intersex person today, meaning that this is a person who has sexual organs of the male and the female and is considered to be a third gender in Navajo society,” Denetdale said.

When First Man and First Woman weren’t getting along, tradition says, it was the nádleehí who intervened. 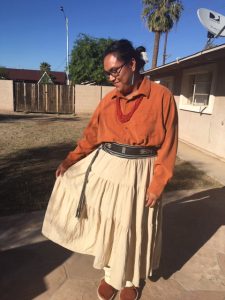 Bry Smiley calls herself “nádleehí,” which is considered a third gender in Navajo tradition. (Photo by Laurel Morales/KJZZ)

Bry Smiley, who calls herself “nádleehí,” said her grandmother stood by her side.

“My late grandma, Ramona, she used to call me her boyfriend,” Smiley said. “We were born on the same day May 9.”

It wasn’t until Smiley took an indigenous studies class in college that she learned what that meant.

“Navajo family used to pride themselves to have two-spirited people in their family,” Smiley said. “Some of them would take someone by the arm and say, ‘This is my boyfriend. This is my boyfriend.’ That would show people ‘This person makes me rich.'”

After Michelle Sherman earns her bachelor’s degree from Haskell Indian Nations University in Kansas, she plans to return to the Navajo Nation, where LGBTQ youth often don’t have access to resources, let alone the internet.

“If I want to keep inspiring, then why not do it at home?” Sherman said. “Just like my grandma, she’s here. She still inspires people.”

She looks down at her forearm, where she has tattooed a diamond design her grandmother made famous when she wove rugs. On the other side of her arm are the scars reminding her every day that she’s still here and has a purpose – to help Navajo youth.