Beetles vs. birds: What happens when fighting nature with nature backfires?

COTTONWOOD – Fighting nature with nature seems like a good idea – unless nature doesn’t care about geography. 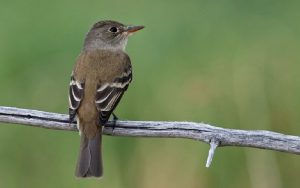 The U.S. Fish and Wildlife Service listed the southwestern willow flycatcher as endangered in 1995. There are an estimated 600 to 800 breeding pairs of the songbird scattered across the West. (Photo courtesy of Natural Resources Conservation Service Colorado, USDA)

Today, the effects of a federal decision made 20 years ago to use Asian beetles to slow the spread of an invasive shrub across the West are reducing nesting habitat for an endangered songbird – the southwestern willow flycatcher.

The U.S. Department of Agriculture’s Animal and Plant Health Inspection Service, introduced tamarisk leaf beetles from China and Kazakhstan around the West to kill tamarisk trees, also known as salt cedars. Some of the beetles were released near Moab in eastern Utah.

“The goal of their program was to control tamarisk,” said Greg Beatty, a biologist with the U.S. Fish and Wildlife Service who has led flycatcher recovery efforts since 1999. “Reduce it. Kill some plants. I don’t think they anticipated that it would kill all tamarisk, but that it would reduce its abundance.”

The beetles did their job, stripping the tamarisk of its feathery, green canopy, which often kills this fast-growing deciduous shrub. The tamarisk was introduced in the 1800s from Eurasia as an ornamental, for use in windbreaks and as a way to control stream-bank erosion.

The APHIS program wasn’t supposed to release beetles within 200 miles of where southwestern willow flycatchers nest. The birds can be found throughout the West; in Arizona, around Roosevelt Lake and along the upper Gila River. Experts calculated even if the beetles migrated south toward Arizona, the bugs would not survive the difference in climate. 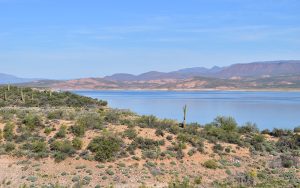 Tamarisk trees, which aren’t native to the Western Hemisphere, can be found around water in Arizona, including Roosevelt Lake east of Phoenix, where flycatchers have been found. (Photo by Rachel Charlton/Cronkite News)

“In retrospect,” Beatty said, “seems pretty clear there wasn’t really any type of geographical boundary that would have kept them where they were at.”

From the Virgin River in southwestern Utah and into the Grand Canyon and its tributaries, the beetles spread into Arizona, Beatty said.

“It’s happened faster than anybody would have expected because we didn’t expect them to be here,” he said.

Tamarisk is reviled across the West. It is notorious for crowding out native vegetation, effectively choking riparian areas, particularly along dammed waterways. Some scientists say it hogs water, leaving less for native species, although that’s in dispute. It’s considered a noxious weed in New Mexico, Montana, South Dakota, Wyoming and Texas.

The USDA terminated the biological control program in 2010. But now there’s concern over what will happen to flycatcher habitat in Arizona.

The primary nesting habitat for the flycatcher, which was listed as endangered in 1995, is in willow trees surrounding riparian areas. However, researchers have found that flycatchers also use tamarisk. 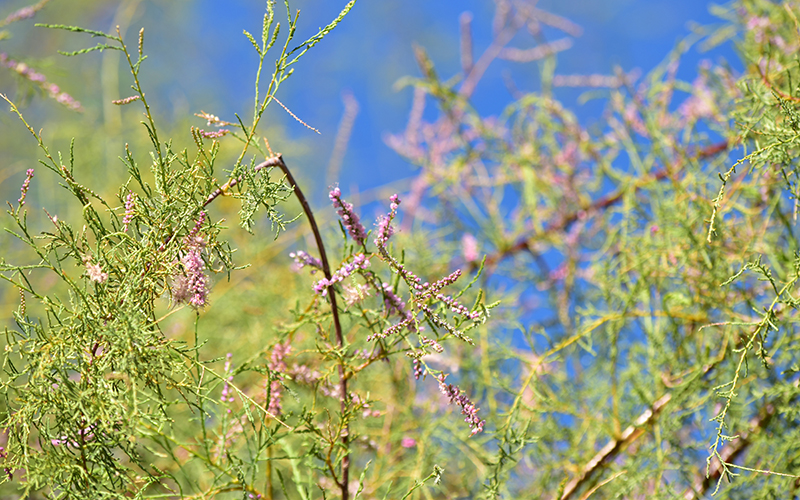 Robin Silver, co-founder of the Center for Biological Diversity in Tucson, said flycatchers depend on foliage to protect their nestlings from the scorching Arizona sun.

“Even if there are willows, they’re still dependent on the salt cedar or the tamarisk,” Silver said. “So to denude or kill that tamarisk right now is really putting too much on the flycatcher for them to be able to survive long term.”

The songbirds – which are brownish-gray with white wing stripes and measure about 6 inches from beak to tail – are also faithful to their nesting sites, returning year after year.

The birds still are listed as endangered. In an email, Beatty said the flycatcher population is measured by territories, which include southern California, Arizona, and New Mexico. There are 1,200 to 1,600 territories, and the U.S. Fish and Wildlife Service estimates there will be a breeding pair per territory. That puts the number of breeding pairs at 600 to 800.

The Center for Biological Diversity successfully sued APHIS in 2013. The court’s ruling found that APHIS did not comply with the Endangered Species Act in the conservation of an endangered species.

APHIS declined to comment for this story, but the agency did provide documents that state the “greater than anticipated natural and intentional human-assisted movement of the beetle caused it to spread into flycatcher habitat.”

As for the future of the flycatcher, Beatty is concerned that habitat loss will have significant impacts.

“I think we’re going to have greater booms and busts … the status of the population will decline as the beetle expands throughout its range.”