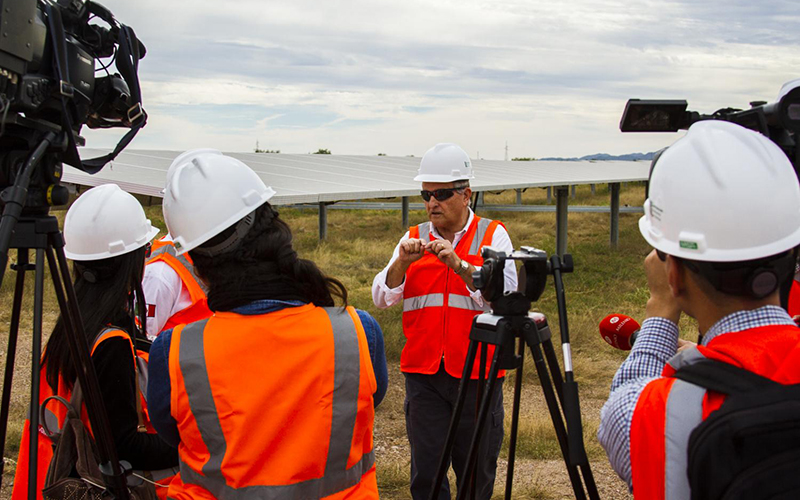 HERMOSILLO, Mexico – The last stretch to the solar array is a rough dirt road that winds through the desert scrublands east of Hermosillo, Sonora’s state capital. Barbed wire and the occasional cow are the only signs of civilization.

After one gate and then another, the panels come into view. Row after row after row of solar panels, built by the Spanish firm Iberdrola. There are nearly 400,000 of them, generating enough power for more than 100,000 Mexican homes. The powerful hum emanating from the facility’s transformer is 100 megawatts of energy passing from the plant to the electrical grid.

“In the morning, all of the panels are at a 55-degree angle pointed west when the radiation starts,” plant manager Angel Pinilla Velasco said, speaking recently to a large group of reporters. “In order to get the maximum perpendicularity of radiation on the panels.”

This facility is one of several large projects in the northern Mexican state of Sonora soon to come fully online. One plant in the coastal town of Puerto Libertad is expected to have 400 megawatts of capacity, making it one of the largest in Latin America.

“One percent of Sonora’s territory receives 6 million oil barrels worth of solar energy every day,” said Rafael Cabanillas, a solar researcher and professor at the University of Sonora. “What can we do with that? That is the challenge of the coming years.”

Much of the solar development underway across the country stems from energy reforms undertaken by the previous administration of President Enrique Peña Nieto.

Among other elements, they allowed for greater private participation in energy generation, and established a system of clean-energy auctions in which producers competed for contracts with the state utility and private energy users.

Previously, solar development was limited to smaller projects or self-generation by large users, according to Lisa Viscidi, director of the energy, climate change and extractive industries program for the think tank Inter-American Dialogue.

“But you couldn’t have regular utility-scale projects with power generation from private companies,” she said. “Now there are no restrictions on that.”

Alfonso Campos, director of Iberdrola Renovables Mexico, said his company’s project probably could have proceeded without the reforms, but the energy auctions have played a big role in increasing competition and bringing down solar development costs.

“It’s the environment of the auctions that generated this market that allowed for optimization and efficiency, which led to the viability of these projects,” he said.

He says they helped make projects like Iberdrola’s more viable, even though the project itself didn’t come out of them. He suggested that construction of the Hermosillo installation overlapping with the first energy auctions was not a coincidence.

Continued solar development in Sonora and elsewhere faces some obstacles, including the poor condition of Mexico’s electrical grid. 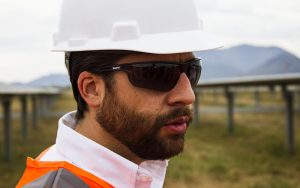 There’s also the question of what policy changes the new administration of President Andrés Manuel López Obrador could bring. López Obrado, who took office Dec. 1, was a strong critic of many parts of the energy reforms during his campaign.

His administration recently announced that the fourth annual energy auction would be suspended to allow for a “review of the objectives and scope of the process,” according to an early December release.

A top state official with López Obrado’s National Regeneration Movement party, known as Morena, did not respond to an interview request by deadline.

But Viscidi of the Inter-American Dialogue and others think that continuity with Peña Nieto’s tenure when it comes to renewables is likely. That’s despite the fact that more sweeping changes were promised to other parts of the energy sector.

“We think it’s prudent to calmly analyze the process,” he said. “The message is very congruent. It’s about a suspension of the auctions, not cancellation.”

He’s also bullish on the prospects for solar in Mexico, pointing out that the new government has made its support for renewable energy clear. Among 100 goals for his government, López Obrado committed to promoting development of alternative energies – including solar – in a speech shortly after taking his oath of office.

“It’s clear that there will continue to be new solar and wind developments in Mexico,” Campos said. “A lot remains to be done in the country, and demand keeps growing.”