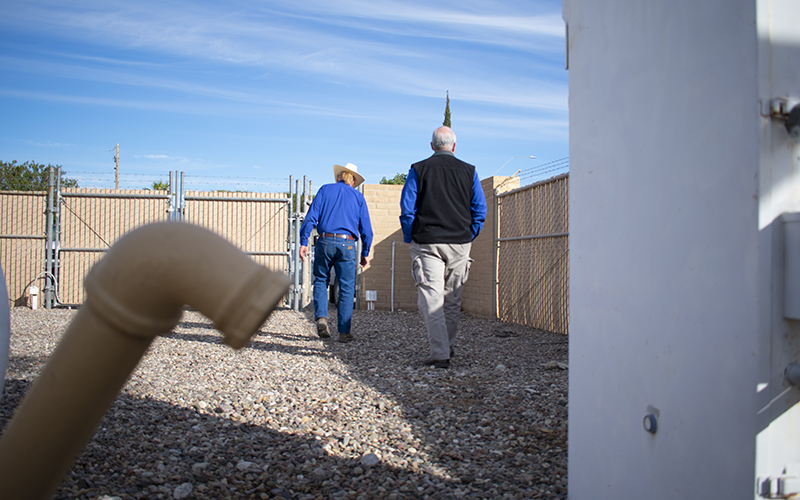 Tucson Water is mapping wells like these to better understand where PFCs are in groundwater and how they spread. (Photo by Corey Hawk/Cronkite News)

PHOENIX – Officials at a water treatment plant near a heavily polluted site in Tucson are replacing more than 56 tons of activated carbon to address newly discovered perfluorinated chemical contamination.

“The fact that we have a treatment plant there at all is entirely driven by the Superfund site,” said Tim Thomure, director of Tucson Water, referring to a 10-square-mile Tucson International Airport site that was designed as a Superfund in 1983. The Superfund program, officially known as the Comprehensive Environmental Response, Compensation and Liability Act, was authorized by Congress in 1980 to clean up uncontrolled or abandoned hazardous-waste sites, including some of the most contaminated places in the country.

The water treatment plant near the airport was set up in 1994 to address the groundwater contamination, which the Environmental Protection Agency says came from past aircraft and electronics manufacturing activities, fire-drill training activities and unlined landfills.

“The main process that we use is designed to remove TCE and 1,4 dioxane,” Thomure said.

But with the recent discovery of perfluorinated compound contamination, plant officials determined updates were needed to specifically manage those compounds and other carcinogenic contaminants.

“We’ve been managing those compounds with how we operate the facility,” Thomure said.

The plant set an internal goal of 18 parts-per-trillion for such contaminants in drinking water, well below the EPA standard of 70 parts-per-trillion. Thomure said they were able to reach the goal with current techniques.

“So this process is to essentially retrofit an existing part of our treatment plant to address an additional compound that it wasn’t designed for,” he said.

“While the water we’ve been delivering is safe … we’re essentially going the extra mile,” he said.

As with most Superfund sites, someone has to pay for the remediation upfront and then seek reimbursement through the EPA’s Superfund program and, sometimes, the legal system.

“We will be tracking our expenses and seeking reimbursement for it in the future as we identify who the responsible parties are for the presence of the perfluorinated compounds.”

The EPA identified nine groups, including the Air Force and the city of Tucson, as potentially responsible for the overall contamination. An estimated 25 groundwater contaminants have been identified at the Superfund site, and it takes time to investigate which party can be held responsible for each one.

Linda Robles, a Tucson resident who lived in the area and has pushed for legal action, said she doesn’t believe the site is safe.

“There was still contamination in our community,” Robles said. “What we thought had gotten cleaned up in the 1980s. … It never got cleaned up, and I don’t think it ever will.”