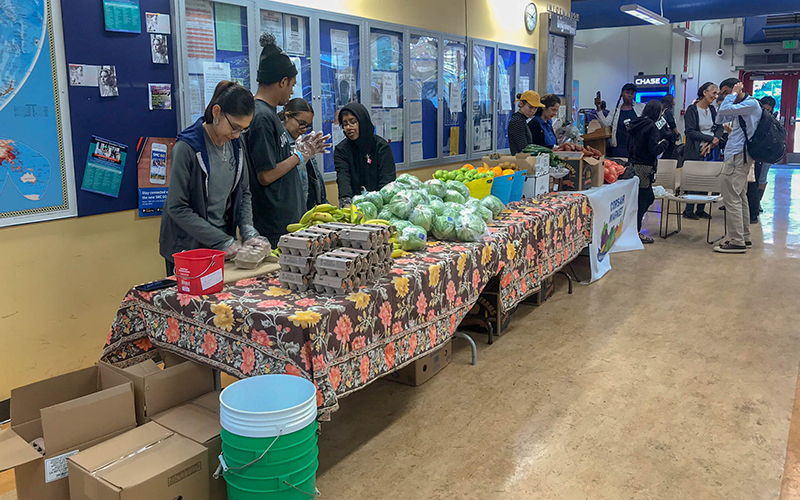 Nearly half of college students in the U.S. experience food insecurity, and some colleges, including Santa Monica College in California, give students fruits and vegetables through a weekly market. (Photo by Emily Fohr/Cronkite News)

SANTA MONICA, Calif. – In the past 30 days, nearly half of U.S. college students have gone without enough to eat, according to the National Conference of State Legislatures. That includes students in Arizona and California.

Gicela Galvez is one of those students – a sophomore studying psychology at Santa Monica College. Like many of her peers, she said it can be difficult to find fresh food at affordable prices.

This year, Galvez’s solution was to schedule her classes around the weekly Corsair Market to get free fruits and vegetables, which she said often are too expensive at the grocery store.

“A lot of communities of color, we don’t have always access to good food. We live in food deserts,” she said, meaning an urban area that lacks affordable fresh food. Food deserts, according to the U.S. Department of Agriculture, usually occur in impoverished areas. 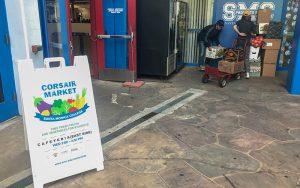 Galvez believes every school should have food security programs like the market at Santa Monica College.

One school that does is Arizona State University, which started a food voucher program for students in 2016. Students can request a voucher for a meal or two from the dean’s office. If they need long term help, the university will connect students to the Pitchfork Pantry, with locations on the Tempe and downtown campuses.

Galvez, at Santa Monica College, said the help she’s received from the Corsair Market, which takes place every Wednesday, prompted her to volunteer, so now she helps distribute the donated food.

Nancy Grass, associate dean of student life at Santa Monica College, said the school’s partnerships with the Westside Food Bank and Food Forward, a local non-profit, provide hundreds of pounds of food a week for little to no cost.

“In an hour, we give away six-, seven-hundred, up to a thousand pounds of food,” Grass said.

Since the Corsair Market began almost two years ago, SMC has provided about 180 students a week with free groceries. It’s named for Pico the Corsair, the school’s mascot.

“My goal is that every student at Santa Monica College who needs a meal gets a meal,” Grass said. “And no one has the prospect of not being able to write a paper because their stomach is louder than the thoughts in their head.”

Grass expressed gratitude for the $56,000 the chancellor’s office allocated to help advance the food security programs, adding that Corsair Market just received an additional $199,000 “to take us to the next level.”

Galvez said she is thankful for the Corsair Market.

“Sometimes it’s difficult to humble yourself,” Galvez said. “Beggars aren’t choosers. We get what we get and we don’t throw a fit.”