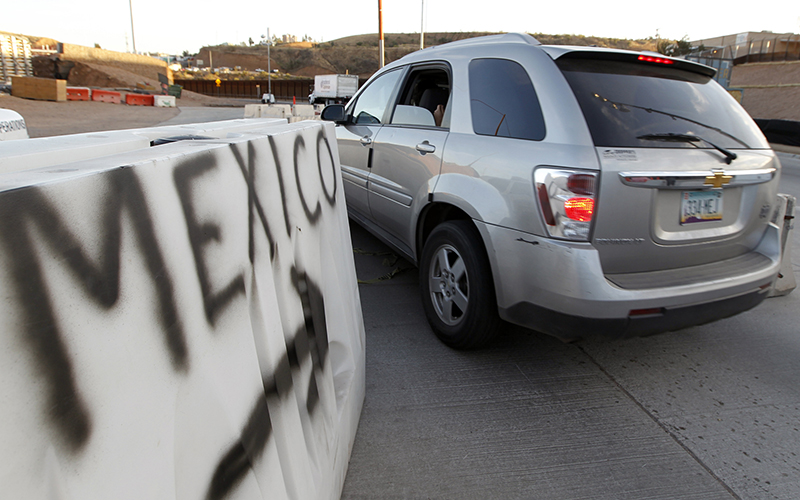 The number of U.S. residents who were born in Mexico continues a steady decline, driven by economic and political factors on both sides of the border. (Photo by Donna Burton/U.S. Customs and Border Protection)

WASHINGTON – The number of Mexican-born immigrants in the United States dropped by about 300,000 from 2016 to 2017, according to Census Bureau data, a shift that experts say is likely driven by changes on both sides of the border.

Although the drop, from 11.6 million to 11.3 million, coincides with the election of President Donald Trump, who made border enforcement and deportation of unauthorized immigrants top priorities of his administration, analysts said Trump was not the only factor. The 2016 decline was just the latest turn in a shift that began years earlier, they say.

“It’s part of a long-term decline in the Mexican immigrant population in the United States, which appears to have peaked about 10 years ago, just before or during the beginning of the Great Recession,” said Randy Capps, director of research for U.S. programs at the Migration Policy Institute.

The decline has contributed to a shortage of labor in the U.S., particularly within the agriculture industry, where Mexicans who would usually take jobs here are now in shorter supply, according to Ana Otto, government relations manager for the Arizona Farm Bureau.

“The climate here isn’t always hospitable for them, and I think the economy in Mexico is improving,” Otto said. “That combination, where there’s also economic opportunities for them back home, that helps make a decision for them, that there are opportunities there where their family already is.”

Capps echoed that, saying that a declining birth rate and improving economy in Mexico are at least partly responsible.

“The birth rate (in Mexico) is low enough, and has been low for long enough now, that the young population is not growing anymore,” Capps said. “It might even be shrinking slightly.

“The result of that is a smaller pool of people who might migrate to the U.S. – young adults, teens, 20s, early 30s, those are the prime years that people usually move.”

And a stable labor market in Mexico might be motivating more of those young people to stay home, along with improved educational opportunities that result in higher college attendance and graduation rates, Capps said.

“That’s another opportunity for younger people to stay in Mexico and then perhaps launch professional careers there,” he said.

But Capps said that increasingly tough border control policies imposed by the Trump administration and the high-profile anti-immigrant campaigns carried out by former Maricopa County Sheriff Joe Arpaio have also played a role.

“It’s not that the economy is weak in the U.S. or that job opportunities are weak, but the environment is not all that welcoming,” Capps said. “If we have an acceleration of that decline in 2017, some of that may be due to the more abrupt change in climate with the Trump administration.”

Besides agriculture, Capps said other industries that have been highly dependent on immigrant labor include construction, meat-packing and service businesses. He noted the rising demand for non-agricultural H2B visas for foreign workers, possibly indicating that there aren’t enough unauthorized workers in the United States to meet labor demands.

Otto said that the shortage of agricultural labor can be partially managed by increased automation of farming processes. But automation can only go so far.

“When you think about harvesting a crop, and certain crops that are harvested by hand, where the person picking whatever product that might be has to evaluate if it’s ready to be harvested, a machine can’t always do and replicate that particular kind of work that only a human can do,” Otto said.

In some cases, she said, farmers can rely on the H2A visa program, which provides seasonal farm labor visas to non-immigrant foreign workers in the United States, to help close the gap. But not all farm work is seasonal, and workers are needed year-round.

“They’re here for a specific crop harvest, as opposed to someone in the dairy industry, which is not seasonal in nature,” Otto said. “You need somebody there on a daily basis.”

Capps noted that the trend toward fewer Mexican natives in the U.S. could also reflect underreporting by the Mexicans here, who may not respond to Census surveys due to fear of interacting with government agencies.

“We know that immigrants generally, particularly unauthorized immigrants, don’t all answer the Census and the American Community Survey. There is some underreporting, and it’s possible that could have increased a bit in 2017,” he said.