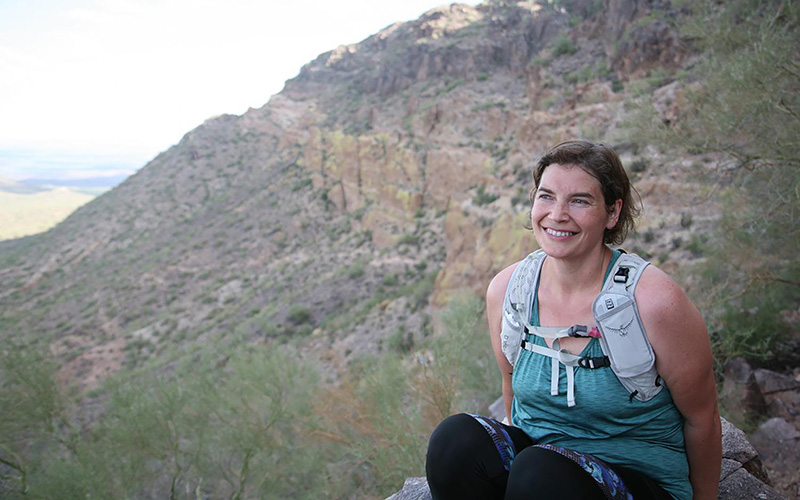 Megan Asad has wanted to hike much of her life, but she only realized she could do it solo the past few years. (Photo by Stina Sieg/KJZZ)

PHOENIX – A few years ago, when Caitlin Stewart announced she was going to hike all 2,200 miles of the Appalachian Trail, people had questions.

“Probably four to 10 people said, ‘Are you going to bring a machete?’” she recalled.

That would be a no. She wasn’t going to take a gun, either. But the real shocker was that Stewart, now 33, was not bringing her fiancé.

“And it was, like, as soon as I said no (to bringing him), the whole idea became ridiculous,” she said, “whereas before that, it sounded adventurous.”

People thought this even though as a wildland firefighter and an archaeologist, Stewart had camped and hiked a lot. Instead of buying into people’s fear, Stewart bought a plane ticket to Georgia. When she arrived at the trail, she had her teddy bear from childhood strapped to her back – and little idea of what was ahead. 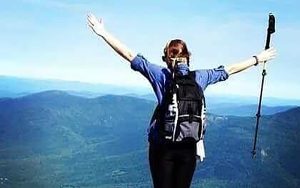 Stewart says she’s much happier now than when she left on the Appalachian trip. (Photo courtesy of Caitlin Stewart)

“And started walking,” she said. “And I walked for five months … five and a half months.”

For many women who hike alone, just getting to the trailhead means busting through a layer of resistance that doesn’t exist for men. Megan Asad feels the resistance was programmed into her.

Trekking past weathered saguaros at Usery Mountain Regional Park east of Apache Junction, she remembered what she said a few years back when a friend suggested she hike alone.

“Well, we’re not allowed!” she said, doing an impersonation of her old self. “It’s not safe.”

Asad, 45, thinks that answer was all about fear she’d been fed as a girl, then as a college student who was told never to walk across campus alone at night. But something awoke in her the moment the friend said, “Just go.”

“Basically, she gave me permission,” she said.

Asad has never looked back. She now hikes about once a week, more when she can, and very often on her own.

“I think that it’s let me get more in touch with the strength that I had all along that I didn’t know that I had,” she said.

Abigail Joseph, 50, also has found that strength in recent years.

Even though she was raised by an adventurous woman, Joseph used to think of herself as crazy for wanting to explore the backcountry alone.

“Saw the movie ‘Wild’ and decided, ‘You know, maybe I’m not so crazy.’ Maybe other people do do this,” Joseph said from a trail at Arizona Snowbowl, north of Flagstaff. She’s accompanied by Maggie, her Tibetan terrier puppy, named for Joseph’s late mother.

After watching Reese Witherspoon conquer the Pacific Crest Trail, Joseph decided to conquer one night alone in a tent in Southern California.

Instead of being afraid of the outdoors, she found herself tuning into it, especially when a few deer parked themselves nearby. 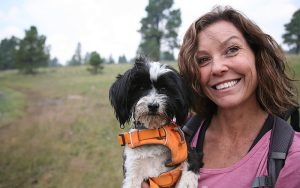 Abigail Joseph, with her Tibetan terrier Maggie, was always athletic, but she didn’t feel free to become the backpacker she is today until recently, at age 46. (Photo by Stina Sieg/KJZZ)

“And I just sat on this log and watched the deer for a couple of hours,” she said. “It was amazing.”

And something she wouldn’t have experienced if her girlfriends had been there to chat. In the four years since that first campout, she has done many solo hikes, including 19 days on California’s John Muir Trail.

Joseph said her family now trusts that she can take care of herself out in the wilds.

“But they hope that I got it out of my system as well, so it’s kind of like, ‘Now that you’ve done that, you can move on,’” she said. “But it’s kind of the opposite effect. You just want to go do it more.”

She finished the Appalachian Trail, by the way, and found trail life safer than city life.

“Most people wouldn’t just talk to a stranger and invite them home. But nobody on the trail really had qualms about doing that,” she said. “And I got a lot of free showers from very nice people.”

She also frequently hitch-hiked into nearby towns and ate food that had been sitting out for hours. She once hiked in 18 straight days of rain.

But it also “the best decision I ever made,” she said. “Absolutely.”

The experience showed her what she’s capable of, and that there’s a whole rugged world out there beyond an office.

“I would recommend anybody do it, she said. “Or anything like it.”

Whatever the Appalachian Trail is in your life.