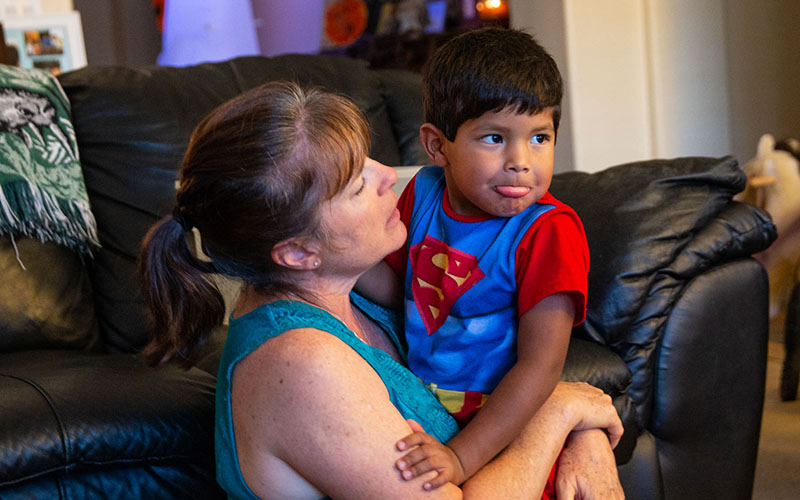 Mimi Condon attempts to calm her energetic son, Isaac. In addition to her role as a stay-at-home mom, she volunteers as a court-appointed special advocate, advocating for kids who are still living in foster care. (Photo by Lindsay Walker/Special to Cronkite News) 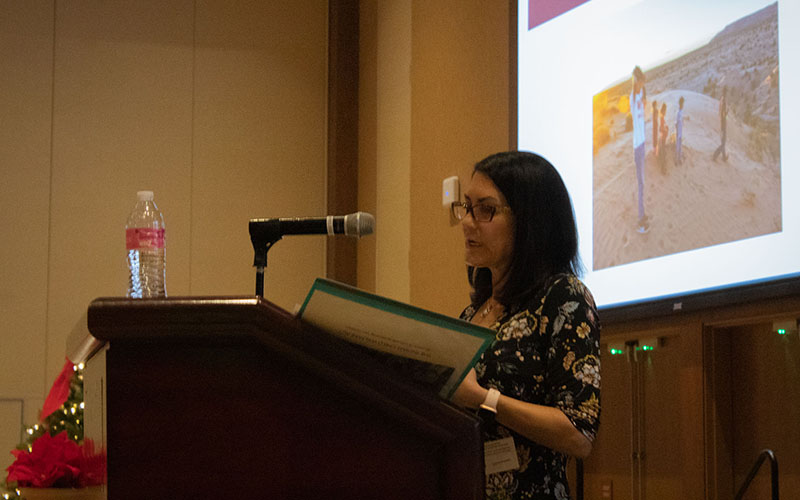 Tamera Shanker, an attorney for the Navajo Nation’s Office of Child and Family Services, said at Flagstaff workshop that growing court challenges to the Indian Child Welfare Act have left advocates “on pins and needles.” (Photo by Kailey Broussard/Special to Cronkite News) 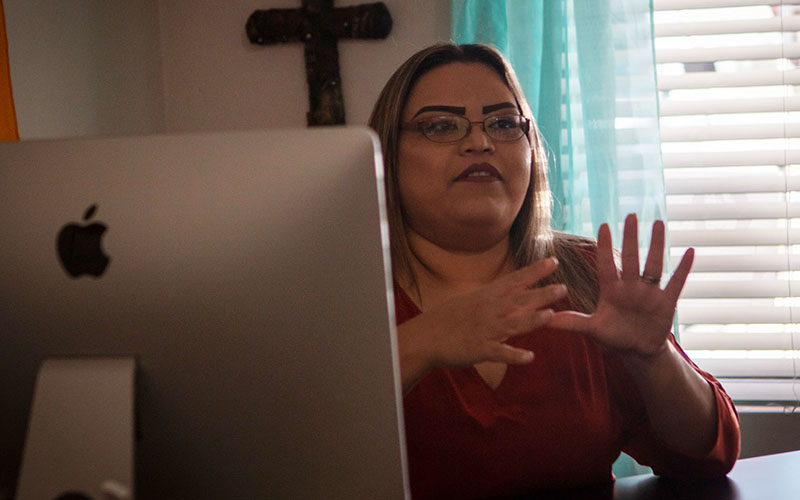 PHOENIX – Gilbert resident Mimi Condon calls the struggle to make her oldest son part of her family her “39-month labor.”

That’s how long it took to adopt David because he’s a Native American and the Condons are not – which meant the 40-year-old Indian Child Welfare Act came into play during the adoption, adding layers of complexity to the process.

The Condons did not set out to adopt Native American children, but three of their four adopted kids – David, now 11, Tommy, 7, and Isaac, 4 – are Native American. Condon tries to keep them connected to their roots, but said she adopted the boys to get them out of foster care and into a loving home.

“We didn’t want them to have that extra step,” Condon said. “We wanted them to stay with us.”

The Indian Child Welfare Act requires that Native American children be placed in Native American foster or adoptive homes, where possible, to maintain their heritage and identity.

The law is being challenged with increasing regularity in courts and by special-interest groups who contend it prioritizes race over a child’s best interest.

In October, U.S. District Judge Reed O’Connor in Texas declared key parts of the act unconstitutional, the first time any court has struck down the law.

That decision has been appealed to the 5th U.S. Circuit Court of Appeals by the federal government and by multiple tribes, including the Navajo and Cherokee nations. But Tamera Shanker, an attorney who represents the ICWA unit of the Navajo Nation Office of Child and Family Services, believes the question will ultimately end up before the Supreme Court.

“We’re all really watching this on pins and needles,” Shanker said.

‘Kill the Indian, save the man’

Advocates of the law still hear echoes of 19th century government policy of Native American boarding schools and forced assimilation, a practice summed up in the phrase “kill the Indian and save the man.”

For Native American officials, advocacy groups and families, the protections in the Indian Child Welfare Act are integral to their existence as nations.

The law was enacted in 1978, in response to the large number of Native American children being removed from tribal communities through foster care or adoption. At the time of its passage, 25 to 35 percent of all Native American children were being taken from their homes, according to the National Indian Child Welfare Association, and 85 percent of them were being placed outside their communities.

Under the law, government agencies must notify Native American tribes of children in the system who are tribal members or may be eligible for membership. The act also requires state agencies to prioritize placement within children’s families, tribes or another Native community.

If none of these options is in the child’s “best interest,” then guidelines for the law say any party in the case can argue that they have exhausted efforts to comply with the placement preferences set forth in ICWA.

Since the law’s passage, the number of Native children placed in non-Native homes has fallen to 56 percent of those removed from their families, according to the National Indian Child Welfare Association. Although it said Native children are still three times more likely to be removed by state agencies than children in the overall U.S. population. 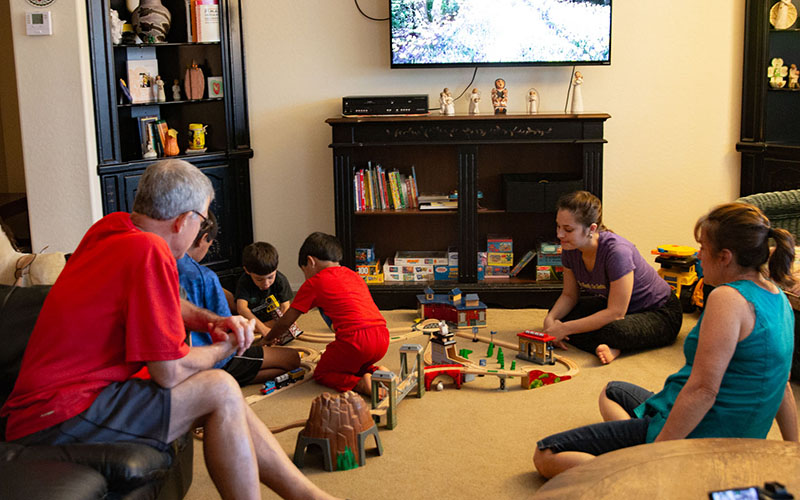 Mimi Condon, 56, and Tom Condon, 62, spend time together inside on a rainy Saturday afternoon with their kids. The couple’s older daughter lives on a naval base in Okinawa, Japan, with their grandson, and their other daughter, Blaize, 23, lives nearby. (Photo by Lindsay Walker/Special to Cronkite News)

But organizations such as the Goldwater Institute, a Phoenix-based, conservative think tank, say the law prioritizes tribal needs over those of children needing permanent homes.

Timothy Sandefur, Goldwater’s vice president for litigation, said that regardless of its original intent, the act sets up a “separate-but-equal” legal system for children who are U.S. citizens by birth but classified as Native American under the law.

“ICWA puts the power of tribal governments on the same level or above the rights of birth parents themselves,” Sandefur said. “As a result, you find cases where Indian children’s parents are trying to protect those Indian kids, and ICWA stands in their way.”

Since 2015, the Goldwater Institute has played a hand in 11 cases across the U.S. challenging the law, which Sandefur said makes no more sense than if other countries tried to claim children outside their borders.

“If the Japanese government claimed that it had authority to control foster care or adoption or child-abuse cases with regards to a child who lives in downtown Phoenix, just because his great-great-great-great grandfather was born in Tokyo, that would be absurd,” Sandefur said.

Opponents – noting that the law applies to children who are enrolled members of a tribe as well as those who simply might be eligible because of their lineage – contend that the law is unconstitutional because it depends on the child’s race.

Shanker calls those arguments “racist,” saying they echo misconceptions about the law that have existed since its creation.

“We’re still battling the same battle that we did in the ’60s and into the late ’70s,” she said. “That war is still being waged.”

But those arguments were the basis of O’Connor’s order in the Texas case, which has former foster care children and activists on all sides of the argument watching to see what happens next.

The Oneida, Cherokee, Quinalt Indian and Navajo nations, as well as the Morongo Band of Mission Indians, filed appeals shortly after O’Connor’s order. The Bureau of Indian Affairs and the departments of Health and Human Services and the Interior followed suit with appeals in late November.

At an all-day conference in Flagstaff Tuesday, Shanker told an audience of 160 Navajo Nation members and social services officials that she is “disturbed” by the possible implications of further appeals.

“No matter who wins there, this case, I predict, will end up in front of the U.S. Supreme Court,” she said. “Given the current composition of the Supreme Court, anything could happen.”

The Supreme Court has previously upheld ICWA. In 2013, it sided with a non-Native adoptive couple when a father demanded custody of his child. In its first ICWA case, the court ruled in 1989 that the law applies to children regardless of whether they were born on a reservation.

Under the law, when a child enters a state foster care system, the state agency – such as the Arizona Department of Child Safety – must notify a tribe if the child is a member or potentially eligible for tribal membership. Each tribe has its own membership standards, but if a child meets the criteria, then the tribe has the ability to intervene and determine where he or she goes.

A tale of two families

Sacaton residents Elisia and Tecumseh Manuel spent nearly 18 months adopting their youngest son, Micah. The Manuels have three adopted children from the Gila River Indian Community, all of whom were removed from their biological parents due to drug exposure at birth.

Elisia belongs to the Mescalero Apache and Yaqui tribes, while Tecumseh is a Gila River member.

Although Micah had lived with the Manuels since he was 2 days old, his adoption still involved multiple court hearings with tribal advocates and the Department of Child Safety’s ICWA unit, his mother said. She said the process was similar for Micah’s two 5-year-old siblings, Tecumseh and Telisia.

Despite her difficulties in adopting, Manuel said ICWA is integral to maintaining heritage for displaced Native American children. Manuel disagrees with the argument that the law should consider children American first and Native second.

“I’m American, but I have Native roots. I want to know who I am and where I come from, and anybody would want to know that,” she said.

‘A stranger in my own homeland’

Janel Striped Wolf knows how important those cultural ties are to giving Native children a sense of belonging – she grew up without those roots.

Striped Wolf, 48, said that growing up in Boise, Idaho, she felt at age 10 like “a stranger in (her) own homeland.” There were no Native Americans where she grew up, and her white foster family discouraged her from exploring her Lakota heritage.

Striped Wolf, now an Arizona State University graduate student, began reconnecting with her community during her freshman year of college. She became a tribal liaison with Native American Connections in Phoenix, which assists members of urban and local nations, and tries to recruit Native Americans to become foster-certified.

She said family and kinship within Native communities are different than in non-Native families. Among the Lakota people, she said, the nuclear family often extends to uncles, aunts, cousins and others, as well as “hunkpa” relatives, who are honorary family members by tribal or clan tradition.

“They may not be biologically the mother or father, but they are because the ceremony took place, and you were adopted in the traditional way,” Striped Wolf said. 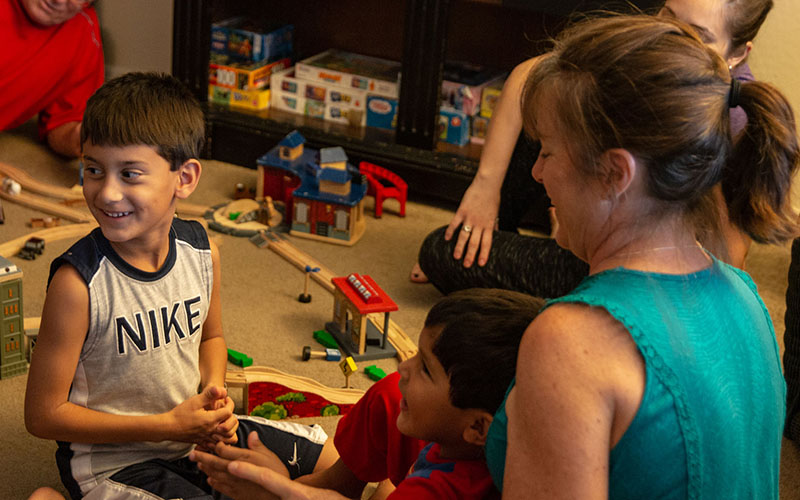 Tommy laughs while playing with Isaac and Mimi Condon. Three of the four Condon boys have relationships with their biological siblings. “When they become adults one day, they may really need each other,” Mimi Condon said. (Photo by Lindsay Walker/Special to Cronkite News)

In terms of identity, she believes the tribes’ notions of family go “beyond courtrooms or legal precedence” and predate the country’s founding. Not understanding that approach to family fuels the confusion over the need for ICWA, she said.

‘They all need our voices’

Mimi Condon knows how important it is for her children to understand their heritage. Although they call her their mother, her boys also call themselves members of the Yakama, Tohono O’odham and Salt River Pima-Maricopa Indian tribes.

All three of her Native children are registered with their respective tribes, and they and the Condon family attend cultural events each year, such as parades or powwows. Condon said her children are proud to be Native American.

But, as her children hunkered down after an afternoon of playing with toy trains, she also said she fought for what she believes is in her three adopted children’s best interests.

Condon now serves as a court-appointed special advocate for children in foster care, and has seen how damaging it can be for children to move in and out of different homes for years. The Condons followed all the procedures and adopted their children after attempts to reunify the boys with their biological parents were unsuccessful.

Condon said the lengths she went to in order to call David, Tommy and Isaac her sons made her family stronger as well as larger.

Elisia Manuel said she has no issue with non-Native families taking in Native children if they provide a loving, stable home – as long as they help those children stay connected to their culture.

Although barriers to adoption exist regardless of whom families are trying to adopt, Manuel said, families and volunteers should approach foster care with an open mind.

“We have too many kids in group homes or shelters that need parents, that need that one-on-one, need someone that says, ‘I love you, I care about you, and I’m going to help you,'” she said.

In addition to the need for more foster families, Condon said, the institutions surrounding adoptions should remember the heart of all cases: the children.

“They all need our voices,” she said.