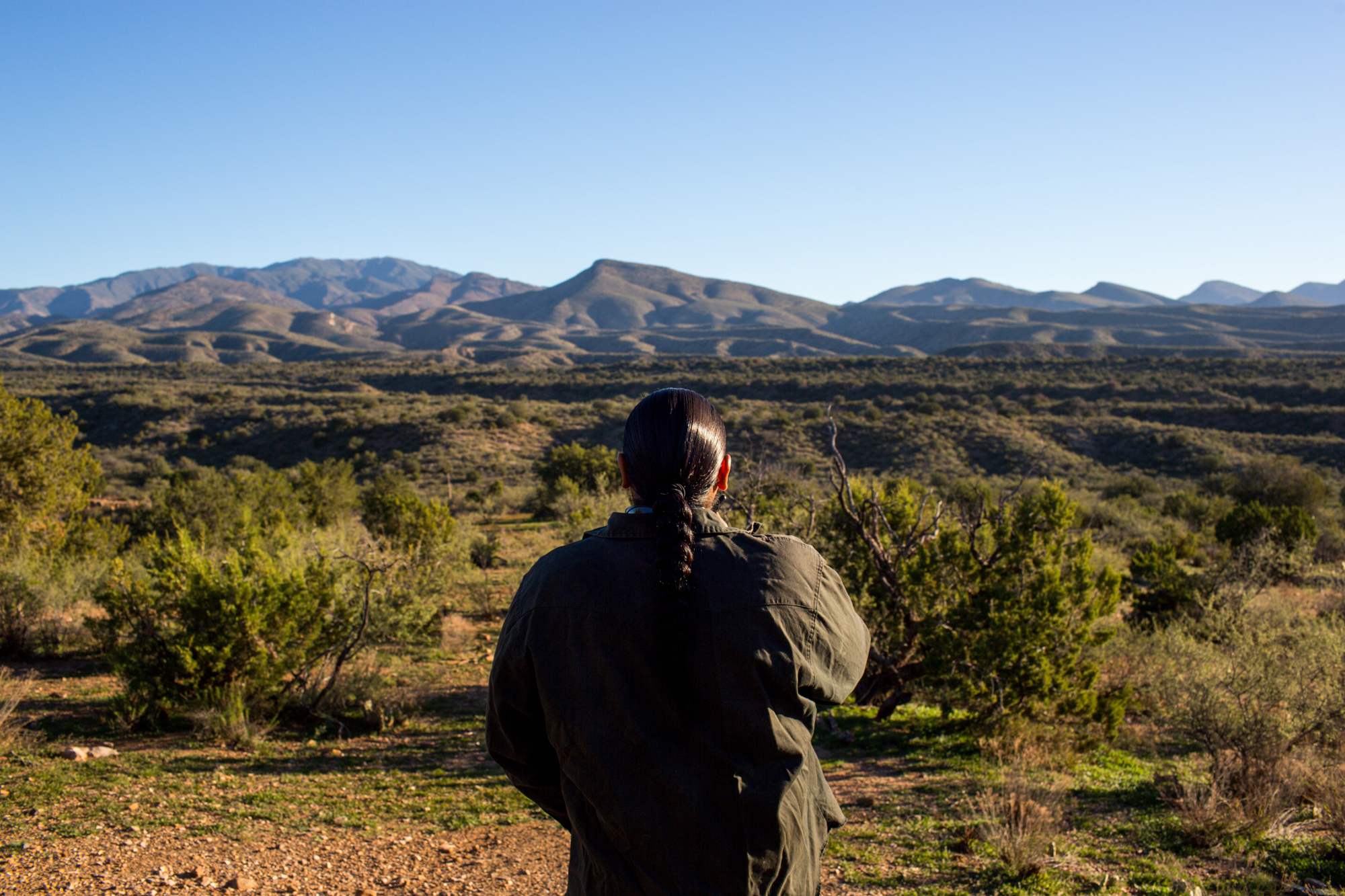 Thomas Alvarez of the Tohono O’odham Nation scans the terrain for a site north of Christmas that’s marked in his handheld GPS device. Alvarez leads one of several Traditional Cultural Property crews, which examine Native American sites that archaeologists have identified as possibly holding cultural, spiritual and historical significance. Data gathered by these tribal monitors could lead to protections from a proposed copper mine. (Photo by Nicole Neri/Cronkite News)

Resolution Copper plans to develop the mine east of Superior and predicts the mine will meet about a quarter of the nation’s demand for copper once it is in full production. The company says the mine, which may cost as much as $8 billion, is the “largest single investment in Arizona history.”

It has been passionately opposed by some Native Americans who say it will destroy a sacred site near Oak Flat Campground in the Tonto National Forest about 70 miles east of Phoenix.

The Resolution Copper-Oak Flat controversy is not lost on Shingoitewa, even though he’s a field director for a team of Native American “tribal monitors” chosen for a program funded by Resolution Copper and designed with help from the U.S. Forest Service.

The monitors are charged with documenting culturally significant Native American sites that could be affected by the mine, which is expected to cover 11 square miles. They hope their work will help save at least some of what’s at stake – the ancestral lands and cultural resources that are part of who they are.

“I think all of the tribes have the same thought process … we’d rather you not disturb this area. Our ancestors are here,” Shingoitewa, a Hopi, told Cronkite News. 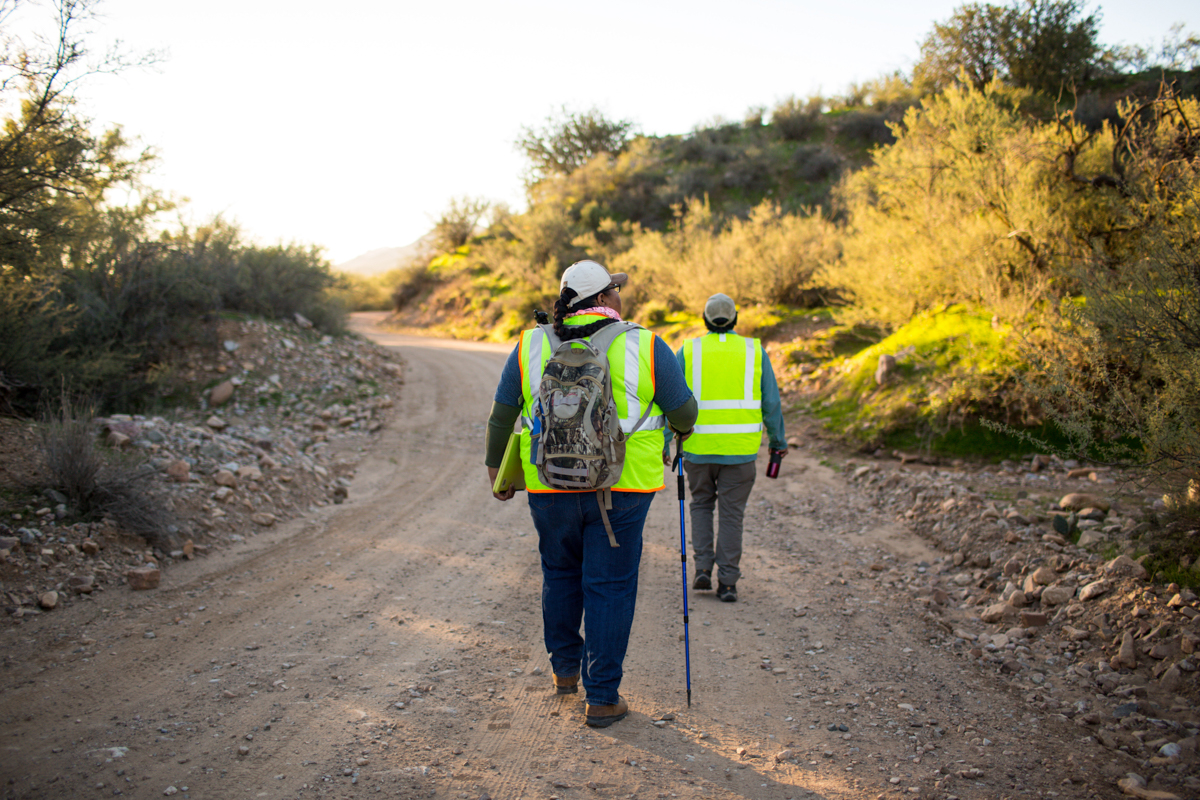 Dawn Rocha of the Hualapai-Yavapai-Apache Tribe and LeRoy Shingoitewa of the Hopi Tribe head out to document a cultural site south of Globe. Their work is funded by Resolution Copper, which is in the permitting process to open a huge mine near Superior. (Photo by Nicole Neri/Cronkite News)

Shingoitewa, who’s 40 with graying sideburns and an easy smile, lives in Mùnqapi, a village in northeastern Arizona. A graduate of the University of Arizona, he is a former wildlife technician for the Hopi Tribe. Tribal leaders tapped him to represent the Hopis in the monitoring program, which is part of an environmental-impact process necessary for Resolution Copper to get permits to operate the mine.

Shingoitewa, dressed in a baseball cap, a yellow vest, a protective long-sleeved blue shirt and hiking pants, walked with a small team that included tribal monitors, an archaeologist and a botanist. Seven of the 20 Native American tribes in Arizona have tribal monitors working on the mine project.

He began working as a tribal monitor when the program started in January. Members of this “TCP crew” – Traditional Cultural Property crew – visit sites archaeologists already have marked via coordinates. They detail cultural, spiritual and historical significance on a form that enables them to present significant sites that could be eligible for inclusion on the National Register of Historic Places, under the National Historic Preservation Act.

But the Preservation Act doesn’t guarantee a site valued by Native Americans will be protected “from disturbance and damage,” according to National Register Bulletin 38, “Guidelines for Evaluating and Documenting Traditional Cultural Properties.”

The bulletin states that “if in the final analysis the public interest demands that the property be sacrificed to the needs of the project, there is nothing in the National Historic Preservation Act that prohibits this.” 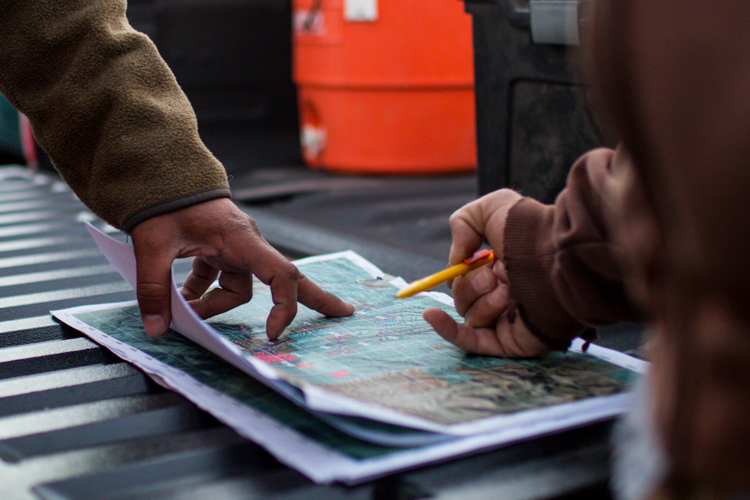 Tribal monitors and employees from WestLand Resources gather at sunrise to plan the day's activities. WestLand, an environmental consulting firm, handles the hiring and training of monitors. (Photo by Nicole Neri/Cronkite News) 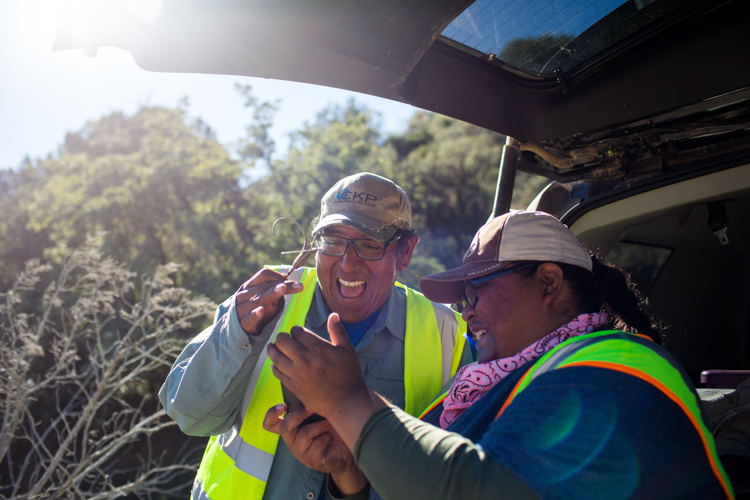 From sunrise to noon on one November day, the men and women on the monitoring crew visited two areas, finding pieces of prehistoric mortars, grinding stones, chipstones that might have been used for toolmaking and the flat stones of prehistoric archaeology. They also spotted wild plants Native Americans may have used for basket making, food and medicine.

To Shingoitewa, the land is spiritually, historically and culturally significant.

“That’s what’s unique about this area, is all our tribes came through here, at one time or another in history,” Shingoitewa said. “So one tribe cannot lay claim to this area … so having each tribal member working with us, we get their perspective of it.”

He said he didn’t want to see this landscape disturbed by mining activities. But he understood his limitations as a tribal monitor. He can’t decide where mining activities might take place. He can only point out Native American sites and hope mining officials decide to protect them. 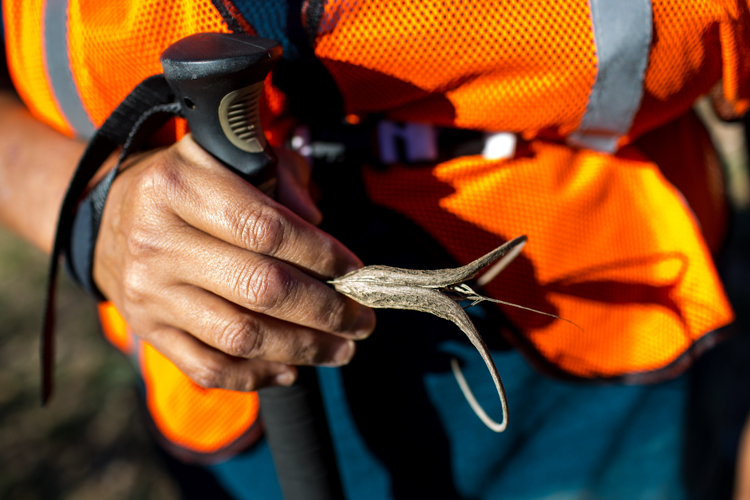 Anna Jackson of the Yavapai-Apache Tribe holds a part of a devil's claw plant, which can be used for basket-weaving. (Photo by Nicole Neri/Cronkite News) 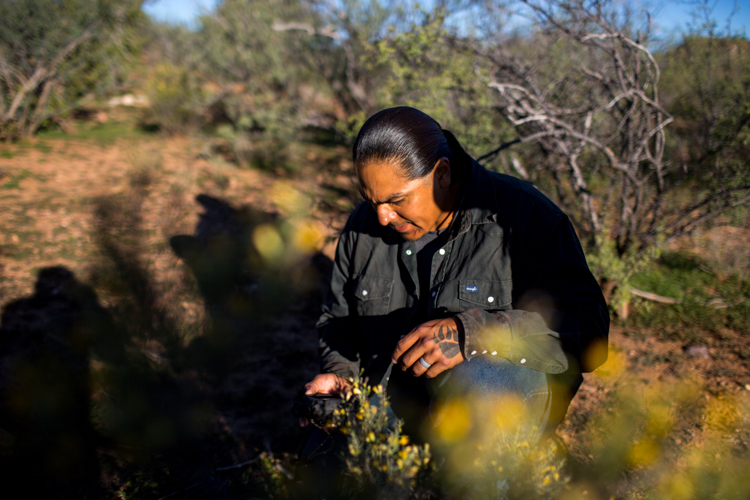 Resolution Copper is owned by two large international companies – Rio Tinto and BHP. The proposed “block cave” mine is expected to span 11 square miles and dig 7,000 feet below the surface, according to the project summary.

The Arizona Mining Reform Coalition, which includes major environmental groups and at least 20 tribal governments, oppose the mine. Environmentalists say the mine would harm water supplies and endangered and threatened species. Native Americans don’t want the mine to destroy ancestral remains, artifacts and lands, including Oak Flat, which hold religious, cultural and historical significance for some Native Americans.

Some opponents of the mine say the tribal monitoring program will have little effect on the outcome.

“The monitoring program only documents what will be destroyed,” Robin Silver, co-founder of the Center for Biological Diversity, wrote in a text message to Cronkite News.

“Resolution Copper does not care one bit about any cultural concerns, they’re just going through the motions and pretending,” he wrote.

The center is a member of the Arizona Mining Reform Coalition.

Over a week, Cronkite News left voicemails, emails and a Facebook message seeking comment on the tribal monitoring program from Apache Stronghold, a Native American group that battled the proposed mine for years. Apache Stronghold did not respond. 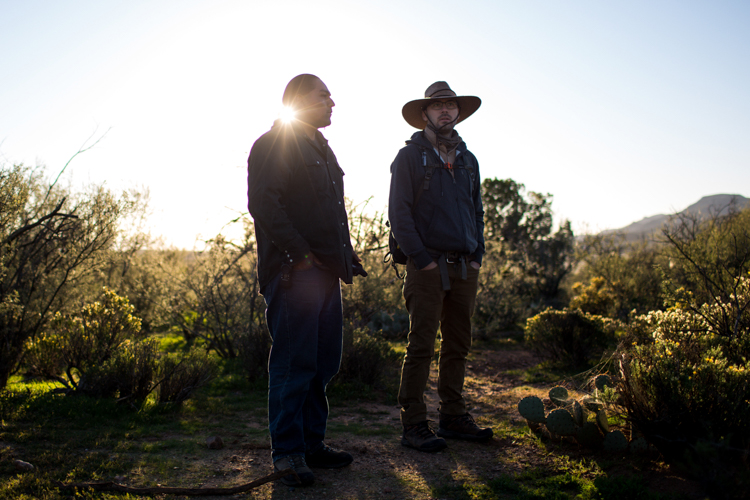 Thomas Alvarez of the Tohono O'odham Nation (left) talks about plants with biologist Daniel McNair of WestLand Resources. Seven tribes in Arizona have members working to detail sites of cultural, spiritual and historical significance that could be disturbed by a proposed mine. (Photo by Nicole Neri/Cronkite News) 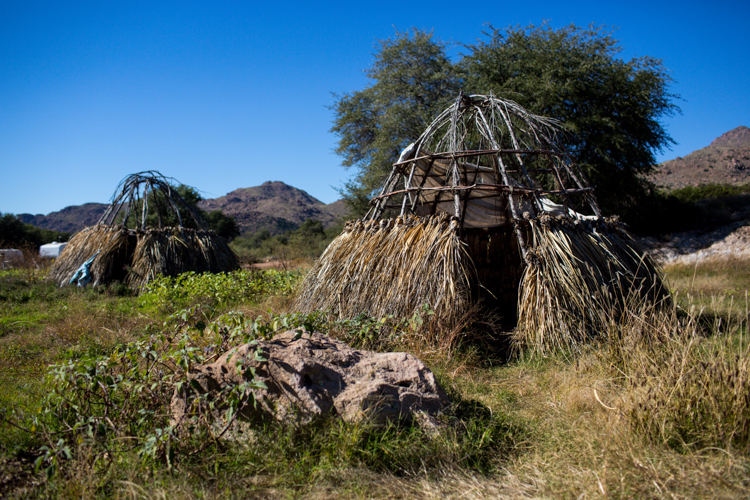 The Oak Flats Campground, considered a sacred site by several Arizona tribes, has been the site of several protests against a mine Resolution Copper wants to develop a east of Superior. The mine, which is in the permitting phase, would cost as much as $8 billion. (Photo by Nicole Neri/Cronkite News)

Oak Flat land was federally protected from development until it became part of a land exchange signed by President Barack Obama in 2014. Under the exchange, the federal government agreed to swap 2,422 acres of public land – including Oak Flat in the Tonto National Forest – to acquire 5,344 acres owned by the mining company.

It’s unclear when the copper mine would become fully operational. Resolution Copper is still in the permitting process, including getting approval by the federal government under the requirements of the National Environmental Policy Act, according to the company’s website.

The Tonto National Forest land the tribal monitors are surveying includes the proposed mine site and areas where tailings, pipelines and mine-related facilities could placed, said Victoria Peacey, senior manager of permitting and approvals for Resolution Copper, in an email to Cronkite News.

The U.S. Forest Service now is working on an Environmental Impact Statement necessary to move forward with permits for the mine. Information gathered by tribal monitors will be included in that report.

Peacey said Resolution Copper “is exceptionally proud” to fund the monitoring program but declined to say how much it costs. The monitors are hired through WestLand Resources, an environmental consulting firm contracted by Resolution Copper.

“They have historical and cultural connections with the land that we don’t have. We already need to complete these baseline studies as part of our environmental impact statement, so why not work together? I think this collaboration is really in line with being a good neighbor.”

In early October, she led a small group of trainees on a field session. Standing on a hill east of Roosevelt Lake, Carra noted it was likely that many prehistoric Native Americans traveled through this area and held ceremonies here.

“We’re at a point that every day, you’re learning something,” Carra said, as she watched trainees practice their observational skills. “I love this. I love being able to go back and record and say, ‘This is what I found. I think this is significant, significant to us.’ It’s just overall awesome.”

She recalled what it meant for her to stumble upon natural springs while surveying the Tonto National Forest land. She thought about her ancestors, wondering whether they camped at that very spot. Or if they’d prayed for rain, so the spring would continue to flow.

Carra enjoys working with people from different tribes who also are tied to this land and its uncertain future.

“The knowledge that each one of them individually, as tribal people, carry is more than I could have ever thought that I was going to be out here learning,” she said.

It’s not always easy. The hills are rocky and rugged and the hikes can be strenuous.

“I’m going to be 47 in a couple of months,” Carra said. “And some of these places are challenging.”

But when Carra reminds herself that her ancestors hiked these same hills, she chuckles and tells herself: “Who am I to be complaining? I can do this! It may take me a little while, but I can do it!” 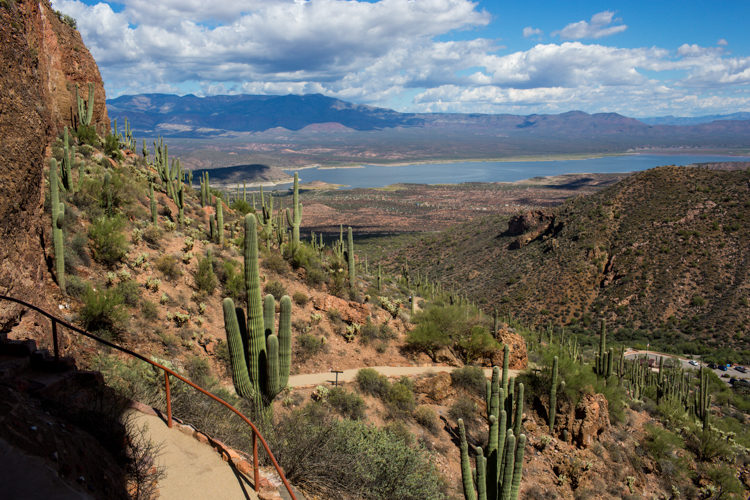 Roosevelt Lake spreads beneath an ancient cave dwelling investigated by tribal monitor trainees from seven the Arizona's 20 tribes. The monitor program was designed by the U.S. Forest Service and paid for by Resolution Copper. (Photo by Nicole Neri/Cronkite News) 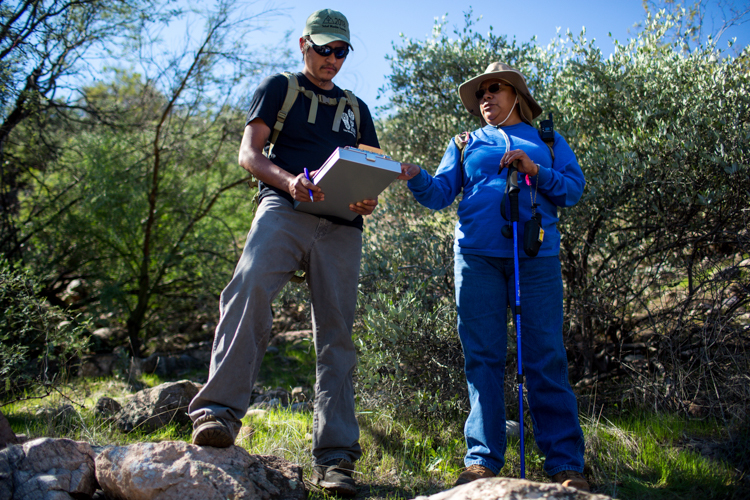 Bernadette Carra of the Ak-Chin Indian Community instructs Gifford Valdez, a Mescalero Apache, during a field training exercise on documenting sacred sites. Carra enjoys working with people from different tribes who also are tied to this land and its future. (Photo by Nicole Neri/Cronkite News)

Every Friday, Shingoitewa drives five hours home to Mùnqapi after a week in the field with his crew. It’s a long haul but worth it.

He’s a marathon runner, and sometimes he runs on one of the many nearby mesas. Other times, he likes to unwind watching TV: “Grace and Frankie,” “Mom,” “The Big Bang Theory” and “Golden Girls.”

They take him away from the challenges of the job – the paperwork, the management and the uncertainty of the future of the sites carefully documented by the monitors.

Shingoitewa and other monitors hope that by recording their findings, the sites and artifacts will be left alone.

“When we find things, we put them back to where it was at,” he said. “It was left for a reason, so we don’t mess with a lot of this stuff. We respect what’s here, who was here.

“We don’t want disturbance, we don’t want things changed, but the world is kind of changing in its own way, too, so we have to kind of be able to be flexible.”

And if the mine goes forward as expected, then “at least maybe we can influence part of the decision” and protect some ancestral sites, he said. 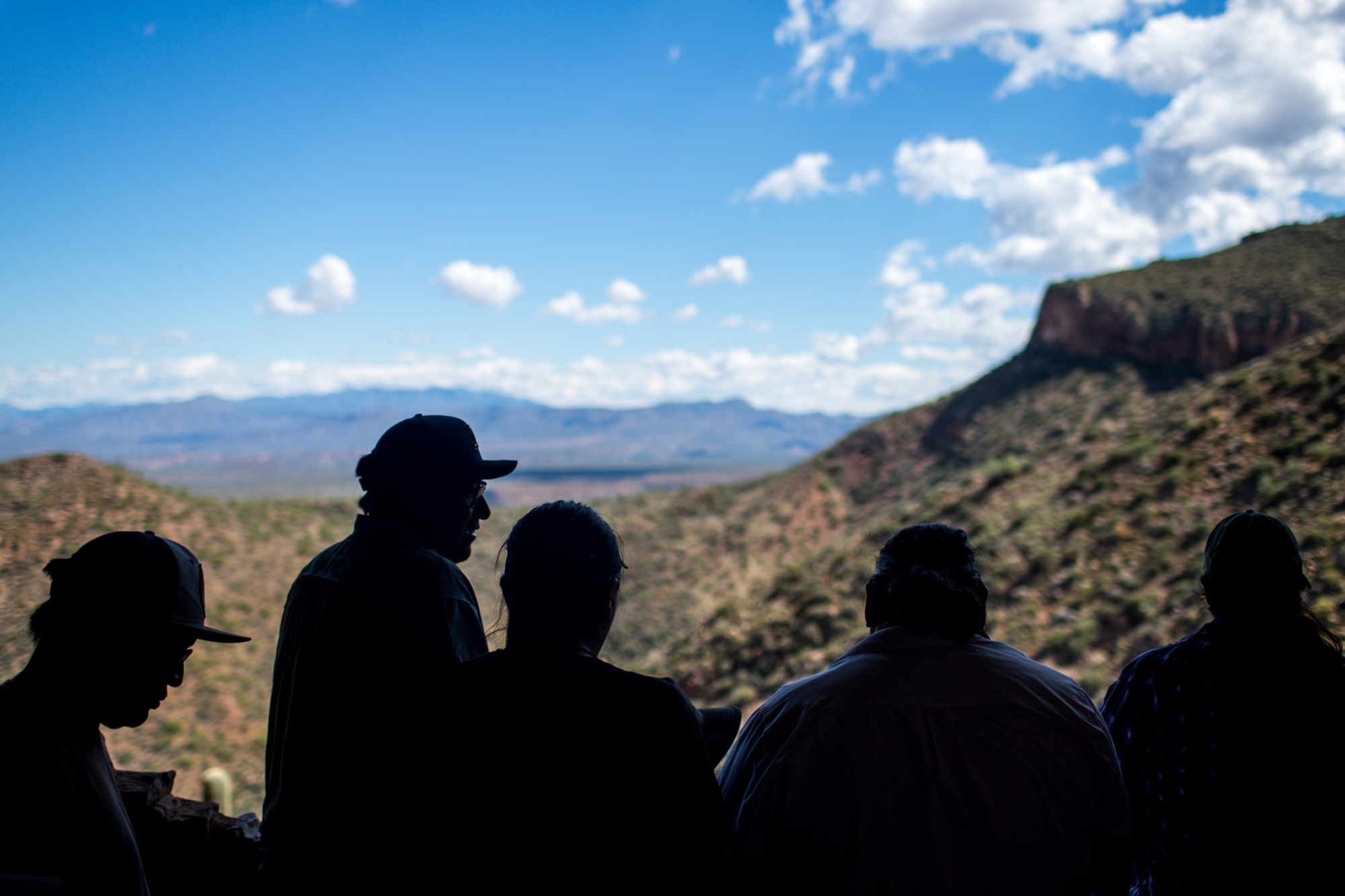 Members of Native American tribes look out from an ancient cave dwelling south of Globe during a field training exercise for tribal monitors. (Photo by Nicole Neri/ Cronkite News)