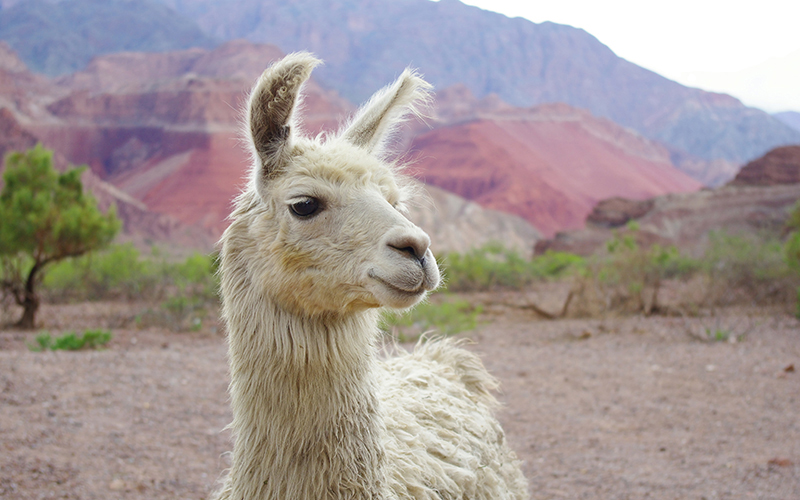 New research indicats llama antibodies could help prevent multiple strains of the flu in humans. Antibodies from llamas, such as this one in Cafayate, Argentina, are smaller than human antibodies and bind more easily to viruses. (Photo by Omar Andrés León Torres via Flickr/Creative Commons)

LA JOLLA, Calif. – Flu season is underway across the country, and it’s not too late for a flu shot. But rather than get vaccinations to combat influenza, people one day could get protection from llamas.

New research suggests llama antibodies – the protective proteins that mobilize to protect the body from viruses – may hold the key to helping humans stave off the flu, which costs the nation more than $10 billion a year, and last year killed more than 79,000 Americans.

A recent study published by a team of scientists at the Scripps Research Institute in La Jolla, in collaboration with Janssen: Pharmaceutical Companies of Johnson & Johnson, found that llama antibodies, synthesized into a “four-in-one” mega-protein and given to mice through a nasal spray, successfully protected the mice from 59 strains of influenza A and B.

Ian Wilson, the study’s senior co-author and a professor at Scripps Research Institute, said that because llama antibodies are so tiny, they can bind to the surface of the flu virus to keep it from replicating.

As explained by Smithsonian.org, vaccines work by injecting inert flu strains into the body to spur the production of antibodies. Those antibodies bind to the tip of a spiky surface protein, known as hemagglutinin, that mutates rapidly. The llama mega-antibody is tiny enough to fit into smaller and more recessed binding sites on the viral surface, so it’s more effective at stopping the flu virus.

The mice in the Scripps study were given fatal doses of 60 flu strains; the only strain that llama antibodies could not control was an avian flu not known to infect humans.

The llama antibodies would be administered through a nasal spray, rather than a shot.

“You’re delivering it to the upper respiratory tract, exactly where you’re getting infected, so you’re getting a higher concentration of antibodies in the site that you want,” Wilson said.

The Centers for Disease Control and Prevention reported that an estimated 79,400 people in the U.S. died during the 2017-18 flu season. Flu vaccines are regularly changed to adjust to predicted predominate strains of the virus, and although they help, they aren’t 100 percent effective.

“The tricky thing about the flu is that it’s changing all the time, which is why one vaccine doesn’t protect you for life,” said Dr. Deborah Lehman, a professor of clinical pediatrics at the David Geffen School of Medicine at UCLA. “You have to get a new vaccine every year.”

Lehman said efficacy rate of vaccines in some years is “around 50 percent, 60 percent. It’s well below 100 percent.”

“Even with good vaccine coverage, meaning that the virus that is circulating out there matches the virus that’s in the vaccine, we still have a significant number of people getting the flu, getting hospitalized with the flu, and actually dying from the flu,” she said.

“The end goal is to try and get some universal therapy or a vaccine for influenza virus,” Wilson said.