The San Pedro Riparian National Conservation Area is one of the projects that could receive funding under the Land and Water Conservation Fund, advocates say, but the program could expire. (Photo by Eric Vondy/Creative Commons) 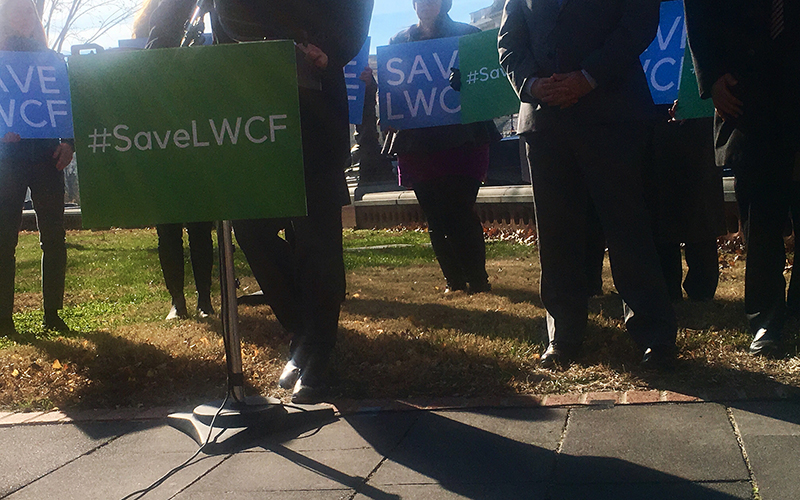 A bipartisan group of Senate and House members rallied to save the Land and Water Conservation Fund, which uses offshore oil lease revenues for parks and recreation projects and to buy public lands. (Photo by Alexis Egeland/Cronkite News)

WASHINGTON – Everybody in Washington seems to agree that the Land and Water Conservation Fund should be renewed, but chances of that happening still appear slim as the clock winds down on this Congress.

A bipartisan group of House and Senate lawmakers gathered Thursday to push for the decades-old fund, which directs revenues from offshore oil drilling toward public lands and recreation uses.

The fund, started in 1964, directs up to $900 million a year to the projects, supplemented by state and local funds. Over the years, more than 41,000 projects covering all 50 states have been funded, according to a coalition that supports LWCF, including more than $235 million in Arizona.

But the program expired Sept. 30 and while a House committee in September approved a bipartisan bill to permanently reauthorize the fund, there are only two weeks left for this Congress to act.

Rep. Ruben Gallego, D-Phoenix, called it a miracle that both sides of the aisle support the fund, saying that is evidence this is an important piece of conservation legislation for rural as well as urban areas.

“Even my district, which is an urban district, benefits from this,” Gallego said. “And as a whole, my whole state benefits, close to $290 million just from the recreational economy that comes from this.”

He was one of a handful of lawmakers and advocates calling for the fund to be permanently renewed and fully funded.

The program lapsed once before, in 2015, but was temporarily renewed. Republicans have long complained that the LWCF had become a “slush fund” for federal land acquisition, mostly in the West, and that local governments had been muscled out.

Rep. Rob Bishop, R-Utah, had backed an LWCF replacement that would direct only a small portion of the fund to land acquisition. Bishop, the chairman of the House Natural Resources Committee, wanted most of the money to go instead to things like park maintenance and historic battlefield protections.

But in September, Bishop reached a surprising compromise with Rep. Raul Grijalva, D-Tucson, to permanently renew and fully fund the program, dividing the money equally between state and federal governments.

That bill passed the committee and is now awaiting a vote by the full House.

“The fact that Republican leadership is not letting this go to the floor when it was negotiated by Republican members of the House, I think it’s really going to make their job a lot more difficult next year,” Gallego said. “So I think it’s in their best interest, really in a bipartisan way, to just bring this to the floor.”

Lynn Scarlett, chief external affairs officer for the Nature Conservancy, said the LWCF is not just about land, it’s about people as well. She said more and more businesses have been moving to be near “the great outdoors,” which shows that people love the nation’s public lands.

“The LWCF provides an investment in those lands that both attract people, economic action, health for our kids, so we’ve got to get it done,” Scarlett said. “And it doesn’t cost a dime.”

Scarlett said there is plenty of support for the program, but not enough time, with more-pressing issues like the farm bill and judicial nominations demanding time on the legislative calendar. The trick will be finding “a place to put it and get it done and really get the focus,” she said.

“So yes there’s support, but getting support for exactly what and in what legislative vehicle so that it has a chance to get a vote, that’s the challenge,” she said.

Supporters hold out hope that if the fund fails this year it will be in good hands next year when Grijalva, a longtime LWCF backer, is slated to become chairman of the Natural Resources Committee.

“Obviously, Grijalva is a huge champion,” Scarlett said. “If we don’t get it done now, he will be there, I think giving a good chance that this stays front and center stage.”