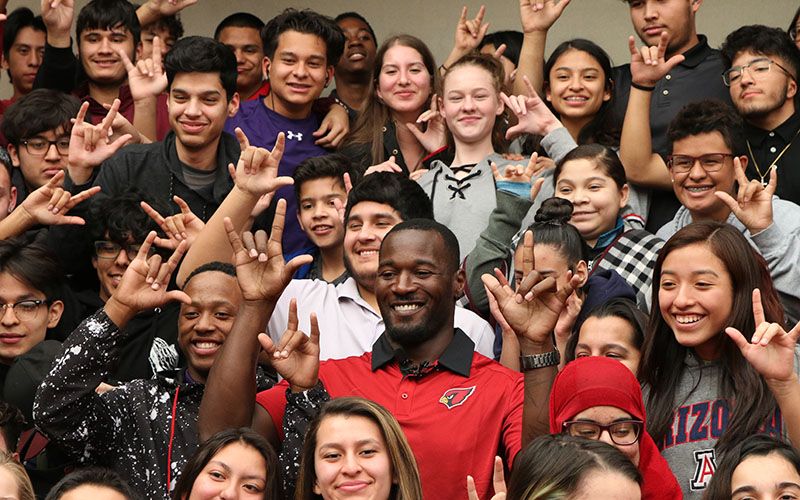 Derrick Coleman and a group of students put up the sign that stands for “love” in American Sign Language. The Cardinals player shared his unique story at the school’s pep rally. (Ricardo Ávila/Cronkite News)

PHOENIX – The vibrations of a drum and the cheers of students resounded through the packed gymnasium at Phoenix Day School for the Deaf. Many in the crowd use such vibrations to feel what others can hear.

Arizona Cardinals fullback Derrick Coleman, the NFL’s first legally deaf offensive player, took a microphone to address the students, staff members and others. Next to him, an American Sign Language interpreter communicated Coleman’s message of positivity to the crowd.

He hopes to use his national platform to inspire. His message Tuesday was simple: “Be the best you can be.”

“All of you guys have something that I didn’t have: People next to you that have the same problem as you,” said Coleman, who’s also an author and the founder of the No Excuses Foundation. 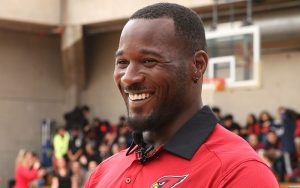 Derrick Coleman smiles before addressing the crowd at the Phoenix Day School for the Deaf. Coleman is the NFL’s first legally deaf offensive player. (Photo by Ricardo Ávila/Cronkite News)

Coleman began losing his hearing when he was 3 and was bullied for it while growing up in Southern California. He never learned how to sign because his family didn’t want him to feel he was different.

The former Vikings, Seahawks and Falcons player signed a one-year contract with the Cardinals in May. He has played in 56 games during his five NFL seasons and was a Super Bowl champion with Seattle in 2014. His season with the 2-9 Cardinals, however, has been less than prolific, totaling 20 yards of offense on two carries and two receptions. But that doesn’t faze Coleman, who said he overcame adversity by “staying positive and believing in myself.”

“There were times when I wanted to quit … but my friends, my family, they said no,” he said.

Coleman takes joy in sharing his story with others.

“Now I know that I’m not alone,” he said. “Everything you’re going through, I’ve been through.”

Coleman said everybody has problems, and nobody’s perfect: “Everyone has something to overcome.”

He said he first realized how influential he could be while attending UCLA. He was asked to speak to local high school kids about his journey.

“If I talk to a hundred kids and only get to one, that’s good with me because that’s a domino effect,” Coleman said.

That’s why he wrote his book “No Excuses: Growing up Deaf and Achieving My Super Bowl Dreams.” He also runs the Derrick L. Coleman Jr. No Excuse Foundation, whose objective is to “support, educate and advocate for the hearing-impaired community as they move to integrate into mainstream society.”

The fullback, who was joined Tuesday by team mascot Big Red and two Cardinals cheerleaders, fielded questions from the crowd.

“Have you won a lot this year?” a student asked.

“This year, I haven’t won a lot,” Coleman said amid laughter. “When you win, it feels really good.”

Sherri Collins, the executive director for the Arizona Commission for the Deaf and the Hard of Hearing, helped put together the event at Phoenix Day School for the Deaf.

“The goal is to improve quality of life for those who are deaf and hard of hearing in the state of Arizona,” Collins said. “It doesn’t mean because of our hearing loss, we can’t dream big.” 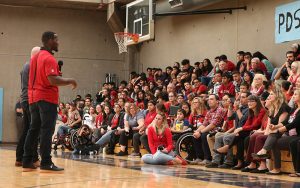 Derrick Coleman speaks to the crowd at the Phoenix Day School for the Deaf, next to an interpreter using American Sign Language. Coleman plays for the Arizona Cardinals and signed in 2018. (Ricardo Ávila/Cronkite News)

The commission serves the 1.1 million deaf and hard of hearing residents of Arizona, with the intention of providing community involvement and partnerships with local agencies and organizations.

“It’s important that the kids have the opportunity to meet someone who was very successful and overcame his challenges,” Collins said. “It’s an ongoing education and awareness to the general public.”

“To see people who they really look up to in the community come and take time out of their day to visit them here in their own environment just means a lot,” she said.

Phoenix Day School is part of the Arizona State Schools for the Deaf and the Blind, a state agency that serves more than 2,000 children from birth to 22 years, who are deaf, hard of hearing, blind, visually impaired or deafblind.

Fritz said she would like to see increased awareness of deaf and hard of hearing students.

“Showing the community that our kids can do just everything that any other kid in the state of Arizona can do,” she said. “Having them be provided the same opportunity.”

That is what Coleman’s appearance at the pep rally was all about and he returned to his theme, urging students to be themselves and be the best that they can be.

“The world is going to judge you good or bad,” he said. “The best thing you can do is be yourself.”