PHOENIX – Against the backdrop of tear gas and border closures in Tijuana over the weekend, several pro-immigrant groups are rushing to meet the increasing needs of asylum seekers.

One of those organizations is the Kino Border Initiative, a faith-based nonprofit organization known as KBI in Nogales, Arizona.

The Rev. Sean Carroll, the group’s executive director, said KBI collaborates with the Florence Immigrant and Refugee Rights Project in Arizona and the Catholic Legal Immigration Network, based in Washington, D.C. Both organizations provide legal services to migrants to help them better understand the asylum process.

“The Catholic Legal Immigration Network’s staff is coming periodically from D.C. to Nogales providing information to migrants so that they are better informed before they are received by U.S. customs,” Carroll said.

On Sunday, hundreds of migrants including mothers and their children, rushed past clouds of tear gas fired by U.S. Customs and Border Protection agents at the San Ysidro port of entry at the California-Mexico border, one of the busiest international crossings in the world. Border Patrol agents said the migrants were throwing rocks and trying to evade Mexican police. In response, Border Patrol agents temporarily shut down the border from about 11:30 a.m. to 6 p.m.

The migrants are part of the caravan of people, mostly from Guatemala, Honduras and El Salvador, that has been slowly making its way north for several months. An estimate 5,000 migrants are waiting in Tijuana now, hoping to present themselves to U.S. officials and seek asylum. That number is expected to grow – perhaps to as many as 10,000 – as more caravan members reach the border. Tijuana Mayor Juan Manuel Gastelum has declared a humanitarian crisis and asked the United Nations for aid, according to the Associated Press.

Carroll told KOLD TV in Tucson that 327 asylum seekers were waiting in Nogales, Sonora, as of Nov. 21. Although a large part of the caravan has not arrived in Arizona, some residents and business owners in Nogales expressed concerns over a similar situation playing out on their stretch of the border. 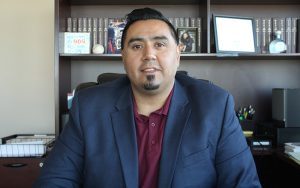 Under the Trump administration, Phoenix immigration lawyer Ray Ybarra Maldonado has seen a rise in the number of applications for asylum. (Photo by SuElen Rivera/Cronkite News)

In the past few years, the number of cases for people seeking asylum has increased, Phoenix immigration lawyer Ray Ybarra Maldonado said.

But the process is difficult.

“You have to prove that you have a fear or a realistic probability of returning to your country and you’re going to be exposed to a probable violence if you’re there based on certain categories, so those are the first two things you have to prove, which is tough,” Ybarra Maldonado said.

According the Department of Homeland Security, in 2016 the number of asylum applications grew by 39 percent from the year before.

“The last thing you have to prove is that fear or violence is related to you being a member of a certain social group, religion or nationality, or the general protections people speak of civil rights here in the country,” Ybarra Maldonado continued. “If you’re just afraid of the general narco violence in Mexico, you’re not going to win your case at all.”

Matthew Sussis, assistant director of communications for the Center for Immigration Studies in Washington D.C., a nonprofit research organization that opposes both illegal and legal immigration into the U.S., said one of the difficulties of allowing people into the country while their cases are being considered is getting them to attend their court hearing. A 2017 Justice Department report, however, shows 60 to 75 percent of non-detained migrants attend their court hearings.

“The difficulty is that we right now don’t have the capacity for several reasons to detain people once they pass credible-fear screenings,” Sussis said. “It’s very easy to just disappear into the interior of the country.

“So when we talk about fixing our asylum laws, we talk about closing those loopholes so people with legitimate asylum claims can still get in without taking in large numbers of people who have simply weak or made up claims of asylum.”

Salvador Macias, an immigration attorney in Phoenix, doesn’t foresee a slowdown of people seeking asylum in the U.S.

“I think as long as you have a very prosperous nation next to a country that has suffered decades of suppression, pain and poverty, you will always have immigrants trying to get to the more prosperous land,” he said.