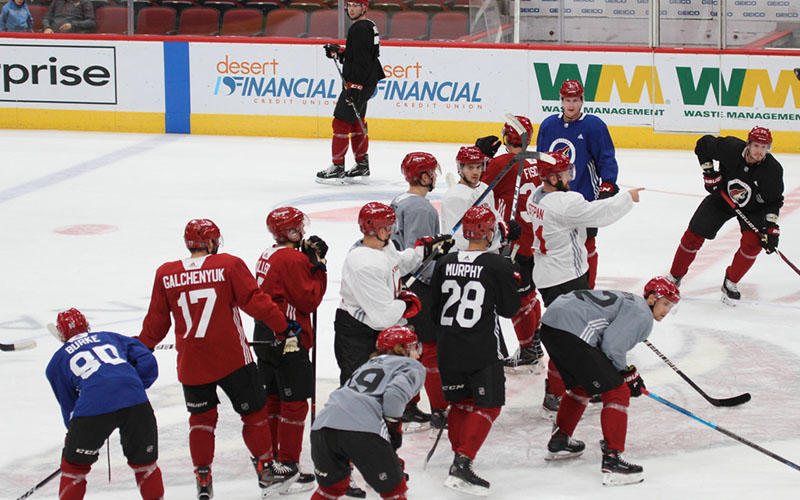 The Arizona Coyotes, who were 5-16-3 this time last year, are thankful for their improved record this season. (Sam Ficarro/Cronkite News)

GLENDALE – For the Arizona Coyotes, Thanksgiving marks a time where they can step away from the ice and focus on spending time with their families.

For Canadians Lawson Crouse and Dylan Strome, the holiday experience is a bit different.

Canada celebrated their Thanksgiving on Oct. 8, but for the players competing in Arizona, it has allowed their families to visit and enjoy a U.S. Thanksgiving.

“It’s a little bit different since I’m Canadian, but down here everyone is thankful,” Crouse said. “Everyone is always wishing a happy Thanksgiving. It’s just great to see in the community.

“I’ll probably just cook something with my girlfriend and dad.”

The Coyotes are also thankful for their much improved start to the season. At this time last season, Arizona sported a 5-16-3 record and sat at the bottom of the league standings.

Entering Wednesday’s game against the Vegas Golden Knights, the Coyotes have a record a 9-9-1 attempting to double their win total from last season at Thanksgiving.

The success should make enjoying the holiday much easier.

For Strome, his plans include hanging out with his family and Jakob Chychrun’s family.

“I didn’t get to see them on Canadian Thanksgiving a month ago,” Strome said. “We’re going to celebrate this Thanksgiving and it should be good.”

Strome said he is fortunate to have the families of his mom and dad living in close proximity, so he can spend time with both groups.

“I have a pretty big family so every year, we always get together and enjoy Thanksgiving,” Strome said. “Both sides of my family lived in the same area growing up, so it was very easy for both my mom’s side and my dad’s side to have one day with one and one day with the other.”

Crouse has fond memories of the holiday.

“Just getting together with your family and friends,” Crouse said. “Being thankful for everything that you have to enjoy in this life. That’s probably the biggest thing.”

Forward Christian Fischer, a Chicago native, normally has Thanksgiving at his home but with being in the NHL, the plan has been flipped.

“I got my whole family in town. My dad is going to be the grill master and cook for the day,” Fischer said. “Thanksgiving is always fun to have family and just kind of indulge in some good eating.”

As the years come and go, Fischer said he’s been separated from his family on Thanksgiving and is looking forward to just spending time with them.

After that, it will be back to possibly help the team continue its early success.

Strome acknowledged the team has had a better start this season and thinks there’s still room for improvement.

“I think we can still get better, but at the same time, we’ve kept ourselves in it. We’re still in the race so we just got to keep piling up the wins and take advantage of the home ice we have coming up,” Strome said. “If we do that, we’ll put ourselves in a real good position to be in the playoffs and that’s what we’re working towards.”

Crouse would like to see the team display more consistency. Since the team’s five-game winning streak ended on Nov. 2, the Coyotes have gone 2-4-1.

“We want to start winning a couple of games in a row here instead of winning one, losing one,” Crouse said. “Just want to get on a consistent basis. When you have a group like us, when we’re playing our game, we’re a tough team to beat.”

Fischer would like to see the team above .500 entering Thanksgiving.

“I think as a benchmark it would be nice to get over .500 just for the first 20 games. Obviously, we think we should probably be a little bit over that,” Fischer said. “We dropped some games we weren’t too proud of, but I think a win (Wednesday), we can look at it positively being over .500 after the first 20 games.”