Despite recently headed rhetoric and the deployment of U.S. troops to the border, Mexico’s ambassador said negotiators for both countries have been making progress on details of a new deal to replace the North American Free Trade Agreement. (Photo by Josh Denmark/U.S. Customs and Border Protection) 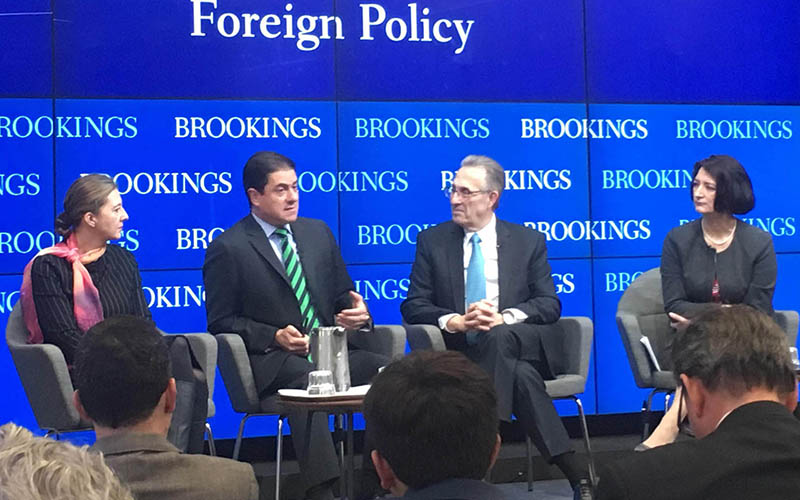 WASHINGTON – The Mexican ambassador to the U.S. said Tuesday he is confident final details can be worked out a new trade deal between the two countries and Canada, despite President Donald Trump’s sometimes disruptive border rhetoric.

Ambassador Gerónimo Gutiérrez Fernández said that Trump’s ability to drive the narrative made these negotiations on the proposed U.S.-Mexico-Canada Agreement much different than talks on its predecessor, the North American Free Trade Agreement.

Unlike the Clinton-era talks on NAFTA, negotiators on this agreement “were not dealing only with that (trade), but also with border security, immigration,” Gutiérrez said. He said that led Mexican President Enrique Peña Nieto to not just look at trade but to “comprehensively” examine the relationship between Mexico and the U.S.

Gutiérrez made the comments during a Brookings Institution panel that came a week after the International Trade Commission finished two days of hearings on the agreement – and after weeks in which Trump has focused on a northbound migrant caravan in Mexico, deploying U.S. troops to the border in response.

Even though Trump’s comments carry significant weight – “Irrespective of what anybody thinks, when the president of the United States says something, it’s important” – Gutiérrez said he believes congressional concerns about the trade deal will be addressed and was confident in its ratification.

“There’s a lot of value for the United States, in respect of the differences that we do have, in the security and immigration cooperation it has with Mexico,” he said.

That was echoed by former U.S. Ambassador to Mexico Earl Anthony Wayne, who said Trump’s rhetoric and actions regarding the caravan, while distracting, would not impact the outcome of negotiations.

“It contributed to the negative views of Mexicans on the United States,” Wayne said. “But again, the overwhelming interest of Mexico was to reach a trade agreement with the U.S., and then with Canada.”

Negotiators’ ability to remain above the political fray and work toward a trade deal drew praise from Arizona Chamber of Commerce Vice President Garrick Taylor.

“Credit to the negotiators that they were able to keep their heads down and keep negotiating despite some of the more colorful rhetoric coming from the White House,” Taylor said Tuesday.

While that “colorful” language led to constant refocusing by negotiators on what the issues at hand were, Gutiérrez said that maintaining a policy of “no surprises” with the United States was paramount.

But one surprise for both countries was the emergence of a caravan of Central American migrants who have been heading north through Mexico toward the United States for weeks. Gutiérrez said the caravan may have served as a “wake-up call” for Mexico, the U.S. and the Central American countries the migrants are fleeing.

“We need to think hard about how to work better amongst us to achieve a better management of the immigration phenomenon,” Gutierrez said. “There needs to be a recognition that mobility, many times for labor reasons, is there.”

With troops recently arriving at the port of entry in Nogales, Taylor noted Arizona is on the front line of the border issue, but also an important trading partner with Mexico. That’s why he said the chamber hopes Arizona’s congressional delegation will vote to ratify a new trade agreement.

“We recognize the already difficult challenge of balancing commerce and security, which is made even more difficult by the migrant caravan,” Taylor said.