Despite widespread criticism about the hire, Herm Edwards is confident he can take Arizona State to a new level. He will take over for Todd Graham, who was fired. (Photo courtesy Arizona State) 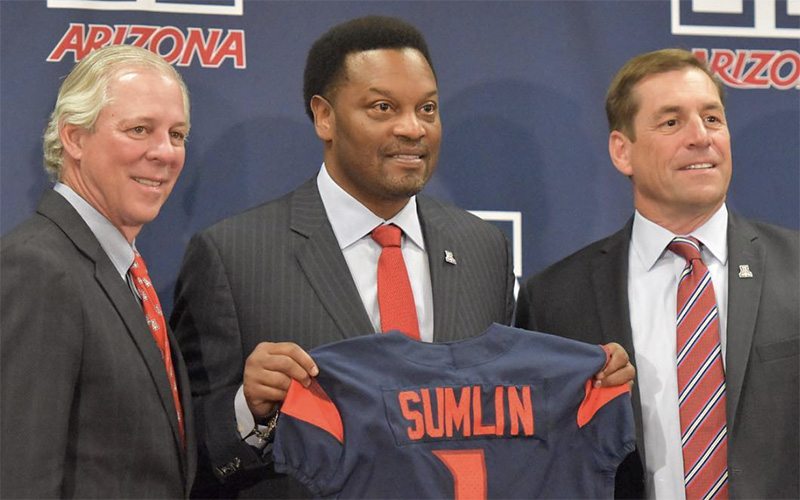 TEMPE – With the Pac-12 South title race now dead and gone for the Arizona State Sun Devils, the team has turned its focus to the University of Arizona and the battle for the Territorial Cup.

The Territorial Cup dates to 1899, and this season it features coaches who are experiencing it for the first time, together.

And there is plenty at stake.

Arizona coach Kevin Sumlin’s Wildcats have a 5-6 record and can qualify for a postseason bowl by beating the Sun Devils in Tucson Saturday.

ASU coach Herm Edwards and the Sun Devils have already secured a bowl berth with a 6-5 record, but a victory can move them up to a higher tier of bowls and assure a winning season, regardless of the bowl outcome. 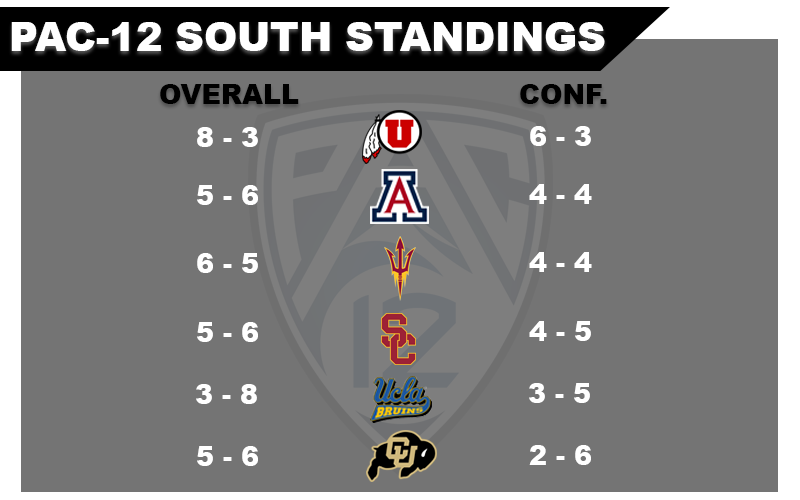 The Current PAC-12 South standings as of November 20, 2018. (Graphic by Isabella Sisneros/Cronkite News)

As of Monday afternoon, most college football platforms predicted ASU is likely to play in the Mitsubishi Motors Las Vegas Bowl or the Hyundai Sun Bowl in El Paso, Texas.

“If you win this game, it probably gets you a better seed in a bowl game,” Edwards said at his weekly media conference.

Both Edwards and Sumlin suggested that there won’t be as much bad blood between the teams as fans may expect, despite what is on the line. The two coaches are friends, and that could set the tone for their teams.

“A good friend of mine, yes sir,” Edwards said with a smile when asked about Sumlin on Monday.

Edwards and Sumlin go back to Sumlin’s time with Purdue, where he was a receivers coach from 1998-2000. Sumlin said he was part of an NFL internship program with the Tampa Bay Buccaneers during Tony Dungy’s stint as coach of the franchise, where he met Edwards, who was a Tampa Bay secondary coach who oversaw the internship.

They have remained friends, and when Sumlin was coaching at Texas A&M, he took advantage of his friend’s well-known motivational speaking skills.

“Two years ago, I had him come talk to our team at A&M,” Sumlin said. “He came and talked, and he talked about not just football, but about life. You guys have heard him speak, he’s energetic. He’s coached and played at the highest level.”

Edwards noted that when Sumlin took the position at Arizona, Edwards reached out to him with a letter.

Both coaches have experienced their share of rivalry games. Edwards played professionally for the Philadelphia Eagles, bitter rivals of the Dallas Cowboys. Sumlin coached in the Red River Showdown as an assistant at Oklahoma and the Apple Cup as a graduate assistant at Washington State, among other rivalries during his college coaching career.

Edwards took time Monday to reflect on perhaps his most bitter rival, which dates all the way back to his high school days.

Edwards attended Monterey High School in Seaside, California. His rival then was the Seaside Spartans.

“Never lost to the Spartans. Three-and-oh against the Spartans,” he said. “They were pretty good, too.”

The rivalry had added meaning for Edwards because he was expecting to attend Seaside High. However, because of desegregation, he was among the students bussed to Monterrey High.

“That’s where it all started for me,” he said. “I should have went to Seaside High. And everybody will tell you in that town that, you know what, one of the best players ever in our town had to go across the tracks to play at another school. So it was kind of bittersweet, because I grew up thinking I was going to Seaside High and then, ‘not so fast.’ ”

Edwards and Sumlin have quickly learned how important the Territorial Cup game is to their fans, boosters and alumni.

“Sometimes the intensity level in the parking lot is worse than on the field,” Sumlin said.

“Really emotional fan bases when it comes to this football game,” he said.

This weekend, both coaches will know all that it means to be involved in the rivalry.

“Until you’re involved in it, you really don’t get a feel for it,” Sumlin said.