Marines with the 7th Engineer Support Battalion place concertina wire at the Otay Mesa Port of Entry in California on Nov. 11, as part of the deployment of thousands of active-duty troops to support border security efforts. (Photo by Staff Sgt. Rubin J. Tan/U.S. Marine Corps)

WASHINGTON – National security experts and former military officials called on the administration to bring active-duty troops home from the border for Thanksgiving and end what they called a “needless” and politically motivated deployment.

“Exactly as predicted, this deployment of thousands of U.S. troops to our southern border has turned out to be nothing more than what I would call a political stunt,” said Ned Price, director of policy and communications at National Security Action and a former special assistant to President Barack Obama.

The call to withdraw troops came as the Department of Homeland Security reiterated what it called the need to “harden” ports of entry against a rush of immigrants now headed to the border, a number DHS officials said could now be as high as 10,500 people.

In a briefing with reporters Monday, officials said DHS is taking extra security measures and further restricting traffic at ports of entry near San Diego in response to overnight “chatter” about a potential mass rush over the border by migrants.

Operations at the nation’s busiest port of entry, San Ysidro, were suspended for three hours Monday and an additional eight lanes of traffic shut down as both American and Mexican resources at the border were reinforced.

“Late last night we started to get information of potential waves or groups of individuals who were communicating about an incursion into our ports of entry, attempting to run by our ports of entry,” which led to Monday’s actions, one official said, speaking on background.

The officials said they have “identified more than 500 criminals traveling with the caravan” of Central American migrants, and that most of the immigrants are single men who are likely economic migrants, and thus ineligible for asylum.

“Our generous asylum system is being abused,” one official said.

But on a conference call hosted Monday by immigration reform group America’s Voice, advocates and experts said the threats posed by a caravan of Central American migrants had been ginned up for political purposes. 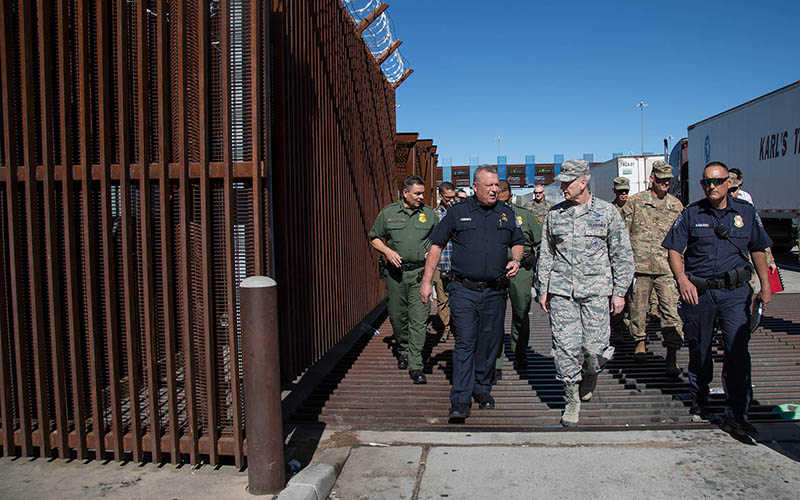 Michael Humphries, Customs and Border Protection director for the Port of Nogales (in blue), briefs Air Force Gen. Terrence J. O’Shaughnessy during a tour of the border at Nogales on Nov. 7, shortly after active-duty troops were deployed there. (Photo by Spec. Hosannah Vickery/U.S. Army)

“It’s estimated this deployment could cost hundreds of millions of dollars, while also separating our service members from their families during the holiday period for absolutely no valid reason. But the costs to America’s reputation are just as high,” Price said.

Retired Maj. Gen. Peter S. Cooke called the deployment “extremely unwise” and an unnecessary burden on soldiers that “does affect our national security significantly for many reasons.”

“Somebody needs to speak out for their overall welfare,” Cooke said. “It goes against every decision-making process and matrix that we’ve been taught in the military.”

DHS officials said that it needed those troops to harden ports of entry, to assist with expanding barriers and control measures along the border, as well as logistical and medical support. Immigration and Customs Enforcement has also diverted additional resources to the border to deal with the “influx of individuals that are now in custody as result of the increased crossings.”

Of thousands of soldiers deployed to the border, an Army officer said Monday that more than 1,500 have been based since Oct. 29 at Fort Huachuca and Davis-Monthan Air Force Base in southeastern Arizona, where they are scheduled to remain through Dec. 15.

“Troops with engineering capabilities have been tasked to provide temporary vehicle barriers, concertina wire and fencing around ports of entry,” Lt. Marenda Figgs said in an email. The “focus remains on engineers and force protection.”

Politico reported Monday that some troops could start to return home in the coming days as certain barrier installations are completed. But critics said no amount of time at the border is justified.

“This isn’t simply an issue of bad politics, but … policies that are seriously having a detrimental effect on the health, morale, and welfare of these soldiers,” said Bishop Garrison, interim executive director for Truman National Security Project and a decorated combat veteran.

“I can tell you personally as a veteran,” Garrison said. “Being away from your friends, your family, your loved ones is one of the most difficult and demoralizing things you can put soldiers through.”

Price said he hopes troops sent to the border will not be forgotten as they spend Thanksgiving away from home.

“The caravan was the stuff of headlines for weeks prior to the election when President Trump and his allies in Congress were talking about it,” Price said. “Now that they are virtually silent on it, I certainly hope that the plights and the hardships that have been required by the administration of our men and women in uniform will be covered with equal intensity.”