A Los Angeles County firefighter helps put out hotspot in a neighborhood razed by the Woolsey Fire on Monday in Malibu, Calif. (Photo by Marcus Yam/Los Angeles Times via Getty Images)

WESTLAKE VILLAGE, Calif. – The cul-de-sac off Blackbird Road looks idyllic, with green trees and inviting homes. Yet, a walk through this neighborhood reveals the scars left from the Woolsey Fire: a front yard blackened by flames, a charred wooden gate, a trampoline ripped at the seams.

These are reminders of how lucky Westlake Village was when homes in so many other neighborhoods in the hills west of Los Angeles were lost. So far, more than 600 structures have been destroyed, displacing thousands of people.

“It came very close,” Bita Farrell said as she pointed out the fire damage. “There’s actually almost like a doughnut of crispiness like, fire, burnt around our house.”

Farrell, who has lived in her home for just more than two years, was away when the wildfire roared through Westlake Village. She returned to a burned backyard; a charred skeleton is all that remains of her son’s treehouse. 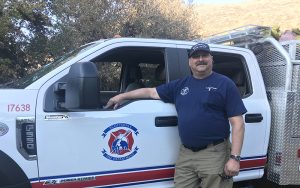 Capt. Al DiBenedetto of the Scottsdale Fire Department and his crew have been in California since Saturday, working long days to locate hotspots that could reignite. He says they’ll stay as long as needed. (Photo by Emily Fohr/Cronkite News)

Despite these damages, Farrell only had words of thanks for the California firefighters who helped save her home and for the Arizona firefighters in her neighborhood who are mopping up hotspots.

“We’re just grateful we have our home,” Farrell said. “We’re grateful to these firefighters.”

Farrell nodded her head toward firefighters from the Scottsdale Fire Department who were returning from the hills behind her house.

The Arizona Department of Forestry and Fire Management has sent more than 160 Arizona firefighters to Southern California to battle the Woolsey Fire, which broke out Nov. 8 and has killed three people and destroyed more than 98,000 acres. It was 69 percent contained as of Friday, according to Cal Fire.

Scottsdale fire Capt. Al DiBenedetto and his crew – Blake Miller, Rick Stuve and Jarrett Stephens – have been in California since Saturday, working night and day to locate hotspots, which are areas of heat that have the potential to start another fire, and islands of unburned fuel in the rugged terrain.

“All the Arizona units are working as what we’d call task forces and strike teams, which is a grouping of five like-and-kind units under a common leader with common communications.” DiBenedetto said.

California’s coastal winds are one of the biggest challenges with the Woolsey Fire.

“We have the Santa Ana winds. We have on-shore winds. We have off-shore winds, changing winds,” DiBenedetto said. “Being from Arizona, we’re not really familiar with their wind patterns, so for us that is a major heads-up and a safety factor that we pay very close attention to.”

DiBenedetto isn’t sure how much longer his crew will be needed.

“We will stay as long as they need us,” he said. “If they’re done with using us here on the Woolsey, and they want us to go to another fire, we’ll go to that fire.”