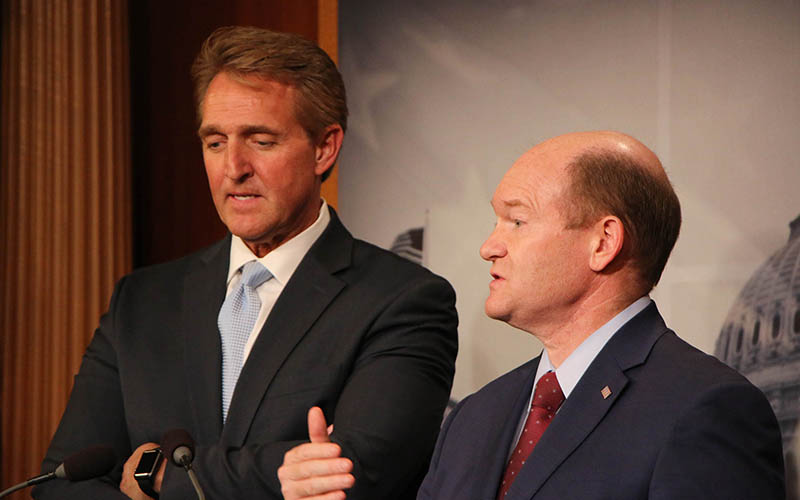 Sens. Jeff Flake, R-Arizona (left) and Chris Coons, D-Delaware, called for a vote on a bill that would protect Special Counsel Robert Mueller’s investigation into Russian interference in the 2016 elections. (Photo by Vandana Ravikumar/Cronkite News)

WASHINGTON – Sen. Jeff Flake said Wednesday he will oppose all judicial confirmations until the Senate is allowed to vote on a bill to keep the White House from interfering in an investigation of possible Russian meddling in the 2016 election.

The Arizona Republican was joined by Sen. Chris Coons, D-Delaware, on the floor of the Senate to demand a vote on the Special Counsel Independence and Integrity Act, which won Judiciary Committee approval in April but has been blocked by Senate leaders since.

Both Flake and Coons pointed to the recent ouster by President Donald Trump of Attorney General Jeff Sessions, whom the president had long criticized for not doing enough to rein in Special Counsel Robert Mueller and his Russia probe. Trump has repeatedly referred to the investigation as baseless and a witch hunt.

“Special Counsel Mueller was not in any danger” when the committee approved the bill in April, Flake said. “That clearly is not the case now.”

But Senate Majority Leader Mitch McConnell said earlier Wednesday that he has not changed his position that, while he agrees that the Mueller investigation should be allowed to continue, there is no need to for special legislation to protect it.

“We know how the president feels about the Mueller investigation, but he’s never said he wants to shut it down, I’ve never heard anybody down there say they want to shut it down,” McConnell said. “I think it’s in no danger and so I don’t think any legislation’s necessary.” 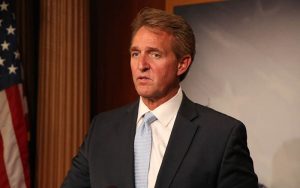 After accepting Sessions’ resignation the day after Election Day, however, Trump named Sessions’ chief of staff, Matthew Whitaker, as acting attorney general. But critics have pointed to Whitaker’s previous criticism of the Russia investigation.

Coons criticized Whitaker as someone whose “legal ideas” are “well outside of the mainstream” and who lacks the experience to serve as attorney general.

“The larger issue that concerns me … is public statements made a year ago by Matthew Whitaker, now the acting attorney general of the United States, questioning the validity and conduct of the special counsel’s investigation,” Coons said.

Flake was also concerned that, besides being what he called an attempt to obstruct the Russia investigation, Trump’s appointment of Whitaker was unconstitutional because he has not been confirmed by the Senate. Typically, Deputy Attorney General Rod Rosenstein – who is overseeing the Russia probe – would be named acting attorney general.

“When you have the Attorney General fired and when you have the oversight for the investigation is moved to someone who has not received Senate confirmation, who has expressed open hostility to the Mueller investigation, there’s a problem, and I think most of our colleagues feel the same way,” Flake said.

He added that Whitaker’s appointment “undercuts our entire system of justice here that we’ve enjoyed for a couple of centuries.”

Both senators said that if permanently appointed, Whitaker should be confirmed by the Senate first and then should recuse himself from overseeing the Russia investigation.

“I think that he shouldn’t be in that position at all, to have oversight over the investigation,” Flake said. “That’s what feels unconstitutional.”

In the meantime, Flake said he plans withhold his vote for any judicial nominee in an effort to bring the bill to the Senate floor. He’s confident that the bill, which passed the committee on a 14-7 vote, can pass the full Senate if brought up.

Flake conceded that his vote alone may not be enough to block a nominee, but it’s one of the few ways he can leverage his power before he leaves the Senate in January.

“Now, theoretically, if the vice president comes and breaks the tie and all Republicans for, Democrats against, they can still pass, so that’s not where my leverage is, but I’ll use what I have,” he said.

“I’m fully prepared to carry through with this,” Flake said. “We just need a vote.”