Code Pink protester Caroline Debnam said she felt compelled to speak out against what she called the anti-religious hate espoused by some of the groups represented at the event. (Photo by Alexis Egeland/Cronkite News) 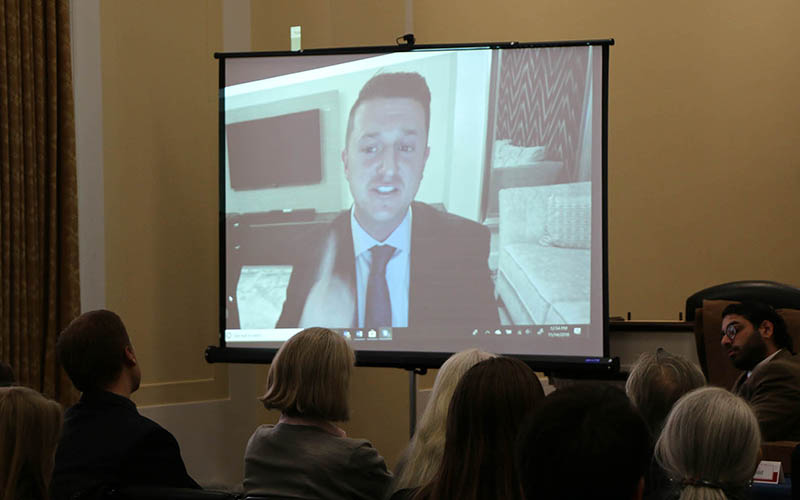 WASHINGTON – Rep. Paul Gosar, R-Prescott, had to call Capitol Police after protesters disrupted a forum he joined with right-wing groups complaining about their social media access being restricted over comments on immigration and Islamic law.

Gosar said he was at the Middle East Forum event with representatives of Breitbart London and the English Defence League, among others, to support their right to free speech and dissent, but protesters shouted him and others down as racists and extremists.

“Shame on all of you for supporting this person,” Debnam yelled at Gosar during the protest. “He’s a racist.”

Robinson, whose real name is Stephen Yaxley-Lennon, has been identified by the Southern Poverty Law Center as a “British Islamophobe” and by the Anti-Defamation League as an “anti-Muslim extremist.”

Robinson was recently banned by PayPal for violating its prohibition against promoting “hate, violence, racial or other forms of intolerance,” and has been banned by Twitter, according to published reports. He had to appear at Wednesday’s event by videoconference after being denied a visa to visit the U.S.

Gosar said in a statement Wednesday that it was the protesters who “expressed hatred and fear of freedom of speech.”

“Unfortunately during today’s event, protesters decided to express their disagreement with a demonstration rather than engaging in dialogue,” his statement said.

Debnam was joined by fellow Code Pink protester Lily Tajaddini who said her Muslim upbringing left her scared by the discussion she heard in the forum.

“As someone who is of Middle Eastern descent and someone who grew up in a Muslim family, I felt very attacked by all of this,” Tajaddini said after being escorted out of the event by police. “Seeing the rise in hate crimes in the U.S., I am worried and scared and I felt it is my duty to be here and to speak out.”

.@mikeyfranklin tells @RepGosar where to go for teaming up with British fascist Stephen Yaxley (aka “Tommy Robinson”). Totally disrupted the Middle East Forum event for about 20 mins. More footage to follow pic.twitter.com/fdzy5TDl2k

Debnam said that once she and Tajaddini stood up and voiced their opinions, they were written off as dangerous, nasty, bratty feminists.

“At first it was pretty standard, like, ‘We just care about promoting peace in America and combating the threat that Islamism poses,'” she said. “But then once we stood up, it turned.”

Former Breitbart London editor Raheem Kassam said “de-platforming” is a symptom of the “greater sickness” of intolerance, which he believes could lead to the end of humanity as we know it.

He accused social media organizations of blaming algorithms for the decision to remove groups’ access, instead of holding individuals responsible.

“How do you prosecute or persecute an algorithm for discriminating and for taking someone’s speech away?” Kassam asked. “And who gets held accountable in that process?”

After calling police to remove the protesters, Gosar returned to the panel to claim that the country was headed in a totalitarian direction by “disarming society” and “controlling thought through censorship of citizens.”

He said the de-platforming of right-wing accounts is not about ending hate speech, but about silencing ideas the social media organizations disagree with.

“People don’t like to tolerate our speech,” he said, “but we’re supposed to endure theirs.”