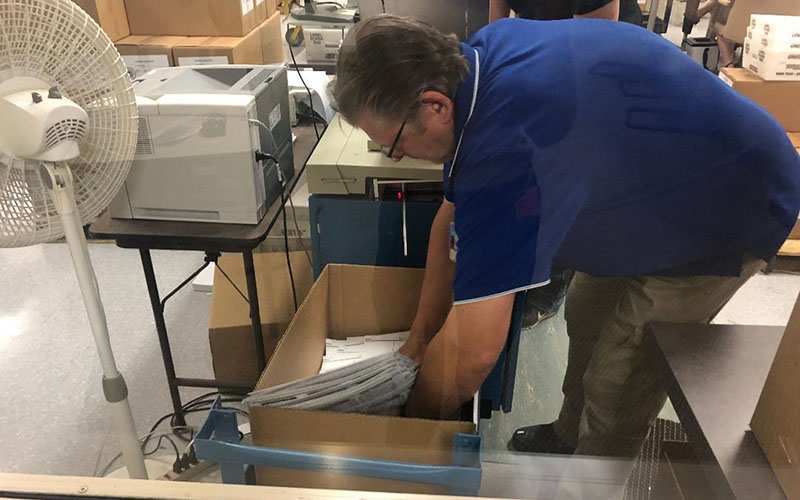 Maricopa County operated more than 500 locations in Tuesday’s election, a reduction of about 100 to 200 from the 2016 election. (Photo by SuElen Rivera/Cronkite News)

PHOENIX – Updated election results will be announced at 5 p.m. daily, starting Thursday, and will continue until every ballot is verified and counted, Maricopa County Recorder Adrian Fontes said.

Fontes, who took office in 2017 and was widely criticized for difficulties in Arizona’s Aug. 28 primary election, answered questions on several issues that arose Tuesday, including a five-minute systemwide computer crash, ballot-printer malfunctions, long lines even after the polls closed at 7 p.m. and a polling site that had been foreclosed on the night before.

The county operated more than 500 locations in Tuesday’s election, a reduction of about 100 to 200 from the 2016 election. Fontes said part of the reason was 2018 is not a presidential election year. However, voter turnout Tuesday shattered the record for a midterm election. 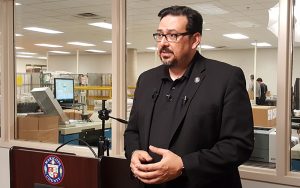 “We looked at how do you administer the election at each of these spaces, not whether or not you have the spaces.”

Early on Election Day, Fontes described the problems as “hiccups,” telling reporters, “That’s what happens every time in every jurisdiction in the United States.”

The county recorder supports the designation of more “bonus vote centers,” where voters can cast ballots regardless of their precinct. That would reduce voter confusion and cost less than polling places, Fontes contends. The county had 40 vote centers open Tuesday.

Alex Gulotta, Arizona director of All Voting Is Local, a campaign that focuses on ensuring eligible voters have the ability to cast ballots, said many Arizona voters in previous years had problems with voting machines and long hours in line. When the system doesn’t work the way people want it to, Gulotta said, it results in “voter fatigue.”

“Sometimes people leave the polling place. People have to get to work. People can’t wait for an hour or two hours,” he said. “It’s incumbent upon us to create a system where that isn’t required.”

Waiting is only one of Gulotta’s concerns.

“When you look at what we spend on elections and administration, that’s where the problem is,” he said. “You can’t have a system that spends hundreds of millions of dollars and fund it with a million or a couple millions of dollars.”

Gulotta would like to see voting take no longer than 30 minutes, and for election officials to act sooner to set up polls and have them ready at 6 a.m. on Election Day.

“I’m sure the recorder’s goal is that same goal, but unless we invest in the system in more better and meaningful ways, that will never happen,” he said.

Zanita Spence was one of those with “voter fatigue.” She waited for an hour and half at Chandler City Hall on Tuesday but left because her ballot still hadn’t been printed while she was there.

“I don’t know what the problem is; nothing is being explained,” she said.

Unless someone has the day off and can wait all day, she suggested, “do an early ballot.”