Kado Stewart, program director at one.n.ten, leads an impromptu drum circle at a voting rally for transgender people and their allies at the Arizona Capitol on Friday. (Photo by Nicole Neri/Cronkite News)

PHOENIX – LGBTQ members and their allies rallied Friday at the state Capitol after reports indicating the Trump administration is considering narrowly defining gender as determined at birth and unchangeable.

With this year’s midterm election at hand, about 100 members of the transgender community and their supporters gathered to stand up against those who want to change how gender is defined and to motivate one another to vote, according to Brianna Westbrook of Equality for Arizona, a non-profit organization and advocacy group.

“The main purpose of this event was not only to unite our community at a time where we’re being attacked but to encourage, to participate in the electoral process,” Westbrook said.

According to a memo obtained by the New York Times, people who have transitioned would need to revert to the birth sex on all legal documents, including birth certificates, driver’s licenses, identification cards, passports and Social Security cards. If adopted, the definition could remove protections of transgender people under federal civil rights law, according to the Times.

Westbrook stressed the importance of voting in order to deter the Trump administration from passing policies that are direct attacks on gays, lesbians, bisexuals and transgender people.

She encouraged people to “vote on Tuesday because that’s how we fight back against policies that are ripped apart, that attack us as a community, is by voting. By getting involved in the political process.” 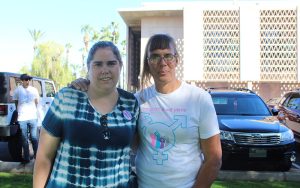 Regardless of the efforts made by rally supporters and organizers, some within the LGBTQ community are afraid.

“The first thing I felt was this hurt and fear,” said Claire Swinford, a trans woman who attended Friday’s rally. “This deep abiding fear of what tomorrow could be. What happens if this passes? What is that going to do to my life?”

Her wife, Jill Ekegren, is a trans ally who plans to use her voice and vote.

“Our trans community will prevail and it’s going to take a lot of work, but Tuesday there is an election going on and we can get rid of some of those scraps and get progressives in there to be allies and be the champions that are so desperately needed,” Ekegren said.

According to White House officials, the Department of Health and Human Services will propose a new definition by the end of this year to the Department of Justice. In the leaked memo, HHS officials argued that key government agencies – the Departments of Education, Justice, Labor and HHS – need to adopt an explicit and uniform definition of gender as determined “on a biological basis that is clear, grounded in science, objective and administrable.”