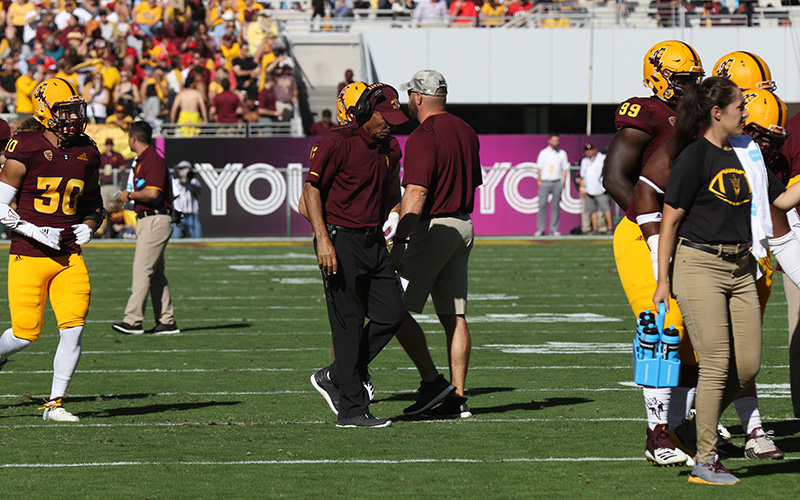 ASU head coach Herm Edwards isn’t looking too far into the future after the 38-20 win over Utah. (Bella Sisneros/Cronkite News)

TEMPE – Two weeks can change everything for a college football team.

Just ask the Arizona State Sun Devils, who came off a second consecutive 7-point loss October 18 against Stanford. The hope of ASU even attaining six victories to become eligible for a postseason bowl game was in question.

After the loss to the Cardinal, ASU quarterback Manny Wilkins entered the post-game press conference visibly emotional, tears in his eyes after completing a checkdown pass inbounds that allowed time to expire to end the game.

More important, ASU is the only team that controls its own destiny in the Pac-12 South Division.

“I think it’s this week,” Edwards said. “And it’s only this week, and I’ve always coached that way.”

While Edwards remains focused on UCLA Saturday, there is undoubtedly the prospect of a trip to Santa Clara, California for the Pac-12 Championship Game for ASU. 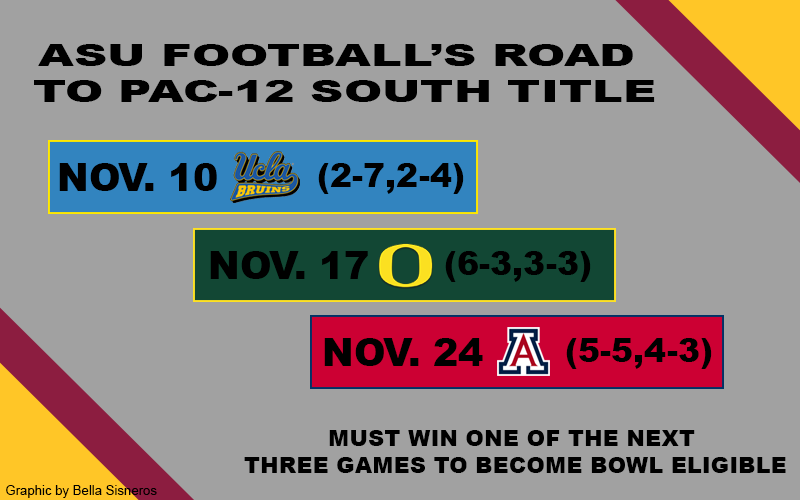 Pac-12 South champion seemed unattainable a short time ago, but the Sun Devils now have the title in sight. (Graphic by Bella Sisneros)

The path is clear for the Sun Devils: beat UCLA at home, travel to Oregon and take down the Ducks, return to Arizona and defeat the Wildcats in Tucson.

Do all of that, and the Sun Devils will claim the program’s first Pac-12 South title since 2013.

“Opportunities in life come along and when they come along you have to take advantage of them,” Edwards said Monday.

But Edwards isn’t looking beyond the most immediate opportunity. For Edwards, it is all about getting his team to a third consecutive when UCLA comes to Sun Devil Stadium Saturday.

“I think they’ve gone through when they won two early and everyone telling them they were this and that, right?” Edwards said. “Obviously, (they) didn’t handle it very well.”

ASU got off to a hot start in September, beating the University of Texas at San Antonio and upsetting Michigan State before falling to San Diego State. That loss was one of three in a four-game stretch.

However, the Sun Devils regrouped and now can win their third game in a row.
“It’s always about the next game for me,” Edwards said. “It’s never about other stuff.”

With all the new-found excitement swirling around the Sun Devils, Edwards made it clear his focus is to continue approaching the season one week at a time.