A fence along the U.S.-Mexico border splits Nogales in half – one half in Arizona, the other in Sonora. The Trump administration this week ordered 5,200 troops to the border in response to the caravan of migrants coming from Central America. (Photo by Celisse Jones/Cronkite News)

People walk near the Nogales port of entry. Mayor John Doyle said he supports the deployment of federal troops to maintain the orderly flow of goods and people across the border if ports of entry are overwhelmed by asylum-seekers from Central America. (Photo by Celisse Jones/Cronkite News)

NOGALES – The border that divides the U.S. and Mexico also symbolizes divided opinions in this border city about the deployment of hundreds of U.S. troops to handle a caravan of Central American migrants making its way north through Mexico. 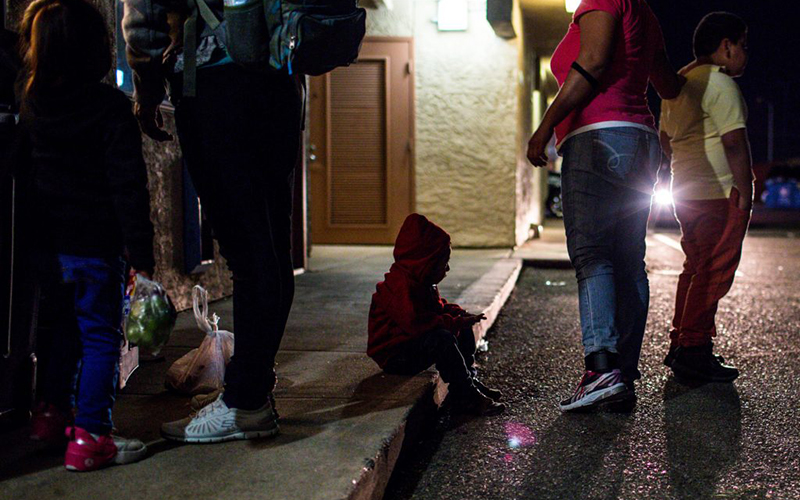 Footsteps into America: A migrant's journey of struggle, hope and the unknown

President Donald Trump is deploying more than 5,000 troops – and may increase that to as many as 15,000 – in response to a caravan of migrants traveling to the border, where many hope to ask for asylum.

Trump said the move is a response to a migrant “invasion,” while opponents described it as a rallying call to his base before next week’s crucial elections.

Trump ratcheted up the rhetoric in a White House news conference Thursday, saying the military would defend the border against migrants who he said are abusing the asylum laws to gain entry to the country.

The president released few specifics during the 20-minute speech but said the military was erecting “massive cities of tents” along the border to hold immigrants who are caught trying to cross the border, and that he has instructed the military to respond harshly to any aggression, including rock-throwing.

“Anybody throwing stones, rocks … we will consider that a firearm,” he said he told military leaders.

Earlier this week, the 20,000 residents of Nogales waited for more troops to arrive. One business owner was concerned that troops could affect legal residents’ movement across the border. The mayor was relieved at the prospect of troops offering help. And one resident’s sympathies lay with the Central American migrants, many of them from Guatemala and Honduras.

Nanette Miranda owns an art gallery in the Quality Hotel Americana Nogales, minutes away from the border. People moving across the border, back and forth between Arizona and Mexico, often stay at the hotel during their journeys. 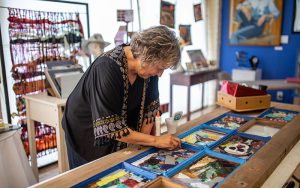 Nanette Miranda, owner of a hotel art gallery, says people are afraid, “and there’s just no reason to be.” (Photo by Celisse Jones/Cronkite News)

Vibrant pieces created by local artists sit on shelves and cover the gallery walls. On open studio night, she invites local artists, poets and musicians to come and share their craft.

But she fears that’s about to change. She said troops at the border will make the city feel like a militarized zone.

“We don’t need anymore,” she said. “We have Border Patrol that are at a checkpoint even north of the city here.

“Quite frankly with all the political talk, it really hurts. People are afraid, and there’s just no reason to be.”

Miranda also said having troops at the border impacts people routinely traveling back and forth between the U.S. and Mexico.

“Many people who live and work here have business and/or family on both sides of the border to the extent that it impedes movement across the border,” she said. “It’s just not necessary.”

Mayor John Doyle said he welcomes the troops because he is worried about the city’s ability to handle the possible influx of people with the migrant caravan. Customs and Border Protection can’t handle that by itself, he said, adding that troops will help maintain the routine of everyday life along the border. 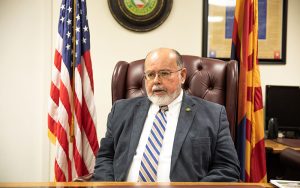 Nogales Mayor John Doyle said Tuesday evening he had not received official information about when troops might arrive or how many might come to the border. But he welcomed the help. (Photo by Celisse Jones/Cronkite News)

“Having to place that burden on just our local federal agencies like CBP, which includes Border Patrol and Customs, they would be overloaded if there was no support from extra troops being here,” he said, sitting in a leather chair flanked by the American and Arizona flags.

“That means that it would affect the people that come across the border, because it would slow down the process of them crossing the line.”

Still, Doyle said he is operating in a sort of information vacuum. On Tuesday, he said national and state military officials had not been in contact with border mayors.

He does not know if or when troops will arrive or, if they do, how many will come.

“I think it would be appropriate, and they would show some respect for the community leaders to at least let us know what’s going on,” he said.

Mayra Alejandra Reyes Gaxiola, 19, sells clothes in a Nogales shop. She sympathizes with the migrants and understands why they are making the long, slow journey.

“It’s very sad because people come from very far away so they can have an opportunity right here,” she said, surrounded by racks of clothes in a neighboring shop.

Gaxiola said she and friends sometimes buy food and share it with migrants they see waiting on the other side of the border.

“They’re really nice people,” she said. “My friends, like, I have people from right here, like, go take candy to the little children.”

Gaxiola said it’s nice to interact with people on the other side of the border.

“You see the face of the children or the people laughing or saying ‘Thank you.’ It feels very nice helping other people that need help right now,” she said.