Traffic congestion, such as on Interstate 10 in downtown Phoenix, is one of the biggest factors that contributes to idling. (Photo by Nicole Neri/Cronkite News)

FLAGSTAFF – Arizonans spend time in their cars every day. Stopped.

Maybe they’re waiting for a light to change or light rail to pass, to pick up a friend or get food at the drive-thru. Whatever the reason, all those idling engines contribute to air pollution.

It’s a national environmental concern. The U.S. Department of Energy reported that idling of personal vehicles emits about 30 million tons of carbon dioxide and wastes about 3 billion gallons of fuel annually. Tailpipe emissions are one of the largest contributors to ground ozone, which forms when nitrogen oxides and volatile organic compounds react to sunlight, according to the Environmental Protection Agency. Ozone irritates the lungs, especially in young children, the elderly and asthmatics, and prolonged exposure can permanently damage lungs.

There are no legal consequences for personal vehicle drivers who idle in their engines in Arizona. A Maricopa County regulation, which follows state code, limits idling time to 5 minutes for heavy-duty trucks.

But Flagstaff is trying to address the problem through awareness.

In September, the city launched the Turn It Off initiative, hoping to convince residents they can to save money and boost air quality. The city’s sustainability department surveyed residents to identify common vehicle idling spots. It received roughly 250 responses.

Tailpipe emissions are one of the largest contributors to ground ozone, which forms when nitrogen oxides and volatile organic compounds react to sunlight, according to the Environmental Protection Agency. (Photo by Nicole Neri/Cronkite News)

“Air pollution affects everyone, and reducing idling is a way to reduce your impact on the environment that also saves you money,” said Jenny Niemann, climate and energy specialist for Flagstaff. “It’s something that everybody who drives can do, and they can pick the way they want to turn it off.”

The campaign aims to help people identify places they can turn off their car engines to avoid unnecessary idling. Those who voluntarily take the pledge online are entered to win a $50 gift certificate toward an oil change, which further reduces fuel consumption.

Flagstaff residents take an online pledge where they choose to turn off their engines at train crossings, parking lots and drive-thrus, the most common idling locations identified in the survey. They also have the option to type in another location of their choice.

The initiative also focuses on helping people learn about the misconceptions about idling, such as the false notion that turning modern engines on and off damages the starters. Another misconception is that restarting a car engine consumes more fuel than idling. In reality, idling for more than 10 seconds uses more gas than restarting the car.

Flagstaff doesn’t have any idling bans, she said. Plans for Turn It Off involve working with businesses and continuing to work with residents to figure out how to make it easier for them to reduce idling.

There aren’t any similar steps being taken in the fourth largest county in the nation, Maricopa County. The county has been in nonattainment for ozone since 2012. It follows state idling regulations for heavy duty trucks, but there is nothing for cars, pickups and SUVs. 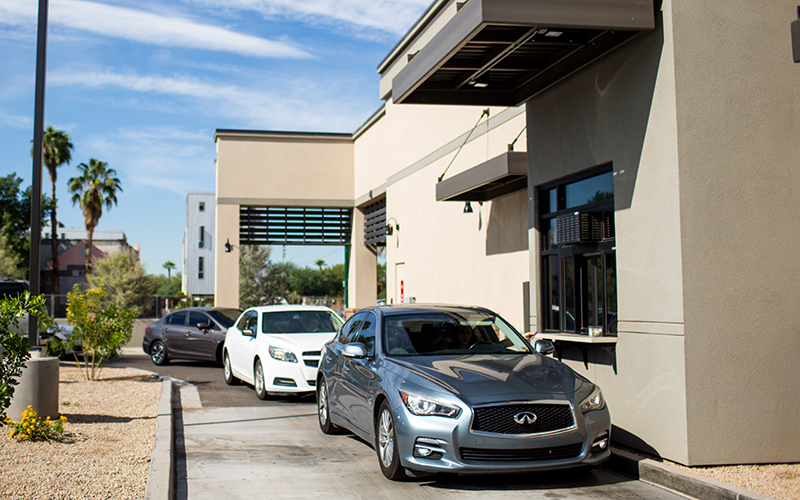 There are no legal consequences for personal vehicle drivers who idle their engines in Arizona. A Maricopa County regulation, which follows state code, limits idling time to 5 minutes for heavy-duty trucks. (Photo by Nicole Neri/Cronkite News)

The county is working with trucking companies to install a system that allows drivers to turn their engines off while still being able to power air-conditioning and access the internet. Usually, drivers leave trucks idling when they are stopped for long periods of time so that they can have air conditioning and lights.

For passenger vehicles, traffic congestion is one of the biggest factors that contributes to idling. However, today’s cars generate considerably lower air emissions than older models, said Ira Domsky, a planning consultant for the Maricopa County Air Quality Department.

“Even though we have more people here,” he said, “a lot has been done in terms of traffic flow. … The amount of emissions each vehicle creates has decreased with the newer cars, and that has been reflected in better air quality.”

Overall, the county has shown a downward trend in ozone concentrations since 2000, according to Lindy Bauer, environmental director at the Maricopa Association of Governments.

In 2012, the EPA formally designated the boundaries of the Maricopa County nonattainment area after the county failed to attain the EPA’s revised standards for ozone. The county designed an eight-hour ozone plan to reach attainment, which was submitted this year, but it still needs the EPA’s approval, Bauer said.

The plan includes 93 ozone control measures, one of them is “encouraging limitations on vehicle idling.” The county sends out notices that ask companies and the government to encourage people to limit idling when the Arizona Department of Environmental Quality announces high pollution advisories.