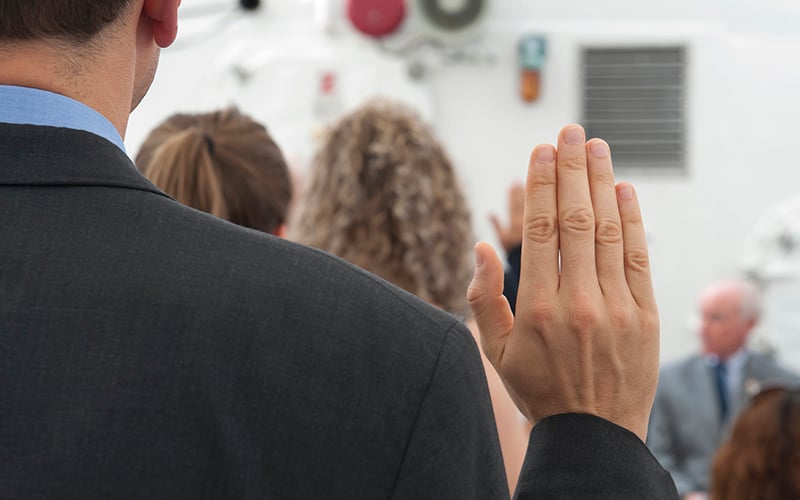 There’s no oath involved – birthright citizenship automatically confers U.S. citizen status on anyone born in this country, even if their parents were here illegally at the time. President Donald Trump wants to change that. (Photo by U.S. Coast Guard Academy)

WASHINGTON – Arizona native Francisco Fernandez holds a college degree and a job with a nonprofit in the nation’s capital – none of which, he said, would have been possible without the citizenship status conferred on him at birth.

“Had my mom had me in Mexico and then come to the United States, there’s no way I would be able to have a healthy childhood or a healthy life,” Fernandez, 23, said of his undocumented parents.

But the circumstances that gave Fernandez birthright citizenship could soon be dismantled if President Donald Trump has his way.

Trump, in an exclusive interview with Axios on HBO released Tuesday, said that White House attorneys are working on an executive order that would have the effect of getting rid of birthright citizenship, a right that most believe is enshrined in the 14th Amendment to the Constitution.

The White House did not respond to requests for comment on the proposal and Trump did not provide many details in the portion of the Axios video released Tuesday, except to say that he has been assured by advisers that he could achieve his goal with an executive order.

He called it “ridiculous” that someone can come to the U.S. and have a baby who is “essentially a citizen of the United States for 85 years with all of those benefits … it has to end.”

Rep. Raul Grijalva, D-Tucson, dismissed Trump’s suggestion that he can end birthright citizenship, calling it little more than a blatant political ploy following weeks of increasingly harsh rhetoric on immigration and the border ahead of next week’s elections. 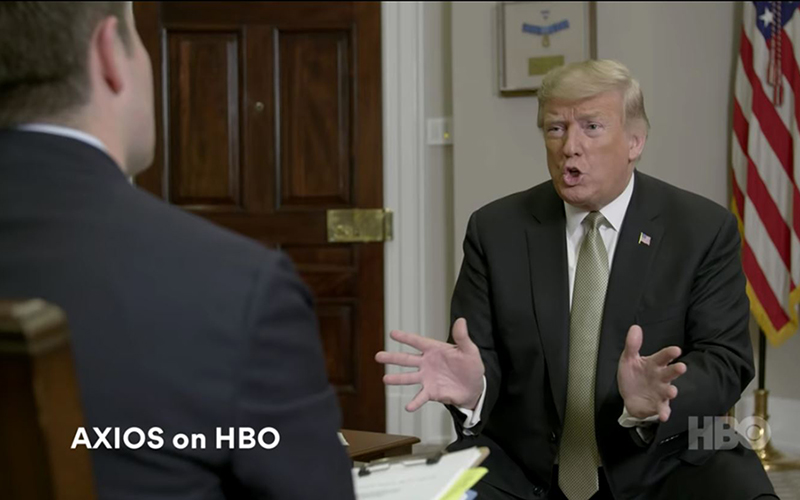 In part of an exclusive interview released by Axios on HBO, President Donald Trump said his administration believes it can skirt birthright citizenship with an executive order. (Photo courtesy Axios on HBO)

“Comments like these should be taken for what they are: Attempts by an unhinged, uninformed president to stoke the fires of anti-immigrant sentiment and influence the midterm elections,” Grijalva said in a written statement.

But supporters of Trump’s immigration policies say an executive order could clarify what they say is misapplication of an amendment that was never absolute – it excludes diplomats’ children and originally excluded Native Americans, for example – but was meant to apply to freed slaves.

“We create an absurdity – we criminalize being unlawfully present in the United States, but then we reward people who are here unlawfully by allowing their children, who are born on U.S. soil, to become citizens,” said Matt O’Brien, director of research at the Federation for American Immigration Reform, which favors reduced immigration.

O’Brien said that “making people eligible for all the benefits of the U.S. welfare state for as long as they live, by virtue of the fact that their parents chose to violate our laws, doesn’t make a whole lot of sense.”

But even if Trump were successful in doing away with birthright citizenship, it might backfire, said Sarah Pierce, a policy analyst with the Migration Policy Institute in Washington. Rather than curtailing illegal immigration, it would end up expanding the rolls of people living here illegally, she said.

“Doing this – revoking citizenship from a large class of individuals and creating this self-perpetuating class of immigrants in which their children, grandchildren, etc., don’t have citizenship – it would be damaging not only to that population, but to the U.S. as a whole,” Pierce said.

Pierce said that an executive order from Trump would likely be litigated immediately – but that may be what the president is hoping for.

“The Supreme Court has never ruled before on whether or not the 14th Amendment gives birthright citizenship to the children of unauthorized immigrants,” Pierce said. “Now, he has a Supreme Court stacked in his favor, a conservative court, so he might be pushing this out with the intention of getting it before the Supreme Court.”

Fernandez called the concept of doing away with birthright citizenship “disgusting.”

Fernandez said public benefits such as food stamps and health insurance helped his family get by, and that the financial aid for college he got through the Free Application for Federal Student Aid allowed him to afford his degree.

“I find it kind of crazy that only because I was born here, I was able to get those rights, whereas if I was a 3-year-old brought here by my parents, I would’ve been denied every single right I have that has gotten me this far,” he said.

Doing away with those benefits will not scare migrants away, he said, it will just make it harder for them to succeed once they’re here.

“People come to the United States for a better life, regardless of if they have citizenship or not,” Fernandez said. “Why would they go back to the country they came from if they’re doing a great job here, not only helping their families, but bettering this country as well?”

Fernandez said he hopes to one day move back to Arizona and work in public service – but he has more to learn on Capitol Hill first.