Salt River Project announced last year it plans to shut down the 44-year-old plant ahead of schedule because producing electricity from natural gas is so much cheaper and cleaner than from coal. (Photo courtesy Amber Brown/SRP) 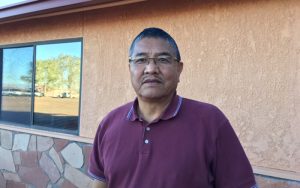 Jerry Williams has worked for the Navajo Generating Station for 38 years. He also is president of the LeChee Chapter of the Navajo Nation. (Photo by Laurel Morales/KJZZ)

Jerry Williams has worked at NGS for 38 years. Two weeks ago, he had to make a tough decision: stay with the plant, which is slated for closure late next year, or accept a reassignment in the Phoenix area.

“I thought that I’d be the last one to turn that switch off and say, ‘Hey, we’re done,’ but it didn’t turn out that way,” he said.

Williams took a job at a natural gas facility in Phoenix owned by Salt River Project, the utility that operates the Navajo Generating Station.

“I’m short of retirement,” Williams said. “I’m 58 years old. If I was going to retire next year, not being 65, we get penalized for every year that you retire early.”

Williams said his wife refuses to go to Phoenix, so he plans to drive back and forth on the weekends to LeChee.

SRP last year announced it planned to shut down the 2,250-megawatt plant ahead of schedule, because producing electricity from natural gas is so much cheaper and cleaner than from coal.

Navajo leaders are scrambling to find a new owner for the Navajo Generating Station. Officials with the Hopi Tribe have asked the federal government to buy electricity from the plant to avoid a shutdown. The Hopi Nation lies within the vast Navajo Nation, and both tribes have relied heavily on the coal industry for the past 40 years.

No other job on the Navajo Nation pays as well as NGS, which began producing electricity in 1974. The revenue, taxes and royalties from coal make up about a third of the Navajo operating budget and most of the Hopi budget. The plant supplies 90 percent of the power required to pump Colorado River water through the Central Arizona Project, which serves the Phoenix and Tucson areas.

Hopes were raised last summer when the New York investment company Avenue Capital Group and Middle River Power of Illinois considered buying the plant, but the groups dropped the idea in September. Unless something changes, the plant’s last day is scheduled for Dec. 22, 2019.

About a third of the plant’s 500 employees have taken new jobs with SRP in metro Phoenix. And more may follow.

“A few people I know, they turned their offers down,” Williams said. “A couple of them I know are close to retirement. And some of them, they have families, they have kids here in the school system and some of them have property they bought here.”

So they will settle for minimum-wage jobs or live off the land as their ancestors have done for generations.

To stay or go?

“There’s no comparison,” Sean Tee said from his new apartment in Mesa, where SRP relocated him a few months ago. “The job that NGS provided was you could live beyond your means. I was able to provide a pretty good life for my siblings.” 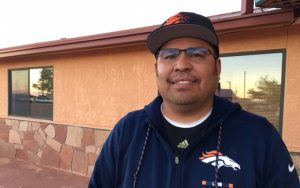 Jonathan Miller left to go to school but returned. “If you look at the economic condition of the reservation, the only thing that holds this nation together is our natural resources,” Miller said. (Photo by Laurel Morales/KJZZ)

Tee, who works at a natural gas facility, still sends money back home. He misses his family and animals in Tuba City.

“I like the rural life, where there’s a still a dirt road and there’s less noise, less traffic, less people,” he said. “I had a few roping steers, four horses. We always had sheep, but the sheep didn’t last that long because we’d eat them.”

Jonathan Miller, on the other hand, said he’s tried making the reservation home.

Elders often tell young Navajos to go ahead and leave the reservation: Go to school or learn a skill, but bring that knowledge back to your people.

Before working for the plant, Miller ran the Boys & Girls Club in LeChee.

“That was my mentality,” he said. “You come home, and you see a socially unfunctional society. It’s basically because of the breakdown of the family.”

Miller said on top of that is the tribe’s economic struggles. Half of Navajos on the reservation are unemployed. And few young people want to farm or ranch anymore.

“If you look at the economic condition of the reservation, the only thing that holds this nation together is our natural resources,” Miller said. “Other than that, we are a nation of supplement income from the U.S. government or state of Arizona. We are just a social-program nation that’s run by grant money.”

So when SRP hands Miller his relocation offer, he said he will take it and go.