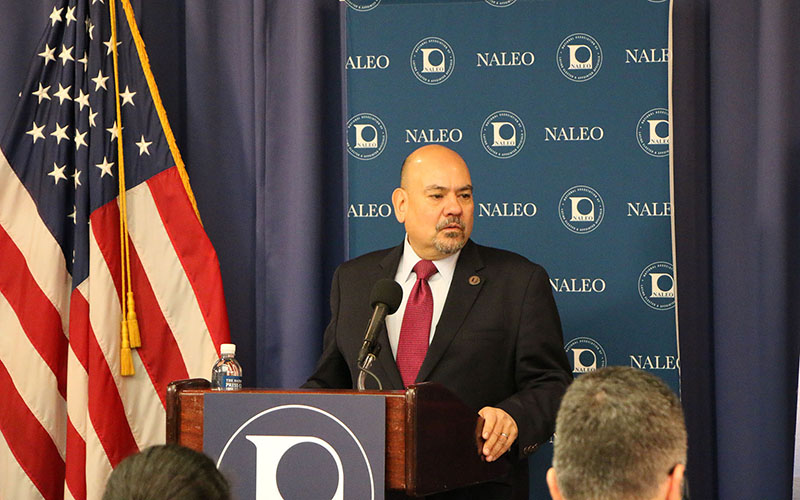 Arturo Vargas, CEO of the National Association of Latino Elected and Appointed Officials said there is “actually very high enthusiasm by Latino voters to participate in this election.” (Photo by Vandana Ravikumar/Cronkite news)

WASHINGTON – Just under a half-million Latino voters are expected to go to the polls in Arizona this fall, a 33 percent increase from the 2014 midterm elections that reflects growing numbers and hot-button issues like immigration and health care.

That projection was part of a report released Wednesday by the National Association of Latino Elected and Appointed Officials Education Fund, which predicts that as many as 7.8 million Latino voters will cast ballots, about one-quarter of those eligible to vote in this election.

That interest appears to be higher in Arizona, where the 486,000 anticipated voters account for 42 percent of eligible Latino voters in the state.

“There’s actually very high enthusiasm by Latino voters to participate in this election,” said Arturo Vargas, CEO of NALEO, at a news conference Wednesday to release the report.

Vargas and others said the numbers could be even higher, but for lingering hurdles that Latino voters face when voting and trying to register to vote, and an apparent lack of interest by campaigns and candidates despite the growing size of the group. 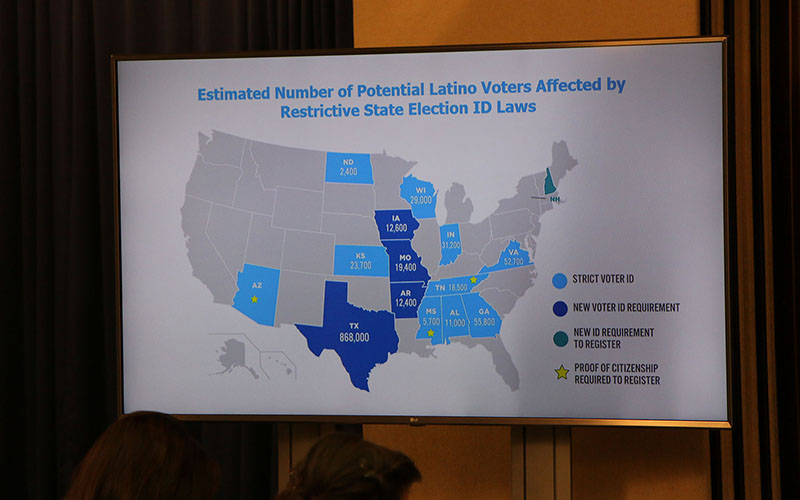 The NALEO report said Latino voter turnout should be higher this fall than it was in 2014, the last midterm election, and that it could be higher still but for what it calls hurdles to Hispanic voting and registration. (Photo by Vandana Ravikumar/Cronkite News)

That’s despite steadily growing numbers of eligible Latino voters. More than 29 million Latinos are eligible to vote nationwide this year, making up 12.8 percent of the total electorate – both record highs, according to a Pew Research Center analysis of Census Bureau data.

But Latino voters continue to face problems at the polls, according to the NALEO report. It said that 46 percent of Latino registered voters experienced at least one issue while trying to vote, be it long wait times, registration problems, location or precinct errors, voter ID problems or language assistance issues.

Still, Latinos have been energized to vote in this election because of prominent topics like immigration, education, job creation and health care costs – all of which have consistently ranked high in two months of weekly polling by NALEO and Latino Decisions.

Tomas Robles, executive director of LUCHA Arizona, said last week that candidates who will appeal to Latino voters are those who “talk about policies that actually represent the needs of the families, like a really progressive immigration platform and economic justice platform.”

Alternatively, Stephanie Maldonado of LUCHA Arizona said last week that Latinos may be motivated to go to the polls to oppose a politician or a policy. She said she saw that after the 2016 presidential election, when “we saw a lot of Latinos that normally wouldn’t vote or be engaged feel somewhat of a call to continue fighting against these bad policies.”

But the greatest obstacle in increasing the turnout of Latino voters may simply be getting them registered to vote, Vargas said Wednesday.

“Voter registration has a direct effect on Latino turnout,” Vargas said. “So we have some work to do there in terms of making sure registration becomes a fact of life for every adult U.S. citizen.”