Not only is advancement in the postseason at stake, but the club hopes to make a strong case for becoming one of Major League Soccer’s expansion franchises.

The Rising face Portland Timbers 2 at 7:30 tonight at the Phoenix Rising Soccer Complex in the United Soccer League’s 16-team single elimination tournament. The Rising ended their regular season with a 1-0 loss to the Timbers.

“Focusing pretty intently all week,” Rising defender Joe Farrell said. “The level has definitely raised. Everyone’s kind of buzzing to get into this first game and really get a chance to bite back at Portland for the last weekend.”

The game is about more than just a ticket to the conference semifinals.

The club’s MLS aspirations could be jeopardized. The Rising hope to land one of two MLS expansion spots, Nos. 27 or 28.

The club is hosting MLS executives, who will be attending the match tonight, although Rising general manager Bobby Dulle said the MLS visit is “just a visit.”

The league fields 23 teams, but has confirmed three more spots, for FC Cincinnati in 2019, and for Inter Miami CF and Nashville SC in 2020.

Detroit and Sacramento were the other two finalists in the vote to grant MLS franchises Nos. 24 and 25. They are competing directly with the Rising, among others, for an MLS spot.

It appears likely one of the two remaining spots will be going to Austin FC, the team from the Texas city where the Columbus Crew franchise had planned on landing.

The Crew could now remain in Columbus due to Cleveland Browns owners Dee and Jimmy Haslam emerging as strong candidates to buy the team and keep it in Ohio.

MLS hasn’t fully clarified whether Austin FC will take up one of two remaining MLS spots but strongly hinted at that possibility.

“Regardless of any scenario in Columbus, there is a clear path forward for (Prescourt Sports Ventures) to operate Austin FC as a Major League Soccer club,” MLS said via a statement on their website. 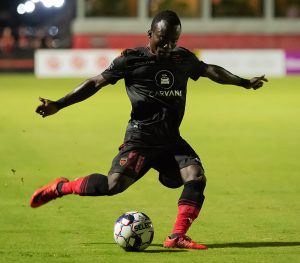 Solomon Asante of Phoenix Rising FC is among the players who hope to lead the team in the postseason. (Photo by Joe Hicks/Getty Images)

A lot has changed for the Rising in a month.

A month ago, the Rising trailed first-placed Orange County SC by four points, with two games in hand. A first-place finish was attainable.

A month ago, the Rising won seven of eight games between August and September, scoring 18 goals and allowing only four.

And even though they achieved all three records, their hot September form has cooled off along with the Arizona weather.

The last three games of the regular season saw the Rising lose twice and tie once, scoring two goals and allowing six in the process.

The Rising finished the regular season in third place of the Western Conference, three points behind first-placed Orange County SC.

Farrell said the team can’t take anything for granted, after having significantly more scoring options than Portland last week, and said scoring early is key for Timbers 2 to lose confidence.

“At this point now, we know everything we need to know about Portland. The idea here is being a little bit more focused in the final third,” Schantz said.

Schantz said the last three games served the Rising as preparation for the playoffs.

“ ‘Ifs’ don’t get you anything in this game,” he said. “All we have now is we have to win. If we take our chances and put the game away early, that’ll definitely be in our favor. … In the front third in particular, we have to be killers.”

They have the fifth-best offense in the league with 63 goals and the second best defense, with 16 shutouts allowed.

If the Rising win, they will face the winner of the Sacramento Republic-Swope Park Rangers matchup.