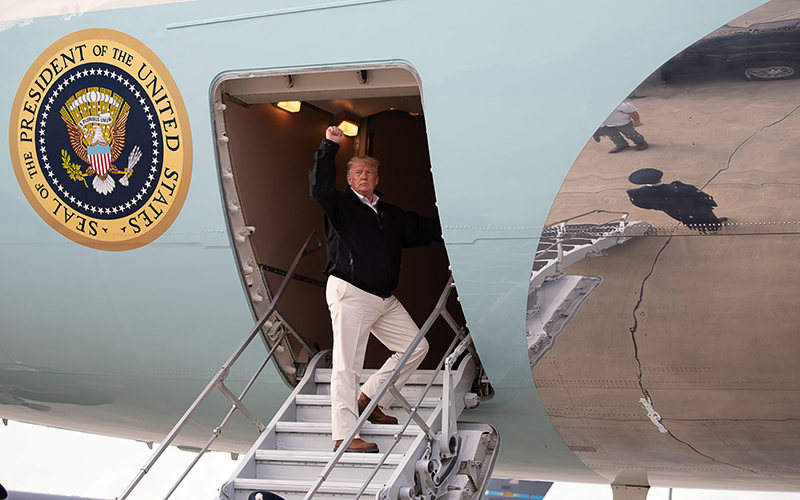 The president has to travel on Air Force One for security reasons, but when the trip is for campaigning some of the cost – about $140,000 an hour – is supposed to be reimbursed by political parties. (Photo by Shealah Craighead/White House Photo)

WASHINGTON – When President Donald Trump was still candidate Trump, he criticized President Barack Obama’s use of Air Force One on the campaign trail, demanding to know “who pays?”

Trump’s not likely to ask that question when Air Force One touches down for a Friday rally in Mesa for Arizona Republicans. But watchdog groups will.

Presidents often fly Air Force One for personal trips and campaign events as well as official business. While taxpayers pick up the tab for personal and official use, campaigns and parties are supposed to reimburse the government for political use of the plane – at an estimated cost of more than $140,000 an hour.

That did not escape Trump’s notice when Obama was on the stump.

“Taxpayers are paying a fortune for the use of Air Force One on the campaign trail by President Obama and Crooked Hillary. A total disgrace!” Trump declared in a string of tweets in July 2016. “Who pays?”

Judicial Watch has continued to track Air Force One costs under Trump, filing Freedom of Information Act requests and suing to bring some transparency to the matter. 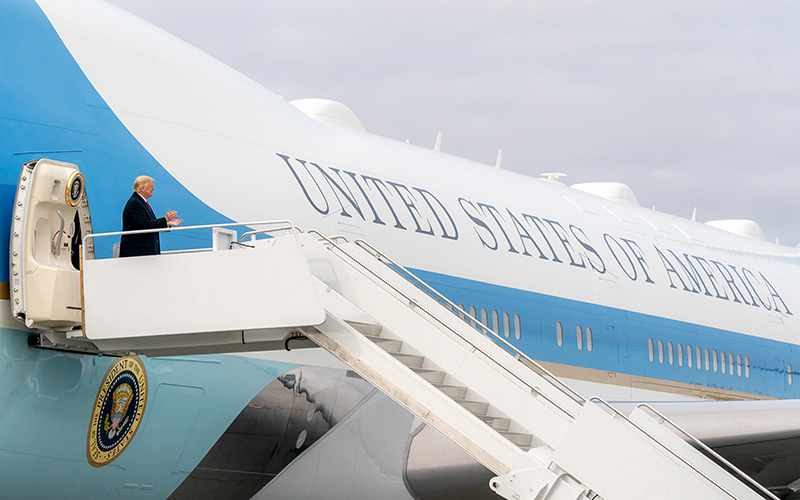 It has had some success, obtaining records showing that Trump “flew 10.6 hours at $142,380 per hour for a total of $1,509,228,” for his last trip to Arizona, on Aug. 22, 2017. That trip included an official meeting with Marines in Yuma, and a large campaign rally in Phoenix that ended with police firing tear gas into large crowds of protesters and supporters.

There is a formula to determine what share of a trip is considered official business, and the Treasury Department bills costs for that share to the appropriate campaign or political organization. But Fitton said that formula “is largely secret.”

“It costs money to move the president around; it costs too much money,” he said. “But the way to mitigate the impact on the public purse is to have the campaigns and the candidates pay much more significantly to subsidize the travel of the president.”

The trip to Arizona includes a little more than an hour at Luke Air Force Base for a tour and a discussion. But Friday’s event in Mesa is specifically listed as a “MAGA Rally,” which should make at least some of the trip reimbursable, said Virginia Canter, chief ethics counsel at Citizens for Responsibility and Ethics in Washington.

“If there’s any campaign rhetoric, any express advocacy, or use of campaign slogans like MAGA, or Make America Great Again, those are all indicators that it’s a political event,” Canter said. “When you’re only less than a month out from an election, you know, the presumption is going to be it’s a political event.”

But Brendan Fischer, director of the federal reform program at the Campaign Legal Center, said it’s not always clear-cut – particularly with a president like Trump.

“With this president in particular, there are a lot of blurred lines between official and political activity, in part because of the president’s propensity to speak from the cuff,” Fischer said. “So, what may start out as an official event can very quickly become a political event.”

He said that there is “not a lot of clarity from the White House about how they’re distinguishing between political and official.”

“As is the case with many things, the oversight really does fall to Congress, and there has been minimal oversight,” Fischer said.

Fitton does not see Trump’s use of Air Force One for political events as any worse than Obama’s, but says it has become harder to obtain the relevant information.

“The Secret Service used to be pretty diligent about giving us material and I don’t think they liked the resulting media during the Obama administration, so they just stopped responding to our requests, which led to some really significant litigation,” he said.

Fitton said that Trump has made some statements about the costs of presidential travel since taking office, but that more can be done.

“One of the reforms he can help with that is, you know, asking the parties to pay for more of their fair share of the cost of the travel and usage of Air Force One,” he said.