Tom Kiefer’s photographs of migrant belongings confiscated by U.S. Customs and Border Protection are on display at ASU’s Northlight Gallery in downtown Phoenix. The images show single items or a collection of the same objects, such as toys, wallets, keychains and cell phones. (Photo by Nicole Neri/Cronkite News).

PHOENIX — Gloria Martínez was 8 when she crossed the Rio Grande with her family from their native Guanajuato, Mexico. She still remembers the fear — a feeling many migrants carry along with their most precious belongings.

Martínez identifies with photographs of objects confiscated from migrants who unlawfully crossed the U.S.-Mexico border, part of the “Toward Reconciliation, Away” exhibition at the ASU Northlight Gallery in downtown Phoenix. Tom Kiefer took the fine-art photos for his project “El Sueño Americano” (“The American Dream”).

The intimacy and sentimental value of those personal objects motivated Martínez and other migrant artists to challenge Kiefer during his opening-night presentation at the gallery last month, shining light on a bigger national debate over who holds the right to tell the stories of underprivileged communities.

“When I first saw his work … I felt that taking the person out was objectifying and dehumanizing a person that once put a lot of energy, hope and love and security in this object,” said Martínez, 35, a DACA recipient and art student at Arizona State University. 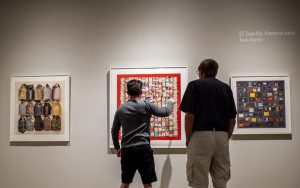 Despite the pain of seeing photos of objects that could have easily belonged to her family, Martínez said she appreciated that Kiefer’s work stimulated a discussion with family members and fellow artists.

“After hearing him talk … as an artist, I understand that art is meant to evoke emotional feelings and discussions,” she said.

Kiefer’s photographs feature vibrant backgrounds that display a single item or a collection of the same objects, such as toys, wallets, keychains and cellphones. Other items photographed by Kiefer are a private love note and a comb inscribed with a name.

Kiefer, who’s originally from Wichita, moved to Ajo in 2001 to work on his photography. To supplement his income, he took at job as a janitor at the U.S. Border and Customs Protection facility in Why a few years later. In 2007, he began recovering personal items that had been confiscated from migrants and discarded because they were deemed lethal or non-essential. In other instances, Border Patrol agents had failed to return the property before deporting their owners.

“If I didn’t retrieve these items from the trash, they just would have went to the landfill. There would’ve been no record of people coming here,” Kiefer said.

‘The life lived gets to tell the story’

Alberto Ríos, an Arizona poet laureate and ASU Regents’ professor of English, said artists who are not migrants should be clear about telling the story from an outsider’s perspective and enter the conversation that way.

Ríos, who grew up at the border in a bicultural household, said the objects left behind there define the history of those who went through the experience. 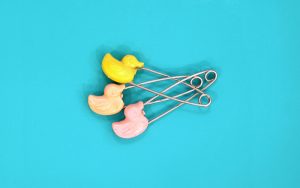 “Duck Pins,” by Tom Kiefer, shows baby pins carried by a migrant crossing the U.S.-Mexico border. Kiefer began collecting and photographing personal property he recovered from the trash while working at the U.S. Customs and Border Protection facility in Why. (Photo courtesy of Tom Kiefer)

“The life lived gets to tell the story,” Ríos said. “Those objects reach back into their history. They have come through the desert … which is in itself just extraordinary, but then to try and hide the fact of that hard, difficult suffering. This is a story that in some ways tells itself. It explodes out of the immigrant artist.”

Zarco Guerrero is a Chicano artist and activist based in Mesa whose art is centered on masks and sculptures that convey a fair understanding and appreciation of his indigenous ancestry. He wants his art to represent humankind and immediately inspire feelings of empathy for all people and a call to action.

“Without identity, without a culture, without a historical perspective, we don’t have dignity as human beings,” Guerrero said. “Art is meant to educate and enlighten people, bring meaning to their lives and give them meaning through the art.”

A conversation beyond art

Kiefer wants to bring light to the immorality of the immigration situation and foster communication that will lead to change on U.S. immigration policies.

“There are some people who think I’m exploiting this tragedy,” he said. “This is not about exploiting it. It’s about trying to bring forth conversation about just how horrible and morally wrong this is. Stripping these people of their deeply personal belongings is just not right.”

The photographer hopes that those who are moved by his work will take personal action, such as volunteering for a humanitarian aid group or church and voting to elect compassionate leaders. 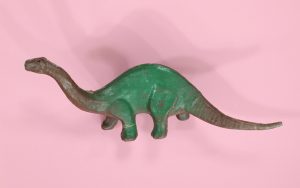 Tom Kiefer’s “Dino” was chosen as the image representing the exhibition “Toward Reconciliation, Away.” The exhibition at ASU Northlight Gallery ends Friday, Oct. 19. (Photo courtesy of Tom Kiefer)

Liz Allen, curator of “Toward Reconciliation, Away,” chose Kiefer’s piece “Dino” as the image to represent the show because of the separation of migrant children from their families at the border.

The exhibition also highlighted one of the challenges faced by migrant artists to find spaces to share their art.

At the exhibit’s opening in late September, an ASU art student who has DACA protection questioned whether Kiefer was using his platform to include migrants and allow them to talk about their experiences. The woman declined a request for an interview.

But she pointed out that Kiefer comes from a position of privilege while migrants are struggling to tell their own stories, and artists from this community have not been provided a space to present their pieces.

Allen immediately invited the student to ask ASU for more opportunities for immigrants to convey their experiences through art.

“People who don’t live in close proximity to the Mexican border of the United States are just really ill-informed about the situation,” Allen said. “I really hope that his work will get people to ask more questions and to become better informed.”

Kiefer’s work will be at ASU Northlight Gallery, 605 E. Grant St., Phoenix, through Oct. 19. It also will be shown in Florida and Michigan this month.