Arizona college students have seen tuition rise by $5,355 since the start of the recession, the biggest increase in the nation and more than twice the national average, a new report says. (Photo by JECO/Creative Commons)

WASHINGTON – Arizona universities have posted the largest tuition increases in the nation since the start of the recession, with the $5,355 increase per student more than twice the national average, according to a recent national survey.

One of the authors of the Center on Budget and Policy Priorities report said the increase was not surprising in Arizona, a state that’s “a bit notorious for how many tax cuts they’ve passed,” leading to reduced support for higher education and higher tuition costs for students.

“Arizona has stood out pretty significantly,” said the center’s Michael Mitchell. Although the rise in tuition could not all be directly attributed to cuts in state funding for higher education, he said the magnitude of the cuts made them one of the primary factors.

John Arnold, executive the Arizona Board of Regents, said in an email that the rising tuition numbers reflect the “massive, post-Recession cuts to public higher education in Arizona.” But he said the board has worked to soften the blow on students. 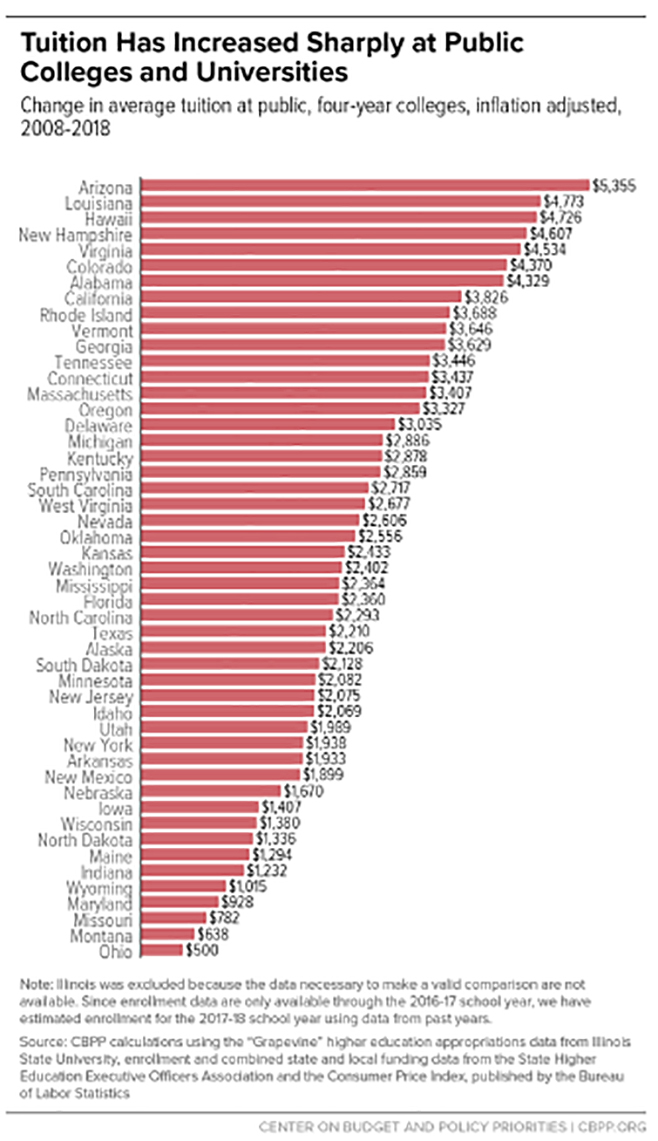 Arizona saw the biggest increase in tuition of all states since the start of the recession, a shift experts blame on falling state support for higher education. (Chart courtesy Center on Budget and Policy Priorities)

“Through aggressive financial aid, cost containment and the development of alternative revenues, the board and universities have done all they can to protect Arizona’s students and families from these reductions,” Arnold said.

Economists say the recession began in December 2007 and technically ended in June 2009.

Along with the higher tuition, the report said Arizona also saw some of the steepest cuts in state support for higher education since 2008. The 55.7 percent reduction in state support, adjusted for inflation, was highest in the nation and the $3,742-per-student cut it represents was fourth-highest.

The changes moved Arizona from having the 14th-lowest cost of college in the nation to 14th-highest. The shifts were harder on some groups than others: In 2018, college cost a typical Arizona family 19.3 percent of its income, but the number was 24.4 percent for black families in the state and 23.3 percent for Hispanic families.

Although state support for higher education has started to slowly turn around as the economy improves, the rising tuition numbers reflect what one former student leader calls misplaced priorities by the state legislature.

“This has been going on for a long time now; at first they wanted to blame the recession,” said Cesar Aguilar, executive director of the Arizona Students Association.

State Rep. Lela Alston, D-Phoenix, agreed that lawmakers in the Republican-led Legislature are largely to blame.

“You cut funding to institutions, middle- and lower-income families can’t afford it,” said Alston, a member of the House Education Committee.

Arnold said the regents hope to persuade lawmakers to continue restoring funding for higher education until state support covers 50 percent of all education costs for resident students – well below historical levels but much higher than the current 34 percent.

Alston said the consequences could be severe if something isn’t done. Arizona’s higher education model is “unsustainable,” she said, and the future economy of the state is threatened by the lack of resources the state provides for its three public universities.

“I’m concerned not just about individual’s access to higher education, but our workforce,” Alston said. “I’m glad Arizona’s being noticed, but not for this reason.”