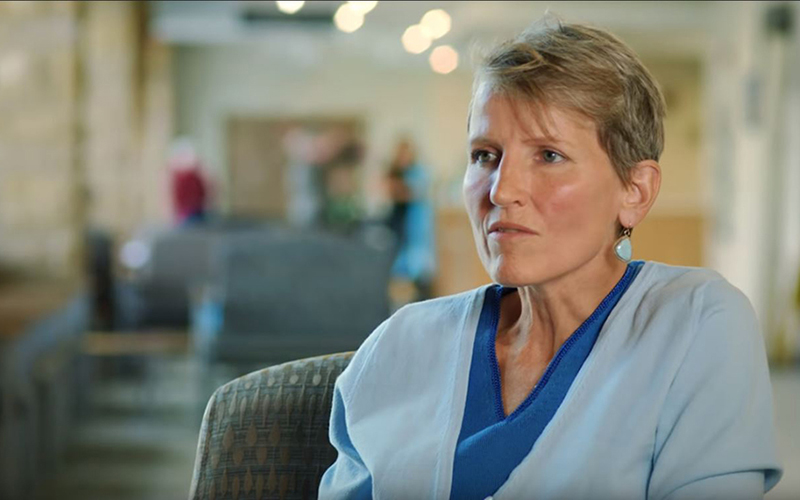 Grace Gosar, one of six siblings of Rep. Paul Gosar, R-Prescott, said she “couldn’t be quiet any longer,” which is why joined her siblings in an ad urging people to vote against her brother and for Democrat David Brill. (Photo courtesy David Brill campaign)

WASHINGTON – Democratic challenger David Brill got national attention with a viral series of campaign ads in which six members of the Gosar family slam the politics and personal values of their brother, Rep. Paul Gosar, R-Prescott.

What Brill apparently did not get was new voter support in his bid to unseat Gosar, according to a poll released last week. In fact, the hardball ads may actually have cost the Democrat some support.

The poll by OH Predictive Insights said 57 percent of likely 4th District voters indicated they plan to vote for Gosar compared to 25 percent for Brill. Most said the ads did not affect their vote, but of those who were affected, 25 percent said they were more likely to vote for Gosar and 17 percent were less likely.

“This district is very tough for Democrats, and this obviously has been a viral sensation,” Bill Scheel, partner and co-founder of political consulting firm Javelina, said of the ad campaign. But he does not necessarily see it as a game changer in the heavily Republican district.

“It creates a real problem for Gosar from an image perspective,” Scheel said. “On the other hand, his Trump base there is very big and very solid.”

A spokesman for Gosar’s campaign conceded that the ads featuring the congressman’s siblings were successful “from an earned media perspective … but from a messaging standpoint it failed miserably.”

The Brill campaign disagreed, saying the ads have brought attention to what had been a little-known campaign, whose fundraising has since skyrocketed.

“The fact that the Republicans felt they needed to do a poll right after the ad came out shows that they know … he’s vulnerable,” said Todd Landfried, the Brill campaign manager. “There are an awful lot of Republicans out here who don’t like Paul Gosar.”

Landfried downplayed the significance of the poll, whose respondents were 60 percent Republican and 61 percent age 55 or older.

But pollster Mike Noble defended it, saying it was weighted to reflect the likely turnout in November, not simply who’s registered to vote now.

The automated poll of 370 voters was taken on Sept. 25 and has a margin of error of plus or minus 5 percent. Of those polled, 98 percent said they are “very likely” to vote, while the rest were “somewhat” likely.

The race pits four-term congressman Gosar, one of the most conservative members of the House, against Brill, a medical doctor who has been head of primary care for Veterans Health Administration hospitals for 10 years, the last seven in Prescott.

Brill said he is running because his district needs a real alternative.

“He (Gosar) is so radical that he drives the Republicans and the independents away from him,” Brill said.

And family members, too, apparently. The first ads, titled “A Family Defends Its Honor,” featured the six siblings in a series of vignettes decrying their brother’s position on a range of issues where they say he has forgotten the values they grew up with and forgotten his rural constituents.

Later ads focus on different issues, such as health care and immigration reform. Grace Gosar, a longtime family physician, speaks tearfully in one about her battle with terminal cancer that she said has been checked by her husband’s insurance. In another, medical interpreter Jennifer Gosar, speaking in Spanish, calls her brother a danger to immigrants because he would “criminalize” their lives.

Landfried said the ads grew out of a conversation that began when Brill noticed a tweet by Dave Gosar and reached out to him. He said that dialogue led to the voluntary, unscripted collaboration with the Gosar siblings on the ads.

But Gosar campaign manager Tom Van Flein said in an email that the campaign has backfired on Brill.

“Our poll numbers increased and our supporters, and even people on the fence, have rallied and became highly motivated,” Van Flein said. “Our online donations skyrocketed. Twitter and Facebook users and engagement increased exponentially.

“The ad was a complete failure in terms of trying to undermine support for Congressman Gosar,” he said.

Rep. Steve Stivers, R-Ohio, chairman of the National Republican Congressional Committee, said he remains confident Gosar will hold his seat, and dismissed the siblings as partisan outsiders with a bone to pick.

“The issues they talk about are just not going to resonate in Congressman Gosar’s district,” said Stivers, calling it a “feud” with “brothers and sisters who are all registered Democrats and have not supported Congressman Gosar in the past.”

Based on voter registration alone, Stivers has reason to be confident. Republicans in the 4th District outnumbered Democrats 188,124 to 79,798, according August numbers from the Arizona Secretary of State’s Office, with 143,378 voters registered as independents.

“A paperclip with an ‘R’ next to it would win this district,” said David Wasserman, House editor for the Cook Political Report.

While the ads have brought Brill attention, Wasserman said that may have “pulled attention away from other districts that may be winnable for Democrats.” He pointed to Arizona’s 6th District, including Scottsdale and Paradise Valley, where he said Democrat Anita Malik is generating enthusiasm in her bid to unseat Rep. David Schweiker, R-Fountain Hills.

But Landfried doesn’t buy the idea that Democrats should give up on a district like the 4th, which he calls “a winnable race,” based on what he said is only a 37 percent approval rating for Gosar in the district.

The latest Federal Election Commission reports show that Gosar had raised $422,481 in this election cycle to $213,491 for Brill, but Landfried said contributions have soared recently.

“We’re bringing new resources into a district that has been largely ignored by the Democratic establishment,” Landfried said.