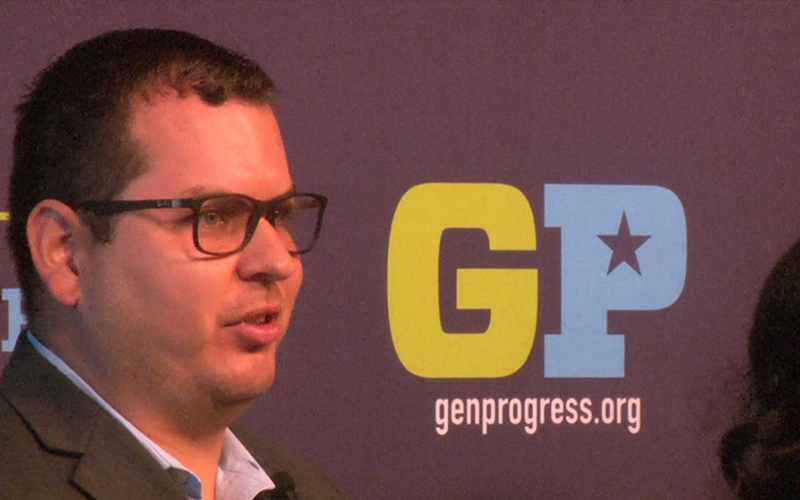 Arizona Rep. Mark Cardenas, D-Phoenix, said a shortage of young legislators like him allowed things like the Legislature making deep cuts to higher education “just because no one advocated for it.” (Photo by Lillian Donahue/Cronkite News)

WASHINGTON – Legislators across the country are far older than their constituents, and issues important to young people are taking a backseat at state and national levels as a result, according to a report released Tuesday.

The report by the Center for American Progress said that while a third of eligible voters nationally are 35 or younger, “only about one in every 16 state legislators is 35 years old or younger.”

The situation was slightly better in Arizona, according to numbers provided by the center, but still skewed sharply older, with 30 percent of the state in the 18-35 age range but only about 11 percent of the Legislature in that group. The center was only able to provide ages for 80 of the state’s 90 legislators.

“We really believe that this representation gap is reflected in the lack of real policy action on issues that disproportionately affect young people,” said Maggie Thompson, co-author of the report, “A Generation Without Representation.”

“In fact, we had a billion-dollar cut to our state universities and it was just because no one advocated for it,” said Cardenas, 31. “Now we have advocates because for four years, I was the only 20-something in the Legislature and now we have a ton of people.”

One of those people is Rep. T.J. Shope, R-Coolidge, who got together with Cardenas at the end of the last legislative session to form the Arizona Future Caucus. The bipartisan caucus of members under age 40 works to empower young leaders.

“We both came in in our mid- to late-20s, and we thought, we get along pretty well, maybe we ought to go ahead and – aside from ideology – put a group together,” Shope said in a telephone interview.

Shope, 33, said the members of the caucus represent “folks our age that have kids in school right now, that are right in the heart of Arizona’s workforce, that have to drive roads in to work every day … and get back to their families and go to Little League or Pop Warner.”

“I think more than anything it’s highlighting the actual, real-life things that are going on in families our age across the state and bringing the way families our handling those situations to light for some of our colleagues that have had a full generation in between,” he said.

But the report also said that “older means less diverse,” finding young legislators are more likely to be Hispanic, Asian or African American than their older colleagues. The lack of diversity is what drove Missouri Rep. Bruce Franks Jr. to become an activist and then to run for office.

The St. Louis Democrat, a former rapper with facial tattoos who said he has been to 174 funerals, most due to gun violence, said he was finally spurred to action by the 2014 shooting death of Michael Brown by Ferguson police. Before that he said, he didn’t believe in the power of voting, much less his ability to win an election.

“I’m glad I didn’t believe the hype,” he said at Tuesday’s panel. “Had I believed the hype, I wouldn’t have been able to pass legislation that identifies youth violence as a public health epidemic. We have the power to truly make change.”

The report does show that younger legislators are not a cure-all: Chances are “slightly better” that older legislators are women, for example, and 49 percent of young lawmakers are Democrats compared to 59 percent of young voters in the 2016 elections. It also said LGBTQ voters are underrepresented among young lawmakers and Native Americans, not at all.

Cardenas said the issues affecting his generation “are the same that affected the previous generations,” but their priorities can shift.