Protesters walked out of the Senate Homeland Security and Governmental Affairs Committee hearing on the Flores settlement, which limits how long immigrant children can be held. (Photo by Vandana Ravikumar/Cronkite News) 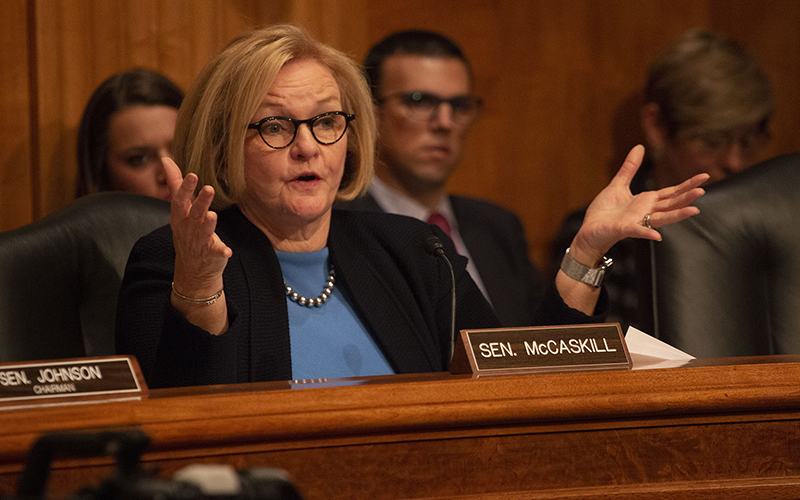 Sen. Claire McCaskill, D-Missouri, told the panel of border and Homeland Security officials that there needs to be a more effective solution to illegal immigration than family detention. (Photo by Vandana Ravikumar/Cronkite News) 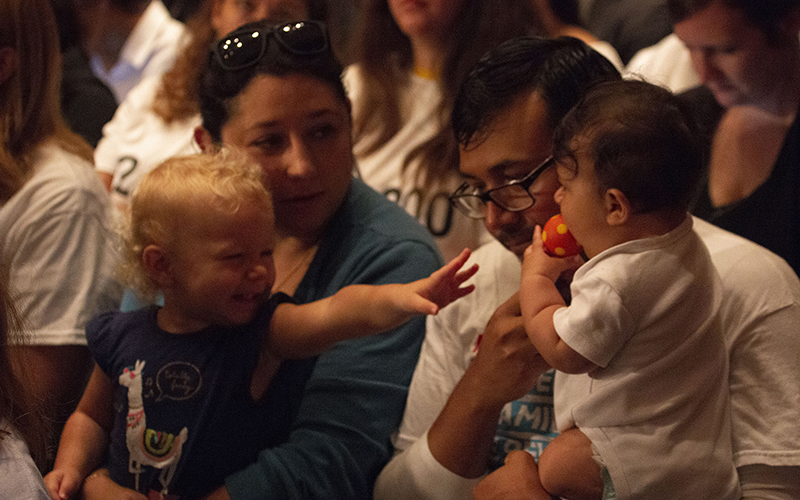 Pili Tobar, left, of America’s Voice and Jorge Silva of Latino Victory brought their children to the hearing on the Flores settlement, to make the point that the case is about children. (Photo by Vandana Ravikumar/Cronkite News) 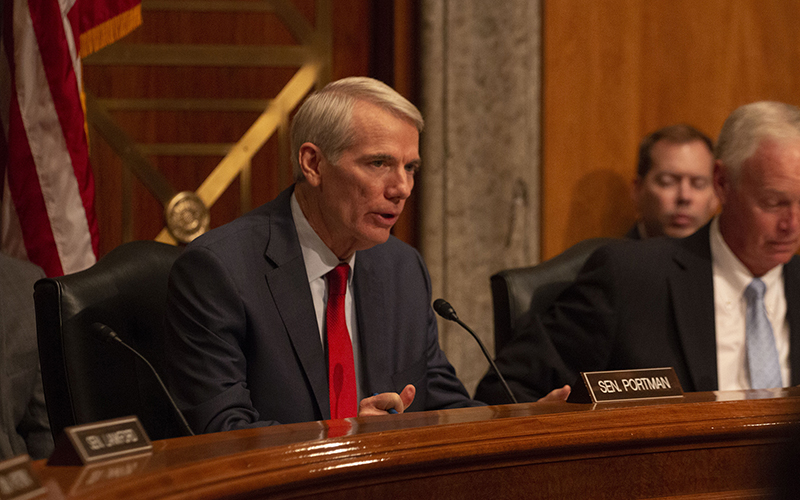 Sen. Rob Portman, R-Ohio, said that no one wants to separate families at the border – no other country does it, he said – but that border agencies must find some way to enforce the laws. (Photo by Vandana Ravikumar/Cronkite News)

WASHINGTON – Immigrant-rights advocates carrying signs and babies walked out of a Senate hearing Tuesday to protest its review of a court ruling that limits the amount of time the government can hold immigrant children in detention.

Those limits in the so-called Flores settlement were key to the Trump administration’s decision earlier this year to end its policy of separating families at the border. Protesters said they fear that modifying Flores could lead to indefinite detention for undocumented families, including children who have already sustained trauma from detention.

Jorge Silva of the advocacy group Latino Victory was one of those who brought a child to the Senate Homeland Security and Governmental Affairs Committee hearing.

The committee grilled officials from Immigration and Customs Enforcement, Customs and Border Protection, the Department of Justice and the Government Accountability Office on how Flores can be enforced while border security is protected.

Senators on both sides of the aisle agreed that family separations cause harm to children. Sen. Gary Peters, D-Michigan, said multiple medical organizations have concluded that detention causes “irreparable” harm to the mental health of immigrant children.

“Even brief stays in detention, according to these folks, can lead to psychological trauma and lasting mental health risks,” Peters said.

But Sen. Ron Johnson, R-Wisconsin, said in his opening statement that Flores has left law enforcement agencies with two options, “both of them bad: release children and detain their parents, or go back to the failed policy of ‘catch and release’ for illegal immigrant families apprehended at the border.”

Witnesses from the border agencies said that one consequence of Flores is the problem of undocumented immigrants not appearing at immigration court hearings after they are released.

“They’ll comply up until the point that the benefit of complying is no longer there,” said Matthew Albence, executive associate director of ICE. 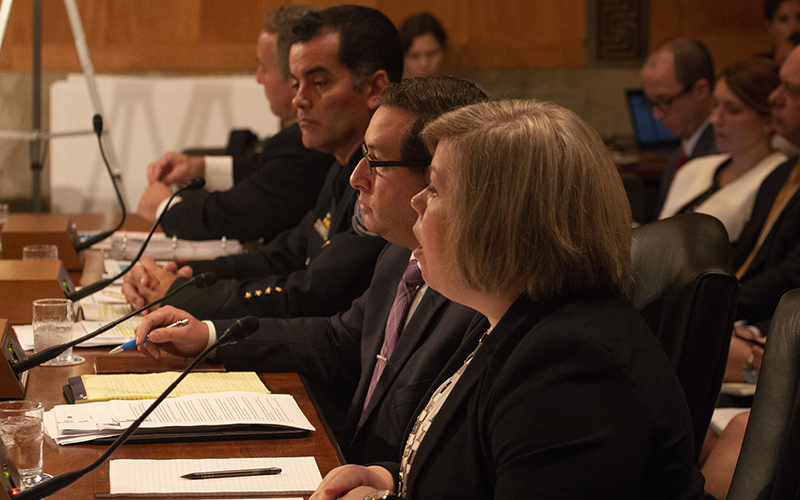 The committee heard from officials with, from left, Immigration and Customs Enforcement, Customs and Border Protection, the Justice Department and the Government Accountability Office. (Photo by Vandana Ravikumar/Cronkite News)

If Flores could be renegotiated to extend the amount of time children could be detained, they said, it could reduce the number of immigrants who “abscond” once they are no longer monitored following their hearings.

But Democrats said that more detention is not the answer.

“People are considering building family prisons – and I know how expensive that is, that’s contractors as far as the eye can see,” said Sen. Claire McCaskill, D-Missouri.

She said the government should instead fund more judges to settle immigration cases quickly and to monitor families who are proceeding through immigration courts, including those been denied asylum who are in the U.S. during a 30-day appeal period before deportation.

“If we’re going to go about building family prisons in this country as a new policy initiative, I would much prefer to do the hard work of getting the resources in place for the infrastructure of the judicial system as it applies to immigration, that could work in a timely way,” McCaskill said.

The Rev. Jennifer Butler, CEO of Faith in Public Life, said before the hearing that lawmakers should bear in mind the damage done to immigrant families in recent months before “building more camps.” That was echoed by David Inoue, executive director of the Japanese American Citizens League in Washington, who said he sees a “direct parallel” between detention of immigrants and the internment of Japanese Americans in World War II.

“The trauma these children have experienced is incalculable,” Inoue said. 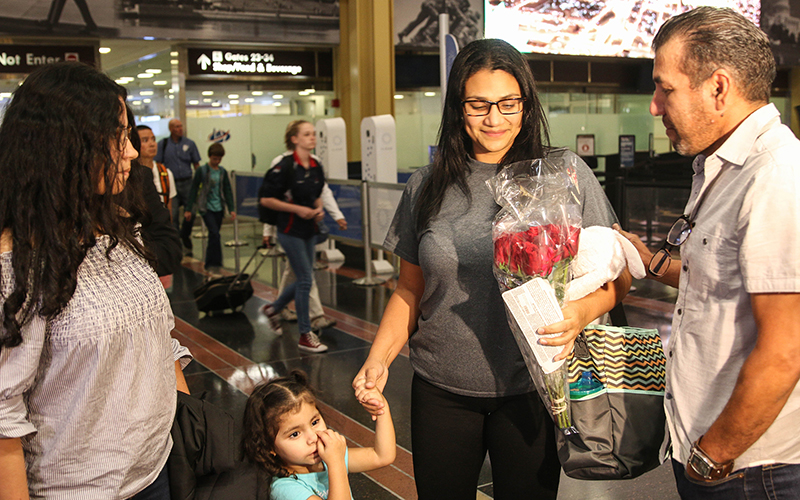 In response to questions about the impact of detention on children, Albence said he is not qualified to state “how long is too long” for a child to be held, but he asserted that ICE’s detention centers are humane and comply with standards of care.

Sen. Rob Portman, R-Ohio, asked the witnesses what it would take to process immigration cases more quickly so that Flores deadlines are not such an issue.

“That’s sort of the question all of us are asking ultimately,” Portman said. “What kind of resources are required?

“If you could, in fact, expedite these cases, it’s much more likely they can be handled properly,” he said. “And we aren’t going to lose people in the system, which is happening currently.”

Protesters at the hearing made no specific policy demands, urging only that Congress work to end family separations and detentions altogether.

Silva said after the walkout that while Isabel is too young to remember this day, he hopes her presence had some impact on the committee.

“I hope that she sees these pictures and she knows that she played a little role in stopping this,” Jorge said.