Teachers at San Tan Charter School in Gilbert are allowed to schedule their students’ second period of recess as they see fit. (Photo by Micah Bledsoe/Cronkite News)

GILBERT – A new Arizona law, pushed by advocates who say playtime burns off energy and helps younger students learn, requires public schools to expand recess from one period daily to twice a day for students in kindergarten through third grade.

Expanded recess in district and charter schools, which started this semester, will be extended to Grade 5 in the 2019-20 school year.

“District leaders should promote recess, given its many benefits for kids and classrooms, and provide more professional development to educators on classroom management, to reduce the off-trend bad practice of withholding recess,” Davis wrote in an email.

An August report by the American Academy of Pediatrics suggests play deprivation is associated with increasing rates of attention-deficit/hyperactivity disorder, or ADHD. 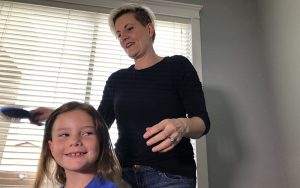 The law does not set aside a specific schedule or time limit for recess, although some schools provide at least one recess before the day starts. The recess also does not have to be outdoors. It’s mainly meant as a break in the routine, advocates say.

Kerri Jones of Chandler said an extra recess is a good thing.

Her daughter, Alexa, a second-grader at Basha Elementary in the Chandler Unified School District, said she doesn’t like it when recess is canceled because of rain or excessive heat. That means she has to be confined to the classroom to play interactive learning games.

The law does not specify when schools should hold the second recess. In Gilbert, San Tan Charter School Principal Amanda Errington said she leaves it up to her teachers to decide.

“They’re the professionals, they’re with their kids,” Errington said.

She said her school, which teaches pre-kindergarten through Grade 7, goes beyond the requirements of state law. Elementary school students have three recesses daily. Even middle-school students have a lunch recess where they head outside to the playground.

No one should make students sit for eight hours a day, Errington said.

“Kids are still kids,” she said.