SAN LUIS RIO COLORADO, Sonora, Mexico – A group of teenagers kneel in a semicircle around five men on a small soccer field in this border city 25 miles south of Yuma.

The sun has set but the sweltering heat of the Sonoran Desert remains. The dirt lots of a secondary school surround a turf field. Four light poles bracket the field, but only three of the eight lights are on.

This is what American football looks like south of the border, where the sport is beginning to thrive.

“We are one machine called the Aztecas,” Jack Guillen barks in Spanish as players grip footballs and fiddle with their flag-football belts while keeping their eyes locked on the coach.

It is a scene not that different from those playing out on football fields across the United State this time of year. And it is becoming more familiar in Mexico, especially along the border and in the country’s largest cities, as the game takes root. 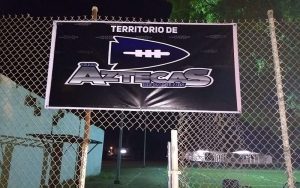 Mexico also has an extensive college football system with two major leagues and a young, six-team professional league called Liga de Fútbol Americano, or LFA. Four LFA teams are in the Mexico City area and the other two are near Monterrey, about 140 miles southwest of Laredo, Texas.

Monterrey Tech has dominated the landscape with 21 national titles, including 17 in the past 30 years. The school’s collegiate and high school teams have played against teams in the United States, with the collegiate team taking on Arizona Western College in 2011.

Early this year, the NCAA, which governs collegiate play in the United States, cleared the way for Mexican college programs to begin applying for admission to play in its Division II. Schools must meet NCAA standards for facilities and staff to be approved.

The NFL has played several regular season games at Estadio Azteca in Mexico City, including one involving the Arizona Cardinals in 2005, drawing large crowds to each.

As for youth football, Arturo Olive, director of the NFL office in Mexico, told the Associated Press the NFL sponsors 6,500 youth football programs in 27 Mexican states, including the Federal District that encompasses Mexico City. That was two years ago, and it already was a significant leap from the 120 youth teams playing in six Mexican states eight years earlier.

The Aztecas have been around for two years and feature teams at two levels in flag and tackle football. The first is the “infantil” division that features children who are in elementary or middle school. The varsity division is for high school-aged players. Girls also play, typically on flag teams.

Larger Mexican cities, such as Mexicali and Tijuana, boast several teams. San Luis Rio Colorado, which has a population of 160,000, and other small cities are in the early stages of growth. San Luis has two teams, the Aztecas and the Spartans.

Rolando Cantu, manager of international business ventures for the Arizona Cardinals, became the first Mexican-born non-kicker to reach the NFL through the Mexican collegiate system. A 300-pound guard, Cantu signed with Arizona before the 2004 season and made his league debut near the end of the next season on New Year’s Day 2006.

He said small border towns are often influenced by their proximity to the United States and thrive in football. Not so with San Luis.

“I think the youth being brought up (in San Luis) tend to gravitate toward baseball,” Cantu said. “Now that they have options in American football with the Aztecas and the Spartans in town, I think most kids drive by a football field and say, ‘Whoa, these kids have helmets, shoulder pads, dummies. It’s kind of cool. They’re hitting each other. Let me try it.’ ”

Club Aztecas coach Billy Barraza thinks youth in San Luis play football rather than other sports because of their differing athletic abilities.

“A lot of people who usually join the club join because of their physique,” Barraza said. “Why? Because they don’t like baseball. They can’t run fast. Here, we tell them they will develop themselves so that they can be competent athletes in the sport.” 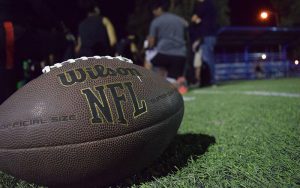 Football still has a lot of room for growth, but the sport has taken root along the border. Teams at schools and at clubs are popping up, especially in larger cities. (Photo by Josh Martinez/Cronkite News)

Football caught the attention of Anthony Gutierrez, a high school-aged athlete who had never enjoyed other sports before playing on the club.

Gutierrez is more than 6 feet tall and has the build of a football player. He said he grew up in the United States where he played some youth football before moving to Mexico.

He was surprised at how popular the sport has become south of the border.

“There are more teams in Mexico than I thought,” Gutierrez said. “Here in San Luis, there are two teams. In Mexicali, there are numerous, and there are even more than that in other cities.”

Still, there are growing pains for American football in Mexico. The Aztecas don’t have their own field. The team moves among soccer and baseball fields around the community to practice. Other Mexican cities, including Mexicali and Nogales, have fields designated for football.

Billy Barraza’s brother, club president Edgar Barraza, said another hurdle in San Luis is that parents fear their children could suffer physical harm, such as concussions, playing football. Concussions and the safety of football are a hot-button issue at all levels of the sport on both sides of the border.

In order to quash that fear, the club needs to show parents that young athletes are in capable hands. The coaches have played the sport and know how to properly teach kids how to play while caring for their well being, Edgar Barraza said.

“Little by little, the people are pushing forward,” he said. “You see other Mexican cities overcome this barrier and the sport grows. Right now, we have to continue educating the community.”

The club has been around for two years and it has gathered coaches from various walks of life who have a passion for growing the sport in their community.

Edgar Barraza played college football in the early 2000s and has coached for about 10 years. Billy Barraza also coaches the club’s offense and comes in with previous coaching and playing experience. 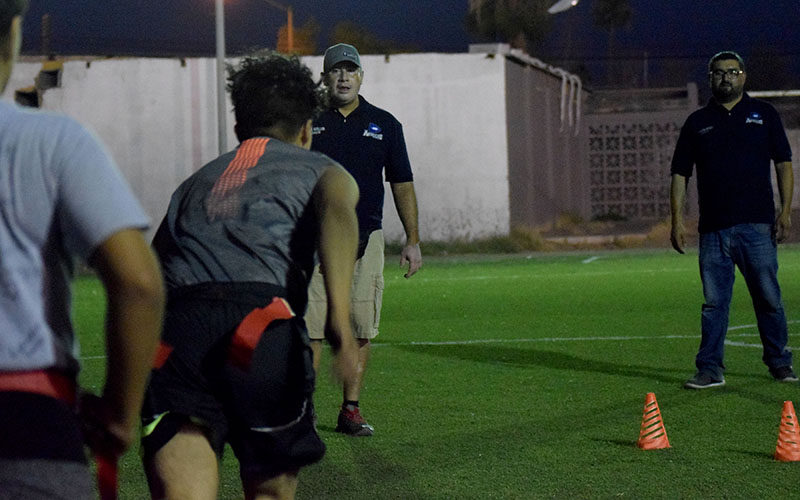 Guillen brings with him a lifelong love for the sport. His father was a football coach at a polytechnic school in Mexico City who loved the sport so much that he named his son after former Pittsburgh Steelers great Jack Lambert.

What intrigues Guillen the most, he said, is how football can help craft young men to be better people for the rest of their lives.

“It teaches discipline. It teaches youth to work as a team,” he said. “It helps form you into a competent person, a person who fights, a person who always gives the best they have.”

For two years, the Arizona Cardinals and Cantu have hosted camps in San Luis.

The relationship began when Edgar Barraza reached out via social media to Cantu to see if he had interest in hosting a camp in San Luis. Cantu said he was happy to help because he had noticed many fans from San Luis attending Cardinals games in Glendale and saw an opportunity to grow the game there.

“Why not have San Luis, Mexico?” Cantu said. “(Why not) support them with kids camps and sometimes giving them jerseys, practice jerseys or t-shirts or something so they can really grasp and continue to play this sport?”

“(Cantu) inspires the boys,” Edgar Barraza said. “He encourages them to keep training, to keep developing themselves. They can see what is attainable.” 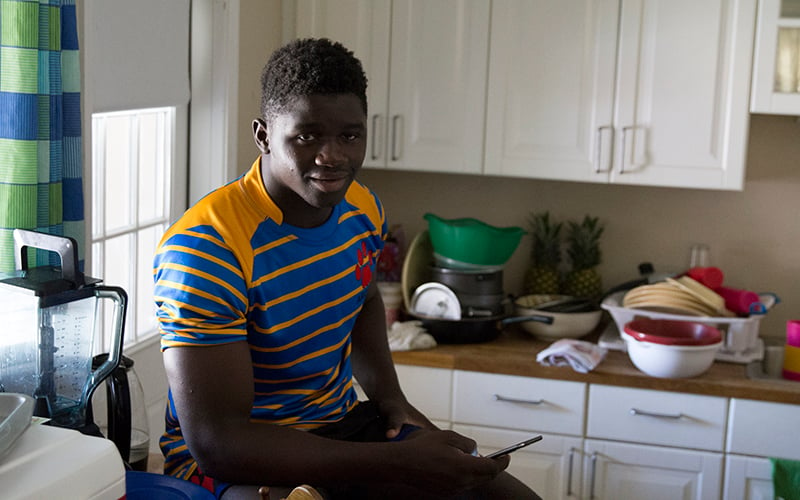 Young Mexican athletes have goals that range from playing college football in Mexico to making the country’s national team or suiting up as Cantu did for an NFL team, according to Edgar Barraza.

“A lot of young players say, ‘I want to prepare, I want to learn the sport so I can get a scholarship with either CETYS or another university in the country that they would like,’ ” he said.

As for the NFL, he knows it is a long shot for young players in Mexico at this point. But not impossible, as Cantu has showed. The Los Angeles Times reported in 2017 that only 1 percent of NFL players are Latino, let alone Mexican. And Cantu placed the exact number of Mexican-born players — including kickers — just shy of 20 all time.

Victor Leyva was another Mexican-born athlete who played at Arizona State as an offensive lineman and appeared in 10 games for the Cincinnati Bengals. Most Mexican-born players, however, break into the league as kickers.

A language barrier can be an obstacle, Cantu said.

“In order for you to come up and tryout for an NFL team, you must know and dominate English,” he said. “If you don’t, nobody’s going to stop and translate for you. I think that’s the biggest miscommunication these players have. They believe they can do it in Mexico, and they somehow come up, and it’s a totally different world.”

Despite the challenges, Cantu said there is talent in Mexico beyond kickers. The trick, he said, is to keep these players motivated. 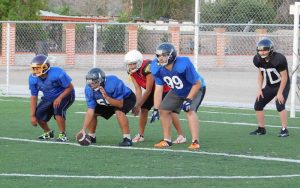 Furthermore, FiveThirtyEight estimated in 2014 that the number of NFL fans in the Mexico City area – with a population of more than 20 million people – was higher than 20 NFL markets, including Phoenix.

San Luis Rio Colorado is just starting to develop as a football market, but Cantu said that’s what makes it fun for him when he plays host camps as the Cardinals build excitement about the sport.

The Barraza brothers and others are taking steps to ensure that the growth continues. Edgar Barraza recently received his certification as a referee and is encouraging other coaches to become certified game officials.

There also are plans to add more levels within the club as participation increases.

“We want the sport to stay in the city and to be here until the end of time,” he said.

But the coaches and organizers aren’t working only toward winning games. They hope learning the game will help their players become better, more well-rounded people.

Guillen said he learned lessons from playing football that have been a part of his life for as long as he can remember. They are the lessons that led him to coaching and drive his passion for it still.

“This sport can give them that, and above all, good friends.”