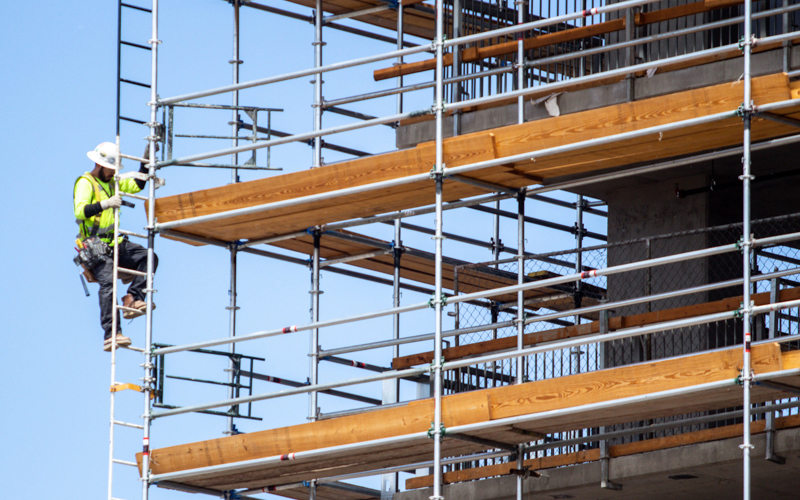 A construction worker on a new apartment project in downtown Phoenix. A new report says construction firms are having an increasingly difficult time finding workers of all types. (Photo by Nicole Neri/Cronkite News)

WASHINGTON – Construction workers have something to celebrate this Labor Day. Construction companies and their clients? Not so much.

A report last week by the Associated General Contractors of America showed that 80 percent of construction firms nationwide reported having trouble filling skilled craft positions this year – 82 percent of firms in Arizona said they have had trouble.

That drives up costs for construction firms, expenses and time for their clients. It also makes it a good time to be a skilled construction worker, as companies report they are being forced to raise salaries and benefits to get the workers they need.

“Everyone is talking about the lack of skilled labor,” said James Busch, who runs a program at Central Arizona College to help alleviate the skilled labor gap. “I could graduate twice as many welders as I do now and I still would not meet the local need.”

Busch said that every student who goes through his program, run in partnership with Sundt Construction Co. in Tempe, “has job opportunities waiting for them either upon or before graduation.” Most of those jobs offer salaries upwards of $50,000, he said.

“For a lot of these students, it’s a life-changing career option,” said Busch, chairman of the college’s skilled trade technology division.

Bill Carney of Granite Construction in Tucson said the labor shortage is changing how his firm does business.

“We’re having issues finding qualified help,” Carney said. “We have to hire third-party people to come in, which is potentially an expense.”

That cost gets passed on to clients, according to the AGC survey, which said 41 percent of firms reported having to increase bid prices and to extend estimated project completion times because they don’t have as many people to do the jobs.

The shortage is not limited to skilled trades. The report said that 56 percent of firms nationally were having trouble filling salaried positions – architects, engineers, estimators and the like. For Arizona, 85 percent of construction companies said they were having difficulties finding salaried workers.

And there is little optimism in the industry that the labor shortage will be alleviated anytime soon: 81 percent of firms nationally said they believe finding workers will continue to be difficult or will get more difficult.

The outlook among Arizona firms was just as gloomy. When it comes to skilled workers, 86 percent of firms in the state predict the situation will continue to be tough or get tougher, and more than three-quarters were just as pessimistic when it comes to hiring salaried workers in the coming 12 months.

Carney said one of reason he believes it has become difficult to find labor is that people aren’t interested in construction and have been encouraged to find employment elsewhere.

“It’s one of those areas that’s not exactly a glamorous job,” Carney said. “With the big push we’ve had in the last 20 or 30 years that everyone needs to go to college to make a good living, we feel that could potentially hinder people looking at some of these trades.”

In addition to programs like Busch’s, most of the firms that responded to the AGC survey reported having to increase the base pay offered to appear more attractive to laborers. Some have even offered additional incentives and benefits, as well as increasing their portion of employee benefits contribution.

Busch hopes that his program can help.

“We’re not going to fix the skilled gap problem, but we’re definitely contributing to shortening that gap,” he said.

But construction isn’t the only industry having trouble filling vacancies. With a rapidly growing economy, industries across the board are having trouble hiring.

At the U.S. Chamber of Commerce’s annual Labor Day briefing, Senior Vice President of Economic Policy J.D. Foster had a blunt message for employers: “Get used to it.”