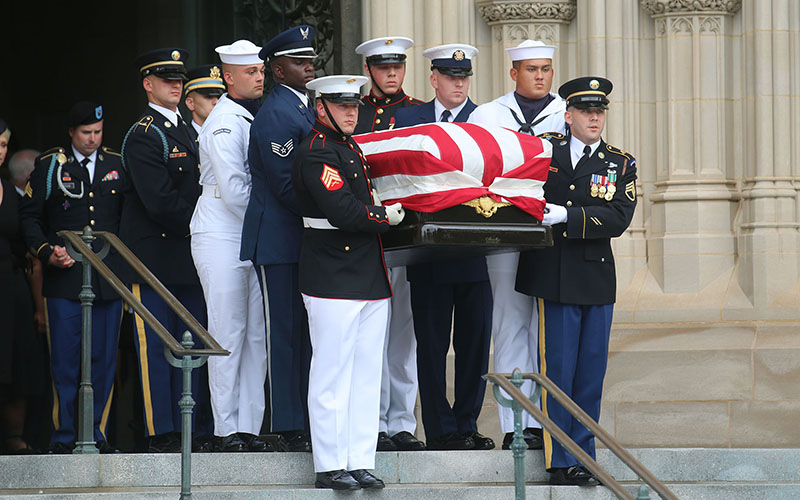 Sen. John McCain’s body is carried from Washington National Cathedral, where he was eulogized by former presidents George W. Bush and Barack Obama, among others. (Photo by Alexis Egeland/Cronkite News) 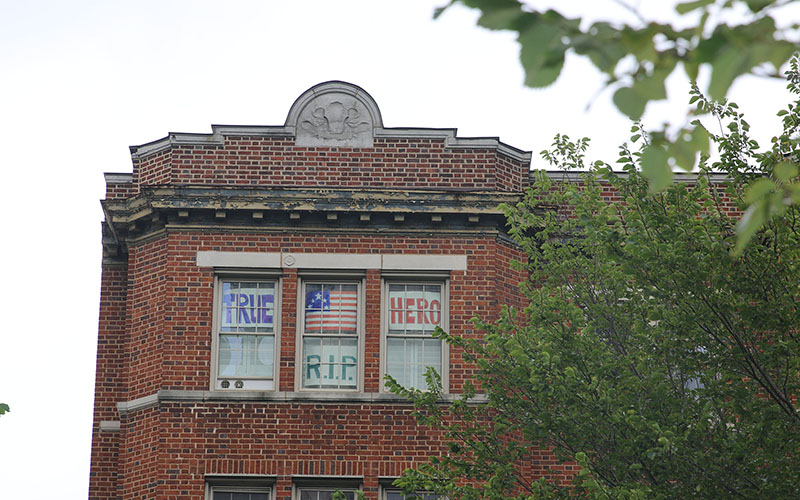 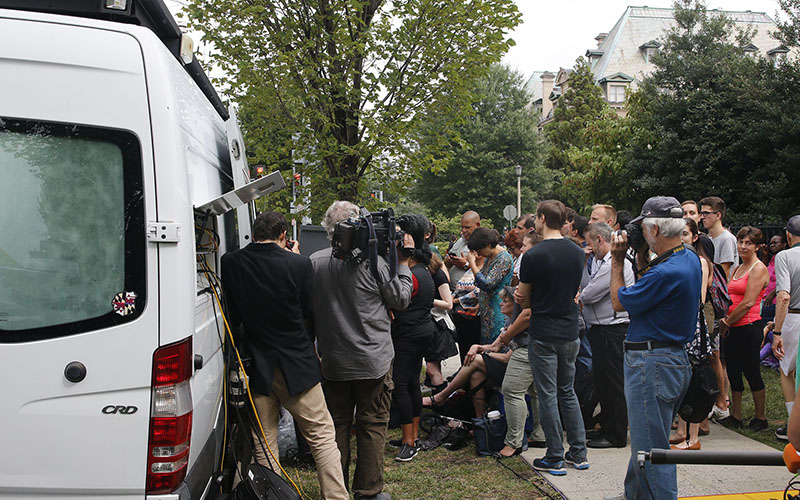 People crowd around a news van outside Washington National Cathedral in hopes of seeing video of services inside the cathedral for Arizona Sen. John McCain. (Photo by Alexis Egeland/Cronkite News) 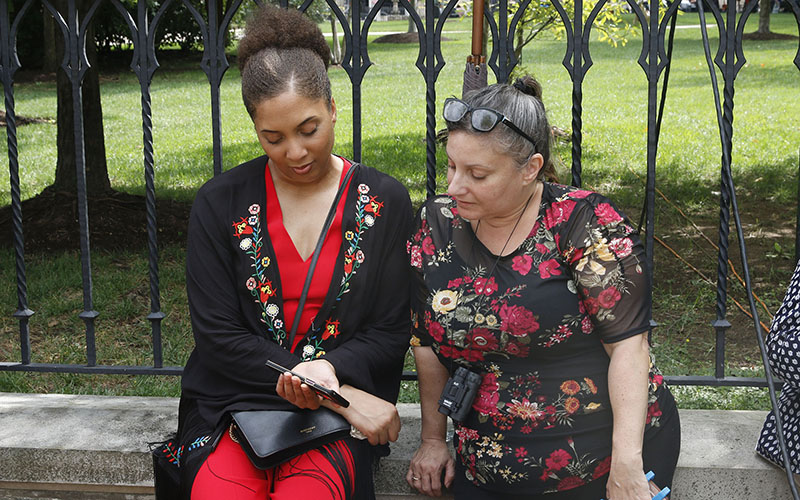 Tammi Summers, left, watches the service on a phone with her friend Robyn Stein. Summers was stationed in Afghanistan when McCain visited on Christmas 2014. (Photo by Alexis Egeland/Cronkite News) 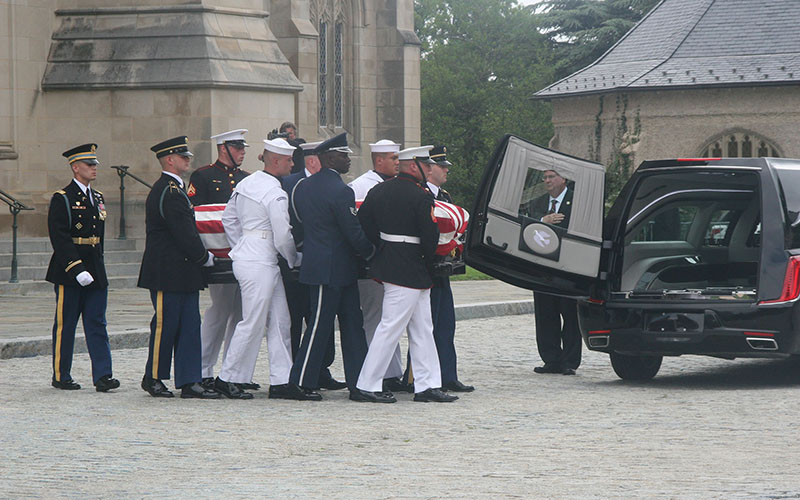 A military unit carries Sen. John McCain’s casket to a hearse after services in Washington National Cathedral. McCain will be buried at the U.S. Naval Academy cemetery. (Photo by Vandana Ravikumar/Cronkite News) 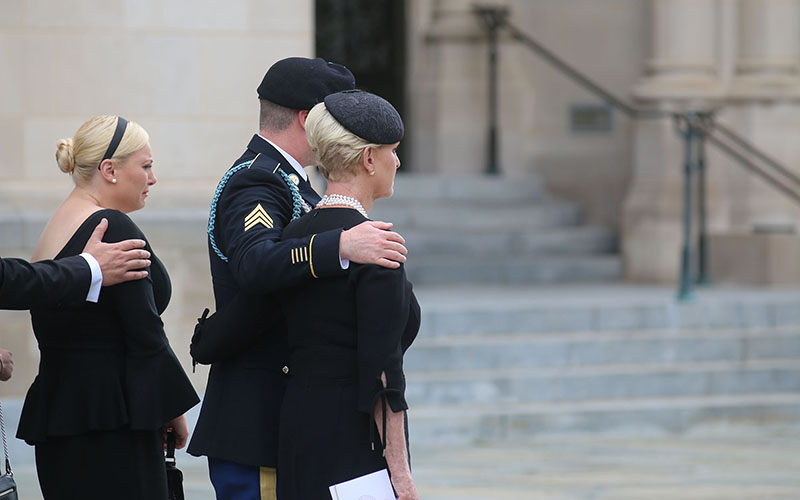 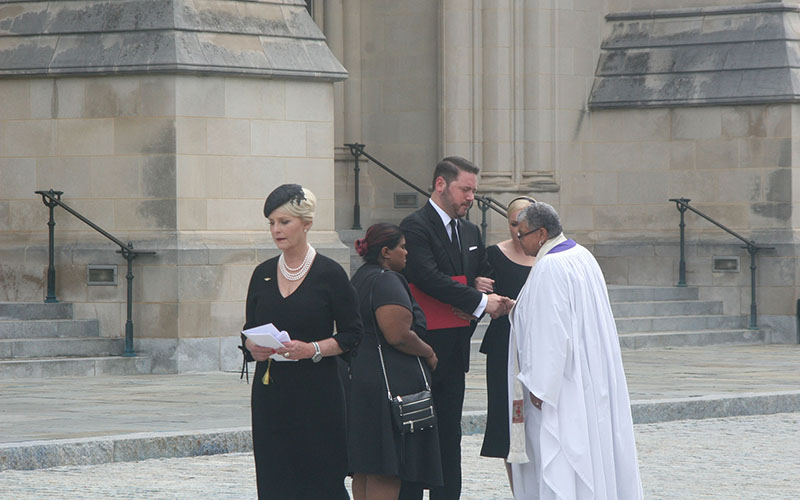 Cindy McCain has a quiet moment outside Washington National Cathedral where services for her husband, the late Arizona Sen. John McCain, were held. (Photo by Vandana Ravikumar/Cronkite News)

WASHINGTON – There were more laughs than tears for Arizona Sen. John McCain at the Washington National Cathedral, where his funeral service Saturday drew scores of political power players of the last four decades – but not the current president.

The sentimental, sometimes somber – and at one point political – two-hour service was not just a memorial for McCain, it seemed, but for a time when politicians of opposing views knew they “were on the same team” as former President Barack Obama said in his remarks.

Obama was one of three former presidents in attendance, along with George W. Bush and Bill Clinton, as the 3,200-seat cathedral was filled with members of Congress, former secretaries of state, foreign dignitaries and other members of Washington’s elite.

President Donald Trump’s daughter Ivanka and her husband, Jared Kushner, were there but the president himself, who often sparred with McCain, was not. But the president did not escape thinly veiled shots from McCain’s daughter, Meghan.

“The America of John McCain has no need to be made great again because America was always great,” she said, drawing the first big applause of the service.

It was the most overtly political comment in a day of speeches and remembrances that touched on many of the familiar public aspects of McCain’s life: His temper, his straight-talking manner, his captivity in the Hanoi Hilton and subsequent role in normalizing relations with Vietnam more than two decades later.

But it was the personal stories that appeared to have the most impact – or draw the most laughs. Bush recalled getting ready for the final presidential debate of the 2004 campaign, which was held in Tempe.

“I was trying to gather some thoughts in the holding room, I felt a presence, opened my eyes and 6 inches from my face was McCain who yelled, ‘Relax! Relax!'” Bush said to laughter from the audience.

Meghan McCain, who paused to wait for tears to pass at some points of her eulogy, told how her father made her get back on a horse that had thrown her earlier in the day, nearly breaking her collarbone.

“Nothing is going to break you,” she said her dad told her, with a smile on his face.

Former Sen. Joe Lieberman, a one-time Democrat whom McCain seriously considered as his running mate for his 2008 presidential bid, said that whenever he and McCain would visit a country that was not truly free, they would make a point of meeting local human rights activists upon arrival there.

“He loved freedom with the passion of a man who knew its absence,” Bush said.

McCain’s acknowledgement of his own flaws was another theme of the morning.

“John was the first to tell us that he was not perfect,” Obama said.

To Troy Mack, an Army veteran who waited in line four hours Friday to pay his respects as McCain lay in state at the Capitol, it was the senator’s ability to admit his faults that were his strength.

“No matter how harmed, no matter how many times he stumbled or fell, John McCain continued to walk toward honor,” Mack said. “And that is a rare thing indeed.”

Mack was speaking outside the Capitol where he waited early Saturday to tearfully salute the hearse carrying McCain’s casket to the funeral at the cathedral, an invitation-only event.

That left dozens of mourners lining the sidewalks outside, trying to get a glimpse of the proceedings.

When one network news van opened its side door, a couple dozen people crammed together to watch the services as they streamed on a monitor in the truck. Others sat along a nearby wall to watch livestreams on their phones.

Army veteran Tammi Summers said she knew she would not be able to physically attend the memorial, she wanted to be nearby as she watched the service. She recalled McCain visiting her unit in Afghanistan for Christmas in 2014.

“I got to see him in an intimate setting,” Summers said of McCain. “I just wanted to repay that forward and say, ‘Thank you for your service and your sacrifice for this country.'” 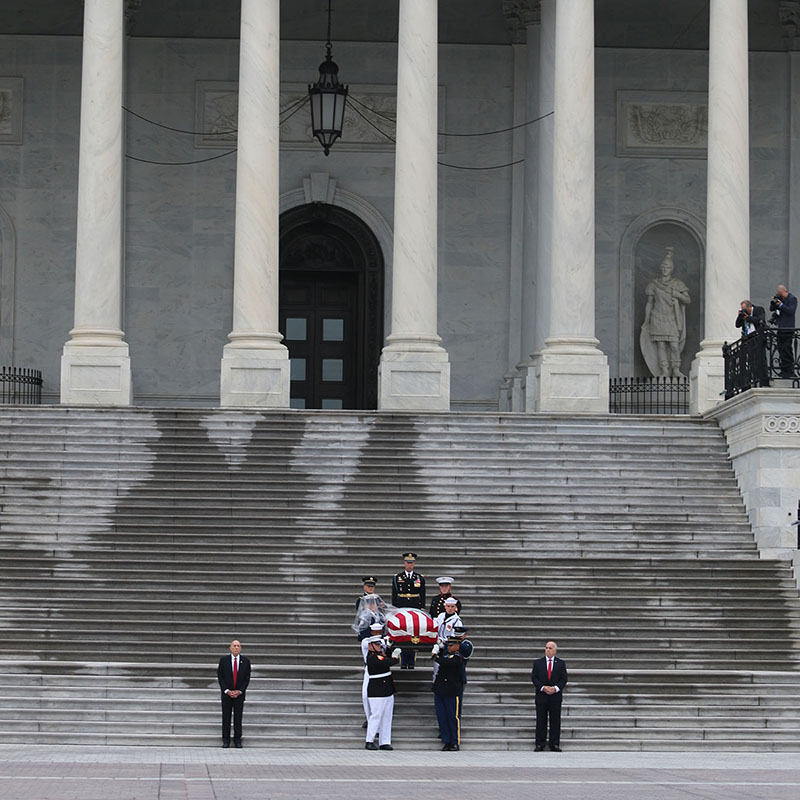 A military unit carries Sen. John McCain’s casket out of the Capitol, where his body lay in state on Friday. He is scheduled to be buried Sunday in the U.S. Naval Academy cemetery. (Photo by Alexis Egeland/Cronkite News)

Like Mack, Summers and her friend Robyn Stein, who were watching the ceremony on their phones, agreed that what they admired most about McCain was his ability to admit when he was wrong.

“Intelligent people and strong people are never afraid to admit that they made a mistake,” Stein said. “They want to learn from it.”

It was another of McCain’s abilities – to disagree without being disagreeable – that attracted Joyce DeFlumer to the late senator. A self-described “raging liberal” from New York, DeFlumer felt she had to make the trip to Washington to honor him this weekend.

“I wanted to be counted,” she said outside the cathedral, after spending Friday waiting to see McCain lie in state.

“I wanted to go out and affirm something that we need so badly in this country,” she said. “He (McCain) focused on bettering the country, on both sides of the aisle, doing his best to maintain America’s basic democratic principles.”

McCain’s repeated calls in the last year of his life for a return to civility and bipartisanship in politics was another recurring theme at Saturday’s services.

Obama recalled the time in their 2008 presidential campaign when McCain gently took the microphone from a supporter who said Obama was not trustworthy because he was “an Arab.” McCain disagreed, calling Obama a good family man with whom he happened to disagree.

“He saw himself as defending America’s character, not just mine,” Obama said of the moment.

Rep. Ruben Gallego, D-Phoenix, said that episode, and the funeral itself, served a message.

“More than anything else, I think it was designed to be a lesson to many of us elected officials about how to be good Americans and really how to serve in a civil manner,” he said outside the cathedral.