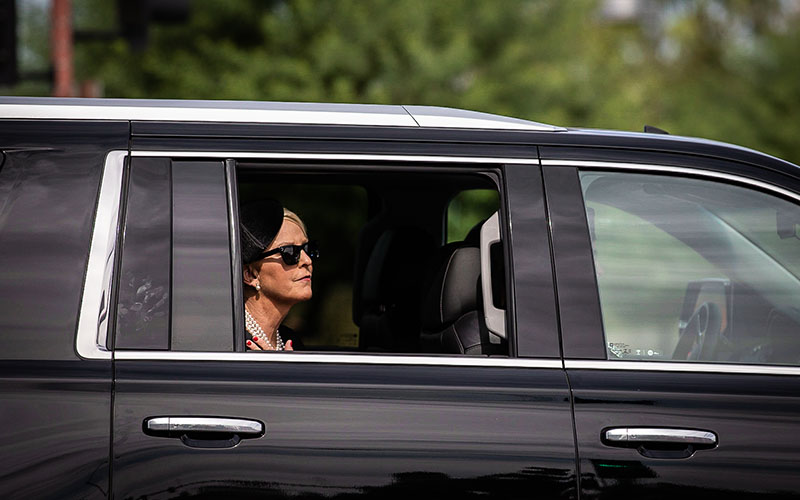 Pallbearers carry the casket holding John McCain into the hearse at the state Capitol. (Photo by Celisse Jones/Cronkite News)

Cindy McCain holds her hand over her heart as her late husband’s casket is placed in the hearse. (Photo by Celisse Jones/Cronkite News) 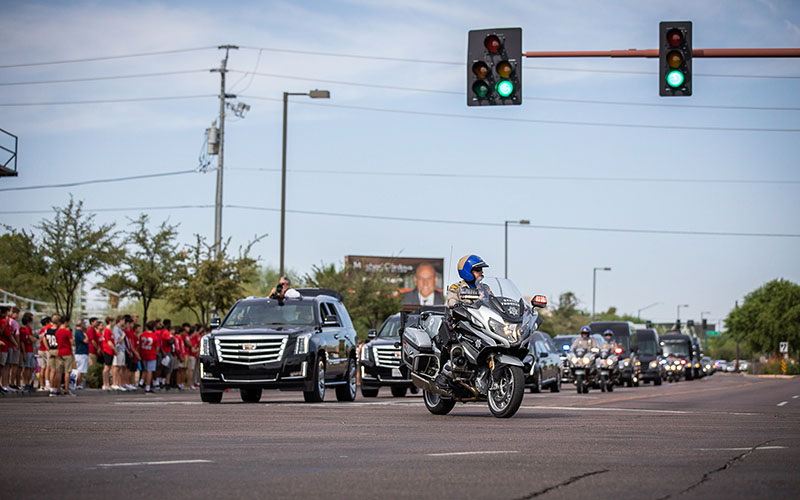 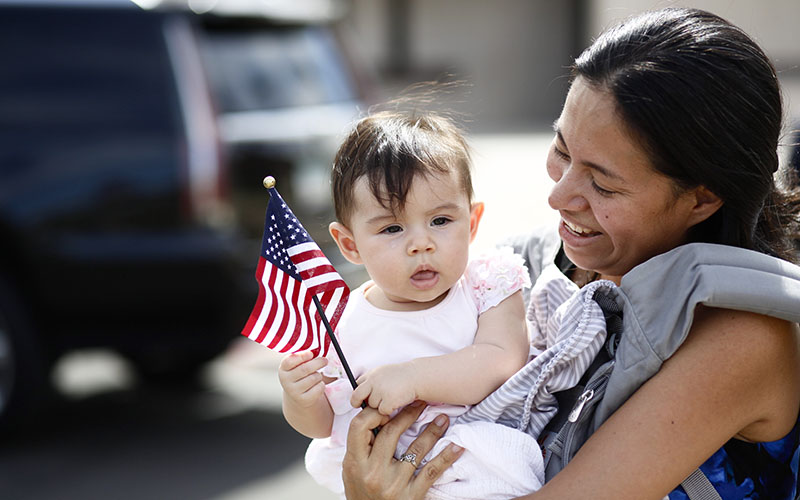 Samantha Wolfe and her daughter, Joelle, 4 months, stand outside the North Phoenix Baptist Church. Wolfe said they followed the motorcade from the Capitol to the church Thursday morning. (Photo by Anya Magnuson/Cronkite News)

PHOENIX – Thousands of well-wishers Thursday lined the route of the motorcade carrying John McCain to memorial services at North Phoenix Baptist Church. After the service, the senator’s flag-draped casket was flown to Washington, D.C., for services later this week.

The show of appreciation came a day after 15,000 people, according to McCain family estimates, filed past his casket at the state Capitol.

At the service, close friends spoke about the man they universally said represented American values and refused to compromise for political gain.

“It wasn’t politics with John, it was the underlying values,” former Vice President Joe Biden said. “He could not stand the abuse of power wherever he saw it, in whatever form, in whatever country.” 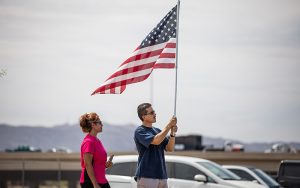 Roberto Ongaro holds the American flag next to wife, Jeannette, as the motorcade approaches Phoenix Sky Harbor International Airport. Ongaro, who served 24 years in the military, said he felt a connection to the senator “and felt compelled to honor him today.” (Photo by Celisse Jones/Cronkite News)

Afterward, McCain’s body was driven to Phoenix Sky Harbor International Airport, where he left Arizona for the last time.

With Terminal 3 – renamed the John S. McCain III Terminal by the Phoenix City Council – in the background, McCain’s body was placed aboard a military aircraft while his family looked on.

Veterans who did not get tickets for McCain’s memorial stood outside North Phoenix Baptist Church during the service.

William Cook worked on McCain’s 2008 presidential campaign, which he lost to Barack Obama.

“John was so gracious in defeat,” he said. “Instead of being bitter he vowed to work with the new president to make his country great.”

“Coming out of the service, McCain could have taken a civilian job, but he took the risk of being a fighter pilot and nearly lost his life,” Cook said.

“He is more than an American hero, he is an icon and a legend,” Hayes added.

McCain entered the Naval Academy in 1954, just before U.S. military involvement in Vietnam began. He graduated – fifth from the bottom of his class – after three years of flight school and volunteered for combat duty in Southeast Asia.

On one of his bombing missions, a missile hit McCain’s A-4E Skyhawk jet, and he landed on enemy territory in Hanoi.

North Vietnamese troops captured McCain, and he became a prisoner of war. After nearly six years, McCain was released when the Paris Peace Accords were signed to mark the end of the Vietnam War.

He received a Silver Star for “extreme mental and physical cruelties” and the Purple Heart, among others awards, for his bravery in Vietnam. 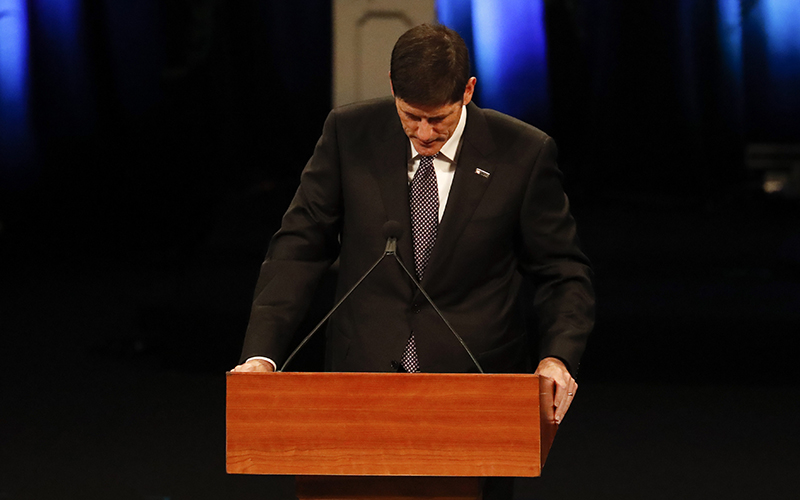 About 1,000 members of the public mingled with dignitaries and elected officials inside North Phoenix Baptist Church, but all fell silent as a pianist onstage began playing at 9:30 a.m., half an hour before the service was set to begin.

Players and staff from the Arizona Cardinals, Diamondbacks and Coyotes bowed their heads in memory of the senator, an avid sports fan and supporter of the state’s teams.

“We wanted to teach the students reverence and solemnity and the impact that a community can have on a family’s life,” said Patrick Higgins, Brophy dean of students.

“They’ve impacted our community, and we hope we can give a little back to them today by our presence here,” Higgins said.

Rubach was on McCain’s very first campaign team when he ran in 1982 for Arizona’s 1st congressional district.

McCain, even while ill, set projects in place for a future without him

Before the service, Arizona State University President Michael Crow called McCain an exceptional leader who left a legacy of getting things done.

He said memorials are an opportunity to reflect on ways people and leaders can follow in McCain’s example of service and connecting people with different ideologies to a common purpose.

“We’re pledging that we will move forward in that way instead of some of the other ways that are increasingly common,” Crow said. “Argument, argument, argument – that doesn’t really solve anything.”

Shortly after McCain was diagnosed with glioblastoma, an aggressive brain cancer, he met with Crow to discuss ideas and projects that would happen after his death, Crow said.

“He was laying down the groundwork for projects and work and initiatives and making things happen,” he said.

“I think the legacy will be that Arizona is a place that new thinkers come from, where new ideas come from for solving a problem,” Crow said. “I think he will become that legacy leader of making things happen in positive and constructive ways.”

Motorcade leaves for the airport

After the service, the motorcade departed for Sky Harbor, where McCain was flown to Washington. His body will lie in state Friday at the U.S. Capitol. He will be buried in the Naval Academy Cemetery in Annapolis, Maryland. 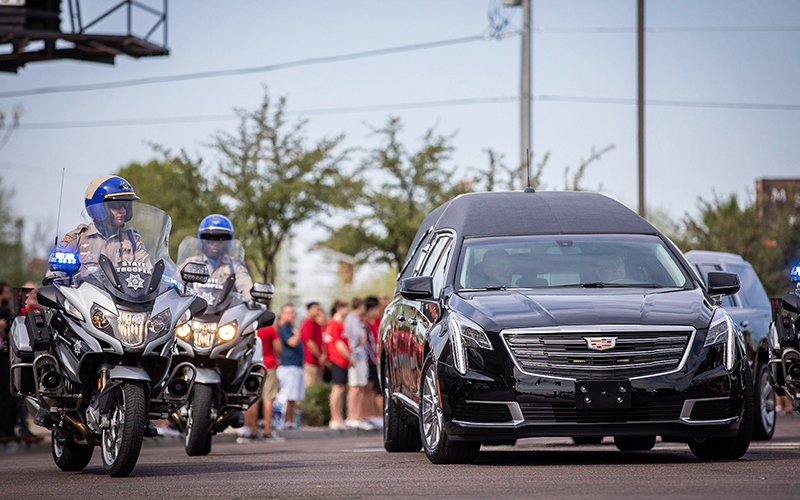 One thousand seats were made available to the public. 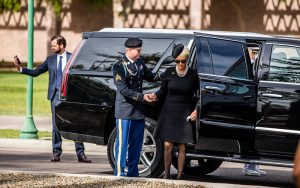 The family was greeted at the church by senior Pastor Noe Garcia.

About 9:55 a.m., the Armed Forces Body Bearer Team carried McCain’s casket into the church, followed by ceremonial pallbearers and the family.