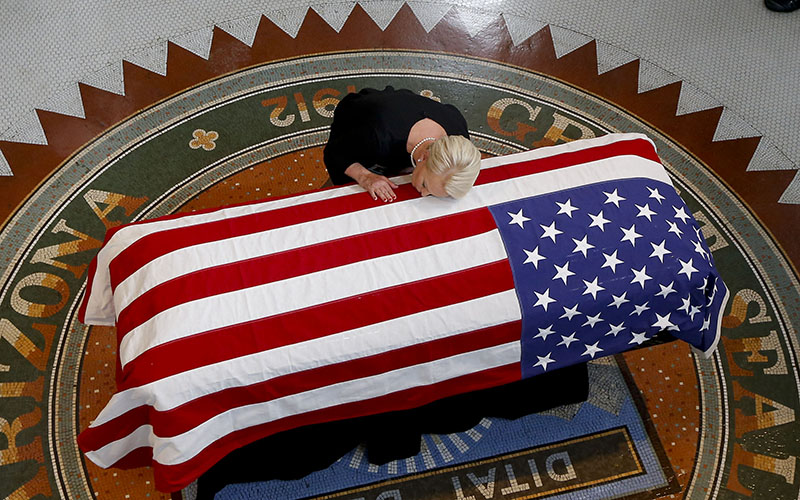 PHOENIX – On Wednesday, Arizonans said their last goodbyes to Sen. John McCain, who died Saturday after a battle with brain cancer. Thousands streamed into the state Capitol rotunda to view McCain’s flag-draped casket.

Here are some of their stories.

People line up outside the Arizona Capitol building to pay their respects to Sen. John McCain, who died Saturday after a yearlong battle with cancer. (Photo by Nicole Neri/Cronkite News)

These Westview High School seniors (from left: Zaquerian Coleman, Anthony Zambrano, Jaden Moss, Patrice Garner and Eric Hernandez) were excused from class to pay their respects. They recently learned about Sen. John McCain in class and were impressed by him. (Photo by Anya Magnuson/Cronkite News)

Patriot Guard Riders say the Pledge of Allegiance before taking positions outside the Arizona Capitol. The nonprofit group was not part of the official motorcade from the funeral home where Sen. John McCain's body was prepared, but the family asked them to stand guard. (Photo by Nicole Neri/Cronkite News)

McCain asked the school’s administrators on to meet Goodie, who was a security guard at the time, to thank him for his efforts to make Martin Luther King Jr. day a holiday in Mesa.

Even though they didn’t agree politically, Goodie said that McCain appreciated his work. They later talked about football and campus security.

Goodie said he was honored to be at the memorial service and pray for McCain.

“We hope that he is a model for all the youngsters that are coming up to see the type of person he is,” Goodie said. “This is the first time in history for a lot of (young people) to see this kind of homage being paid to anybody.” 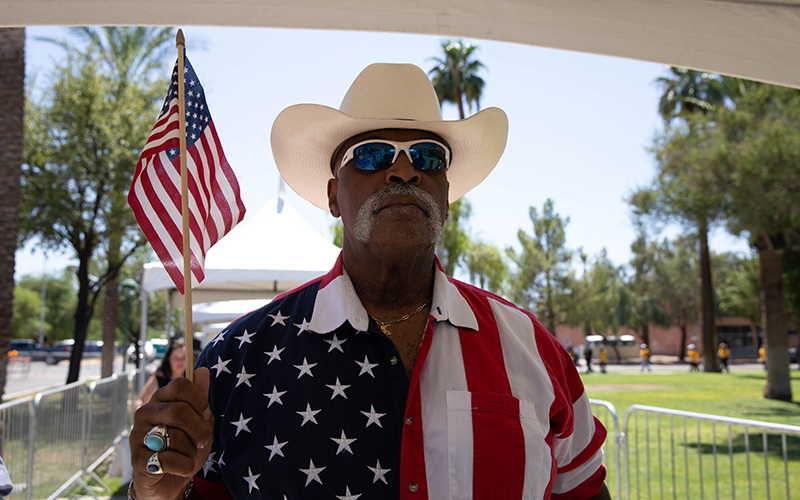 John Goodie, 66, is a football coach at Mesa High School. He met Sen. John McCain several years ago when McCain thanked him for the social justice work he had done. (Photo by Carly Henry/Cronkite News)

Crowd lines up under triple-digit temperatures

An estimated 1,500 people waited in line, which stretched from the Capitol to the intersection of 16th Avenue and Jefferson Street by 2 p.m. Mourners endured a sun-drenched sky, with high temperatures expected to top out at 105 degrees.

At least one person was treated for heat distress; a woman who collapsed was carried into the Arizona Senate. A Department of Public Safety trooper at the scene said she would be OK, describing her as a “heat casualty.”

While the line inched forward, a large screen at 17th Avenue and Jefferson showed a livestream of the casket as Arizona residents streamed past.

Cmdr. Andrew Williamson has served in the Coast Guard for 23 years, in the Gulf of Mexico and the Pacific Northwest. His career might never have occurred if not for McCain, he said.

“I got a nomination for the Naval Academy from him,” Williamson said. “My senior year of high school, I had dinner with him and his wife with my mother and sister at Luke Air Force Base. I talked to him and Cindy (McCain) for a while. Just two great individuals.”

The encounter had a great impact on Williamson.

“Just one of the best days of my life, actually, just because of his legacy and what he’s done in the past, POW, MIA, the things he’s been through, and his perseverance is a model for everybody.”

Earl McElroy said he will always remember the integrity of McCain’s response to a woman at a town hall in 2008 who called McCain’s presidential opponent, Barack Obama, an Arab.

“He could have ignored it like Ted Cruz and the rest of them,” McElroy said, “but he said Obama was a decent man.”

He wants other politicians to show that sense of honor.

“I wish other elected officials would, too, but they’re just so afraid,” McElroy said. 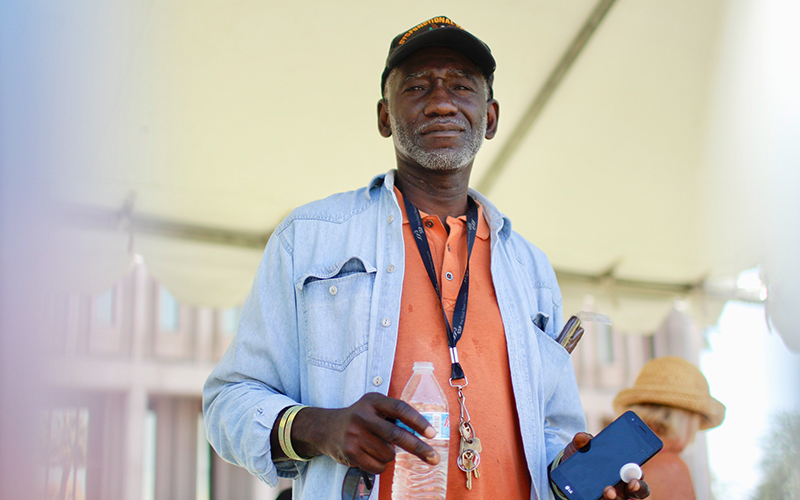 Earl McElroy wishes other politicians would show as much integrity as John McCain did. (Photo by Nicole Neri/Cronkite News)

Missing work to pay her respects

Chasity Pullin, who was born and raised in Phoenix, took time off from work to honor the six-term senator and former presidential candidate.

“Going from being a POW and then becoming our state’s senator, it really shows that anything is possible,” she said.

Pullin said she admired how McCain always tried to run a clean campaign.

“He showed that when electing our officials, it should be about the person,” she said. “He didn’t talk bad about others and try to get voters to buy into negativity.”

Pullin hopes others will follow his example by not only speaking up about what they believe in, but also acting to support these beliefs.

“We need to do something to actually show we care.” 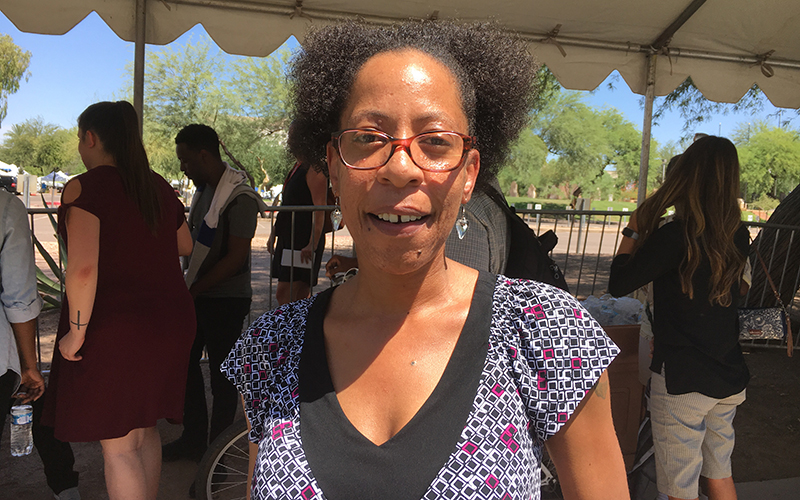 “Going from being a POW and then becoming our state’s senator, it really shows that anything is possible,” Chasity Pullin of Phoenix said. (Photo by Stephanie Morse/Cronkite News)

McCain gets street lights turned on for New York transplant

Joe Meo, 66, of Mesa, remembers an experience he and his wife, Kathy, had with McCain while waiting for a shuttle to the Arizona State Fairgrounds.

Reaching across the aisle

“I watched John McCain my whole life,” Moore said. “I remember watching the Vietnam War unfold on TV and then watching his whole political career.”

Moore, who considers McCain her hero, said she admired how McCain always tried to do the right thing, even when that meant going against the Republican Party.

“He reached across the aisle and spoke up for what he believed in,” she said. “He has an intuitive way of knowing what was right.”

“Politicians should look at what he did,” Moore said. “He didn’t side with what he didn’t believe in.”

She wrote a letter she hopes to place near his casket.

“I have my truth, you have your truth, but John McCain spoke the truth,” Moore said.

Linda Gordon of Phoenix was the first person in line to pay her respects. The senator, she said, “was worth it.”

Some people lined up as early as 7 a.m.; the doors to the rotunda opened earlier than scheduled, at 1 p.m.

Arizona Sen. Jeff Flake, a friend and Republican colleague of McCain, said today is a day of mourning for the entire state but also a day of celebration for a life well-lived.

Patriot Guard Riders conducted a flag salute Monday morning at the Capitol while waiting for McCain’s motorcade. The salute included a prayer and playing the national anthem before the group lined 17th Avenue with flags.

“It’s about honor and respect,” Robi Campbell said. “It’s for us to be able to show that a whole nation cares that someone has signed on the dotted line to protect our freedoms and the way of life we know today.”

The salute was not a part of the official motorcade, which brought McCain’s body from the funeral home to the Capitol. The nonprofit group was there at the request of McCain’s family.

“We’re here for anyone that has served our nation,” Campbell said.

Veterans groups were a large presence among the mourners.

“I’m here to pay tribute to a great man,” said Chuck Byers, chief service officer for Vietnam Veterans in Phoenix. “This is a great loss to Arizona and to the country.”

Byers knew McCain personally and worked closely with him on veterans issues.

“He had a great sense of humor and would give people nicknames,” Byers recalled. “Most people don’t know that about him. He was really genuine.”

Others veterans said they also felt a close connection to the six-term Republican senator.

“It’s a great honor to stand by our brother,” said David Yriguyen, captain of the Color Guard for the Ira Hayes Detachment. “He really stood by veterans.”