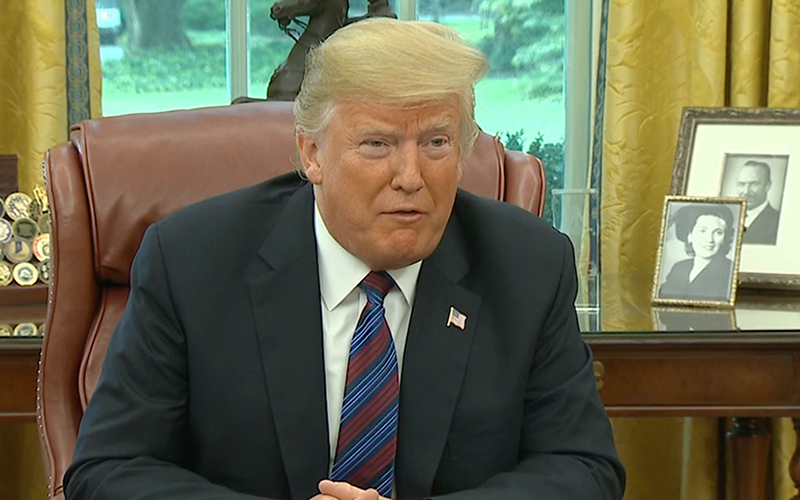 President Donald Trump, announcing the deal with Mexico to replace the 24-year-old North American Free Trade Agreement, said it is “very special for our manufacturers and for our farmers from both countries.” (Photo courtesy CNN Newsource) 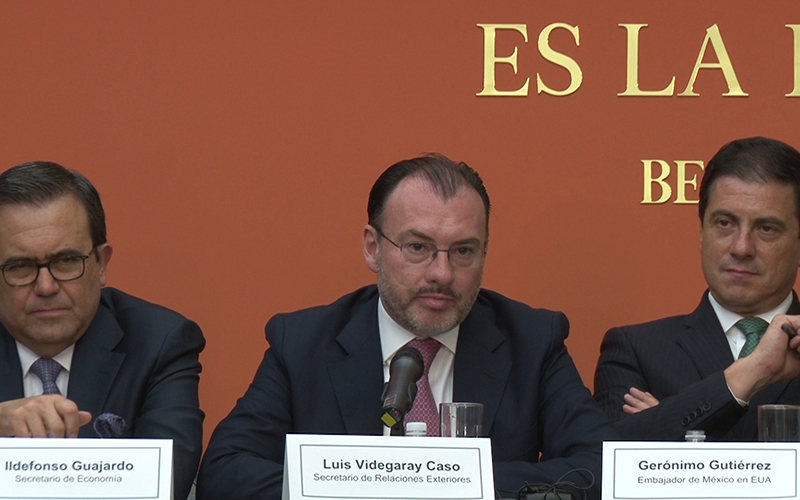 Mexican Foreign Minister Luis Videgaray Caso, center, at a news conference at the Mexican Embassy in D.C., said the U.S. and Mexico have a bilateral deal to replace NAFTA, but they Canada will join as well. (Photo by Charlene Santiago/Cronkite News)

WASHINGTON – Few details were released, but one Arizona business leader said the mere fact that the U.S. and Mexico unveiled a trade agreement Monday should “calm concerns” over the future of NAFTA.

But missing from the latest agreement is Canada, the third partner in the original NAFTA. Trump and Peña Nieto, who joined Monday’s news conference by phone, said they hope the Canadians will rejoin discussions this week.

Trump said the new deal will implement revised policies on agriculture, intellectual property protections and labor standards, among others. The only other detail released Monday was that the new deal would be good for 16 years and reviewed every six years.

Still, Arizona Chamber of Commerce President and CEO Glenn Hamer said he is hopeful that the new U.S.-Mexico agreement will open Arizona up to more economic opportunities.

“Our hope is that as the details emerge we are going to have some very good new language when it comes to e-commerce and digital goods,” Hamer said. “And the types of things that simply didn’t exist a quarter of a century ago when the initial pact was negotiated.”

The announcement caps more than a year of talks on NAFTA, which Trump promised during his campaign to renegotiate – and “calms concerns” that Trump would dissolve the deal entirely, Hamer said.

David Salmonsen, senior director for congressional relations at the American Farm Bureau, said the agreement continues the already-strong agricultural trade relationship between the U.S. and Mexico.

“The most important part, as we said from the beginning of this process over a year ago now, was to really do no harm to the relationship and make sure we had tariff-free trade in agriculture between the two countries,” Salmonsen said. “It looks like that’s what we have going forward.”

Even though Canada has not been included in the current agreement, the White House has confirmed plans to start negotiating with the country as soon as this week.

A spokesman for Canadian Foreign Affairs Minister Chrystia Freeland said in an email that Canada is “encouraged” by the optimism shared between the U.S. and Mexico, but added that “Canada’s signature is required” for a trilateral agreement.

“Progress between Mexico and the United States is a necessary requirement for any renewed NAFTA agreement,” the Canadian statement said. “We will only sign a new NAFTA that is good for Canada and good for the middle class.”

During a news conference later Monday at the Mexican Embassy in Washington, officials said they hope Canada joins the deal. They hope to come to an agreement with all three parties before the end of the week so the Trump administration can submit a letter notifying Congress of the deal.

Mexican Foreign Relations Secretary Luis Videgaray Caso said he believes the elements are in place for Canada to join in.

“On the things that are purely bilateral, we have full agreements and on trilateral issues, we have what we think are good proposals for Canada,” he said. “We will put all our effort, 24/7, to promote that Canada continues to be a part of this agreement.”

Salmonsen said there is a lot more to be done before the official agreement is signed. He said he does not expect Congress to take up any deal until next year.

Mexico and Canada are important trading partners for Arizona, buying $9.73 billion in Arizona goods in 2017, according to Census Bureau data, or 46.5 percent of the total exports from the state that year.

As for Arizona’s farmers, Salmonsen said the most important aspect of the agreement is the continuation of tariff-free trade.

“I think for Arizona, and all the states now, is that Mexico should not have any new incentives to buy elsewhere,” Salmonsen said. “Hopefully we will keep those markets that we’ve spent so long building up.”