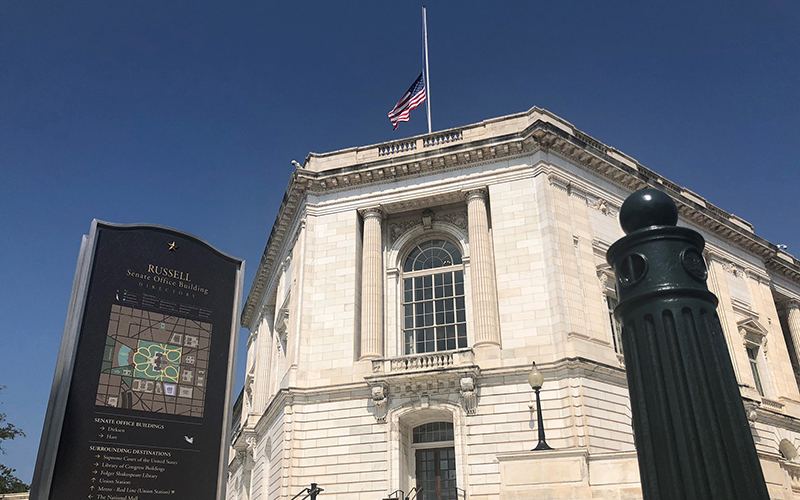 A flag flies at half-staff over the Russell Senate Office Building to mark the death Saturday of Sen. John McCain, R-Arizona. Senate Minority Leader Chuck Schumer said he will push to have the building renamed in McCain’s honor, another indicator of McCain’s stature in Washington. (Photo by Ian Solomon/Cronkite News)

WASHINGTON – Arizona Gov. Doug Ducey has steadfastly refused to discuss a replacement for Sen. John McCain until after the senator’s funeral, but political consultants say the governor faces an unenviable task when he does name an appointee.

McCain, who died Saturday after a yearlong battle with brain cancer, was described by political experts this weekend as “Arizona’s greatest face” and a “remarkably iconic figure.” Several names have been talked about in political circles, and analysts say each would have big shoes to fill.

“John McCain changes the rules on an appointment because of who he was,” political consultant Jason Rose said. “The governor … needs to appoint someone with the seriousness and stature to respect the legacy of Senator McCain.” 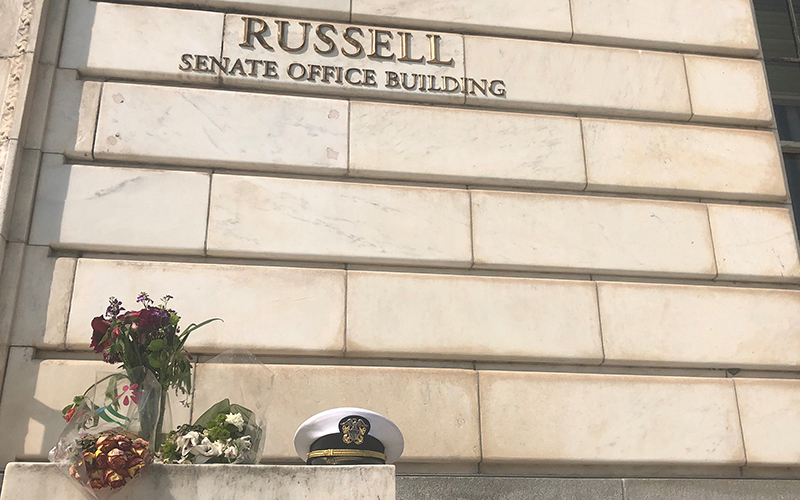 And it’s not just McCain, another expert said, but a line of lawmakers who have played outsize roles in the Senate.

Under Arizona law, if a vacancy occurs in one of the state’s two Senate seats, the governor is required to name a replacement of the same party as the departed senator.

With Arizona’s primary this Tuesday, that means whoever is appointed to take McCain’s seat will hold it until 2020, when there will be an election to fill out the remaining two years in the current term. Other than the new senator must be a Republican, it’s anybody’s guess. And Ducey isn’t talking.

The governor’s office said Sunday evening there will be no announcement of a replacement until after McCain’s burial at his alma mater, the Naval Academy in Annapolis, Maryland.

“Out of respect for the life and legacy of Senator John McCain and his family, Governor Ducey will not be making any announcements about an appointment until after the Senator is laid to rest,” said Daniel Ruiz II, a senior adviser to Ducey. “Now is a time for remembering and honoring a consequential life well-lived.”

Ducey also declined to discuss potential replacements while McCain was still alive. When news reports in May suggested that a meeting between Ducey and McCain and his family may have involved talks on a replacement, the governor’s spokesman called such reports “disgraceful” and said Ducey would not “comment on any aspect” of such stories.

When Ducey does choose, it would be the first time in Arizona’s history that a Senate seat has been filled by the governor, according to a list on the Senate’s web page.

Despite Ducey’s refusal to discuss names, many have been mentioned by politics watchers.

Sean Noble, a partner in the lobbying firm Compass Strategies, said any politician who comes next will be standing on the shoulders of great Arizona men and women who preceded McCain.

“When you look at the string of Arizona senators and members of Congress that we’ve had, going from Carl Hayden to Barry Goldwater to Dennis DeConcini to McCain,” Noble said, “I mean, it’s a pretty remarkable record.”