An engineer lowered flags at the state Capitol, a woman sobbed as the motorcade passed her along Interstate 17 and leaders of the Vietnamese community remembered him as a fighter for freedom.

Here are their stories:

Arizona Department of Public Safety troopers escorted a motorcade carrying the body of McCain from his home in Cornville along Interstate 17 into Phoenix, the sun slowly setting as the motorcade arrived in the darkness, shortly after 9 p.m.

Phoenix resident Suzanne Lambries cried as she and dozens of others watched the motorcade pass by on I-17, below the overpass in northwest Phoenix.

“He was a great man, he was a good senator and I wish him well,” she said. “To see everyone coming together, whether you’re a Republican, Democrat or otherwise, it’s just good to see everybody coming out and being the America that we’re used to, and should be.”

About 100 mourners, many brandishing U.S. flags, gathered in front of the A.L. Moore-Grimshaw Mortuaries Bethany Chapel in Phoenix to honor the senator as the motorcade arrived. 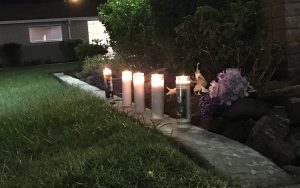 “I have to pay respects,” said Richard Smith, who said he was a combat veteran. “I didn’t agree with everything that John McCain stood for, as far as issues go, but I loved the man. He was cool.”

Smith remembered meeting McCain during the 2008 election campaign, saying the senator was a down-to-earth candidate.

“He was vicious on the floor, but if you met the guy, you wouldn’t think he had a vicious bone in his body,” he said. “He had jokes.”

McCain was expected to lie in state in Arizona and Washington, D.C., and he also will have a church service in each city, according to azcentral.com. Information about his services will be posted on johnmccain.com. 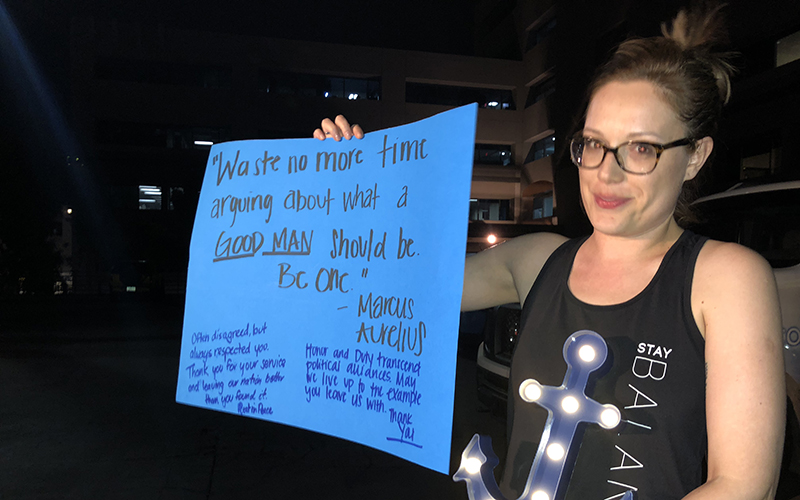 Visitors began placing tributes at the entrance to McCain's Phoenix office soon after the news of his death broke. (Photo by Bryce Newberry/Cronkite News)

People stopped by McCain’s Phoenix office on Saturday night to pay respects, bringing flowers, candles, balloons and a symbol of McCain’s service to the country – an anchor.

“He was a man of great decorum, a great man of conviction but one that crossed the aisle, and that’s something that we don’t see in politics today and something we need to remember and cherish and have live on,” Lucia De Vernai said as she delivered her tributes.

The visitors began placing the items at the entrance to the office, near 24th Street and Camelback Road, soon after the news of his death broke.

De Vernai brought balloons, an anchor and a poster that read: “Waste no more time arguing about what a good man should be. Be one. – Marcus Aurelias.”

She said despite the sad news, she’s grateful McCain will serve as an example of a man who “walked what he talked.”

“Let’s remember who John McCain was and let’s not mourn him,” De Vernai said. “His legacy is going to live on.” 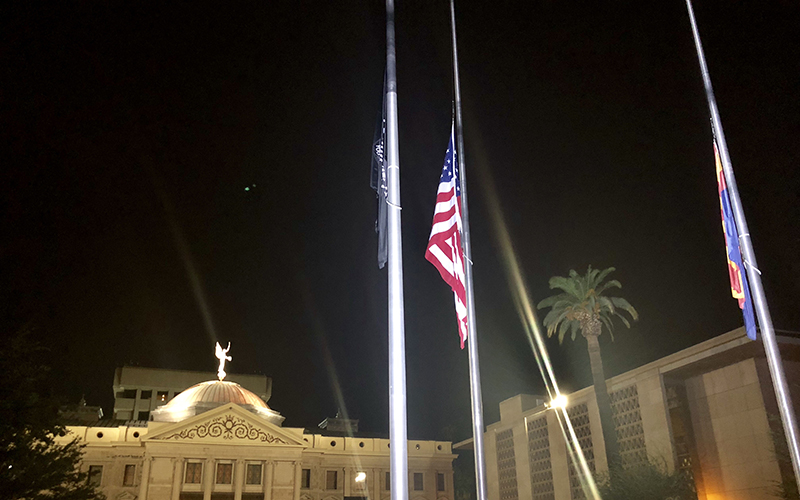 When Gov. Doug Ducey ordered the lowering of flags to half staff to honor McCain on Saturday, Ray Harmon was ready.

Harmon, an engineer with the Department of Administration, hopped into his truck and began the task, starting with the state Capitol building and moving on to Wesley Bolin Memorial Plaza.

He said it might take up to two hours to lower the 35 or so flags in the downtown Phoenix area.

Harmon, who has worked for the state for 30 years, said he doesn’t relish the task.

“Anytime we have to put the flags at half staff, it means somebody has died,” he said, adding that his political viewpoints aligned with McCain’s.

“We lost a good senator and a good man,” he said. 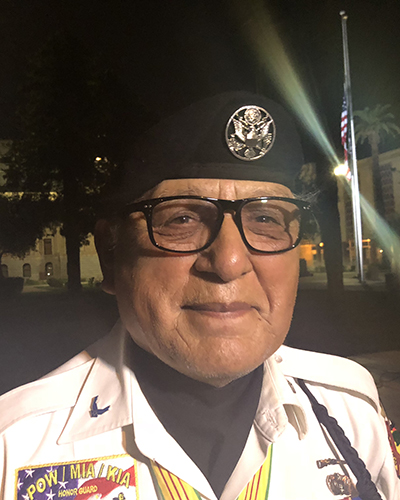 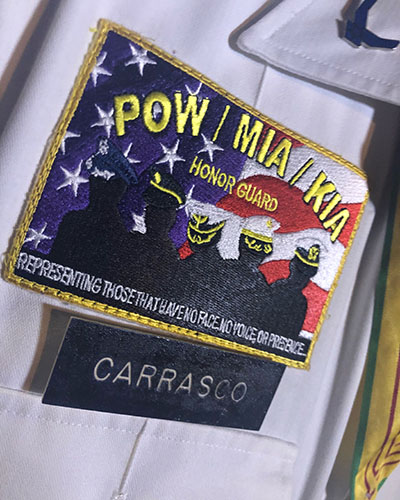 David Carrasco, who served two tours in the Vietnam War, wore his uniform steps away from the American and Arizona flags at the state Capitol, a lone sentry in the darkness.

Carrasco, a former Air Force commander, said he didn’t always agree with the senator. But he still had reason to show up there, right after he heard McCain had died at 4:28 p.m. Saturday, and he was still there at 8:30 p.m.

“I had quite a few issues with Senator McCain. Most of them were just on a political basis. But that still didn’t mean anything. He and I are both Vietnam War veterans,” Carrasco said, holding a POW/MIA flag marked with the words, “You are not forgotten.”

Leaders of the Vietnamese Community of Arizona worked closely with McCain on local and international issues over the years.

Kevin Dang, president of the Vietnamese Community of Arizona, said they looked up to McCain with the highest regards.

“His passing is a true sadness not only for everyone in the U.S., but for 80 million Vietnamese throughout the whole world,” Dang said Saturday.

Dang and other Vietnamese leaders worked on McCain’s 2016 campaign and held fundraisers with other Asian communities.

Mai Le credits McCain for her immigration to the United States through a program he sponsored. She said he is her role model.

“The legacy that we will always look up to him as a fighter, fight for the right and for the freedom,” Le said.

Sports leaders mark the loss of a fan

Representatives of Arizona’s professional sports teams – the Diamondbacks, Cardinals, Coyotes and Suns – shared their regard for McCain.

“John McCain has always been a member of the D-backs’ family and was one of this team’s biggest fans since day one,” Arizona Diamondbacks President and chief executive Derrick Hall on Twitter. “He was in attendance at the expansion Draft, the World Series and countless other games, remaining a fan through thick and thin. I am honored to consider him a friend and we will miss seeing his smiling face in the stands and our heartfelt thoughts go out to his entire family.”

And Arizona Cardinal’s President Michael Bidwell said the world “will never be the same” but “we know that the character, courage and conviction that he demonstrated throughout his life will endure forever.”

And the Phoenix Suns, in a statement, celebrated McCain as “an Arizona icon, and American hero and a friend. As we collectively mourn his passing, we also celebrate his unparalleled leadership and dedication to public service.”

The Arizona Coyotes called McCain a hero, patriot, and “a maverick who fought for what he believed in and represented the very best ideals of the United States Senate. He was a courageous leader who served Arizona and the United States with tremendous pride, dignity and distinction.”

Rest in peace to an American hero, statesman, servant of the people, and dear friend. Godspeed Senator McCain. My prayers for Cindy and the beautiful McCain family. pic.twitter.com/Tj87Hb8MtY

The political pros remember a pro

McCain spent 36 years in elected office, serving two terms in the House and in six in the Senate and running twice for president, winning the GOP nomination in 2008 only to lose to Barack Obama. It was an enviable political record that political consultants in Arizona chalked up to McCain’s ability to campaign and to the convictions that earned him his well-worn “maverick” label.

For many, like political consultant Sean Noble, McCain has been in office most of their lives. Noble was 16 when he first saw McCain, making his first bid for Senate in 1986, and said he was awed by McCain’s way with voters.

“He knew exactly the right kind of way to endear himself to people, because he really was a man of the people,” said Noble, now a partner at Compass Strategies. “For as much of an icon as he was, he was the best grassroots retail politician I have ever met.”

Another Arizona political consultant, Brian Murray, puts it simply: “He was a legend,” Murray said of McCain.

“Here at home, all the work he did with Native American tribes were following the footsteps of (former Arizona senator and conservative icon) Barry Goldwater,” he said. “He leaves his mark, not only on Arizona, but on the rest of the world.”

“I don’t know that anyone could say it better than Mitt Romney, who referred to him as ‘the greatest American in the last century,'” Rose said Saturday. “He was America’s soldier, he was Arizona’s greatest face, and the extraordinary task that Gov. Ducey has before him to replace the man with some of the biggest shoes in the history of Arizona is unenviable.”

Noble also referenced the state’s political history when talking about McCain, who was “just a remarkably iconic figure, in that mold of Arizona – the rugged individualism. Something that all Arizonans could aspire to.”

“It’s been pretty remarkable when you look at the string of Arizona senators and members of Congress that we’ve had, going from Carl Hayden, to Barry Goldwater, to Dennis Deconcini, John McCain, Sen. Jon Kyl, congressman John Shadegg,” Noble said.

“Arizona, for being a small state, has had tremendous influence at the national stage. I don’t know whether Arizona will have that kind of influence in the future.” he said. “I hope it does, but any Arizona politician today stands on the shoulders of some great men and women – Sandra Day O’Connor being the first woman Supreme Court justice.”

Although it was the middle of the night there when the news broke, Gorbachev characterized Russians’ views of McCain in this way:

McCain was a hero to democrats in Russia.

McCain consistently criticized Russian President Vladimir Putin for human rights violations, and they respected McCain for not only fighting for democracy in Russia, but all over the world.

While Russian liberals admired McCain, Russian state TV and officials criticized him heavily. They called him a liar and claimed he was never tortured in a Vietnamese prison. He also has been called anti-Russian politician, and TV claimed that he hated Russia because his plane in Vietnam was shut down by Soviet missile.