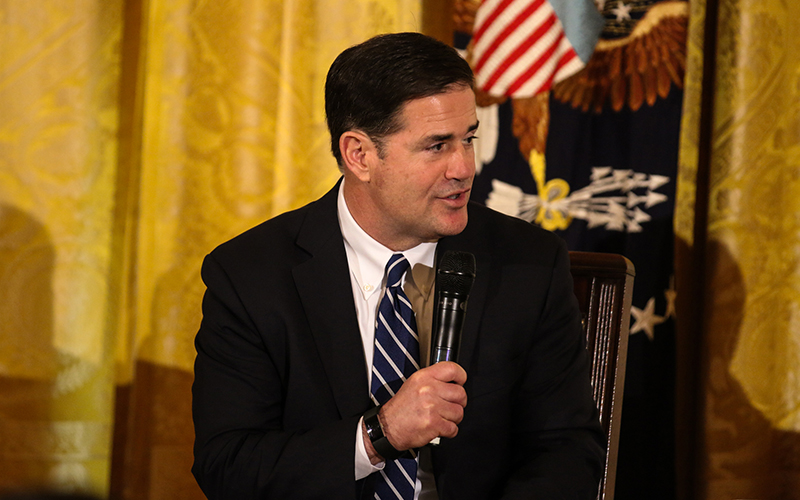 Arizona Gov. Doug Ducey, one of a handful of state and local officials at a White House event defending Immigration and Customs Enforcement agents, said it “is not a partisan issue, but a public safety issue. An issue of border security.” (Photo by Alexis Egeland/Cronkite News)

President Donald Trump said those calling for the dissolution of ICE were part of a “nationwide campaign of smears, insults and attacks by politicians shamelessly catering to the extreme elements in our society that desire lawlessness and anarchy.” (Photo by Alexis Egeland/Cronkite News) 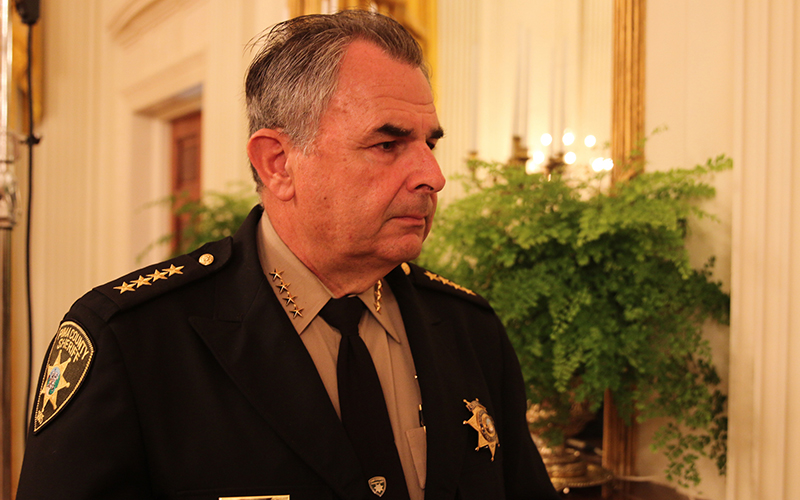 Pima County Sheriff Mark Napier said cooperation between local and federal law enforcement agencies, such as ICE and Border Patrol, is critical to stopping transnational crime in his county, which shares a 125-mile border with Mexico. (Photo by Alexis Egeland/Cronkite News)

WASHINGTON – Gov. Doug Ducey told a White House audience Monday that border officers put their lives on the line to defend residents of Arizona, which he called an “epicenter” of human trafficking and drug cartel activity.

Ducey was one of a handful of state and local officials invited by President Donald Trump to the White House event to honor immigration and border officials in the face of calls by some to abolish Immigration and Customs Enforcement.

“As a border governor and a border state, these are things we deal with every day,” Ducey said. “This is something that should concern every local law enforcement person and every citizen across the country.”

Ducey and Cochise County Sheriff Mark Dannels were part of a panel in the East Room of the White House that was packed with scores of uniformed immigration and border agents, as well as local law enforcement officials, including Pima County Sheriff Mark Napier.

“The cooperation with federal partnerships to deal with transnational crime is really paramount to us because it really has an adverse impact on public safety in my county,” which has a 125-mile border with Mexico, Napier said after the event.

The White House event comes as some Democrats have called for the abolition of ICE in the wake of outrage over the Trump administration’s policy of separating immigrant families at the border.

A House bill introduced last month said the agency has strayed far from its original mission of combating terrorism in the aftermath of the 9/11 attacks, and calls for a study of how its responsibilities can be divided among other agencies.

But Trump, in his invitation to Monday’s event, said the opponents of ICE were part of a “nationwide campaign of smears, insults and attacks by politicians shamelessly catering to the extreme elements in our society that desire lawlessness and anarchy.”

Trump said he hosted the event to give recognition and support to an agency that goes underappreciated.

David Garcia, a Democratic candidate for Arizona governor, blasted Trump in a prepared statement for his “extreme partisan grandstanding.” He went on to accuse the current governor of “divisive and distracting border posturing trying to deflect from Ducey’s and Trump’s failures to solve real problems.”

Ducey was not available for comment after the event, but said from the stage that this “is not a partisan issue, but a public safety issue. An issue of border security.”

Ducey said he believes border patrol should be a concern for everyone, not just those from one party or another, and not just those who live on the border.

He said the Arizona Department of Public Safety and sheriff’s departments across the state have already partnered to create a border strike force, and that the Trump administration’s support of border control gives Arizona a friend at the federal level as well.

Dannels and Napier both agreed that partnership is key when it comes to securing the border.

“It’s a collaborative trust with our governor, local law enforcement, fellow sheriffs, troopers in Arizona and federal partners all throughout,” Dannels said. “That’s a partnership that works.”

Napier said the federal-local partnership is essential for information sharing, resource sharing and fiscal support for the sheriff’s departments. Dannels said the state’s border task force includes 10 National Guardsmen working with the county sheriffs. Without this collaboration, he said, the border would be at risk.

But Ducey said it is also important to recognize that when agents are “interdicting the dangerous drugs, the illegal ammunition that is coming across our border, they’re getting credit for that.”