Galina Mihaleva holds up a brittle prototype as she explains the process of growing textiles with kombucha. (Photo by Lillian Donahue/Cronkite News) 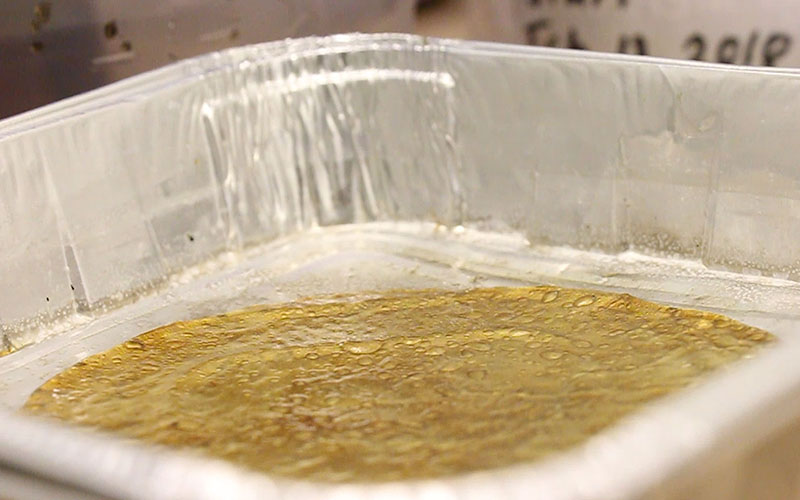 After fermenting, a light green tea kombucha layer dries out in the lab before testing. (Photo by Lillian Donahue/ Cronkite News) 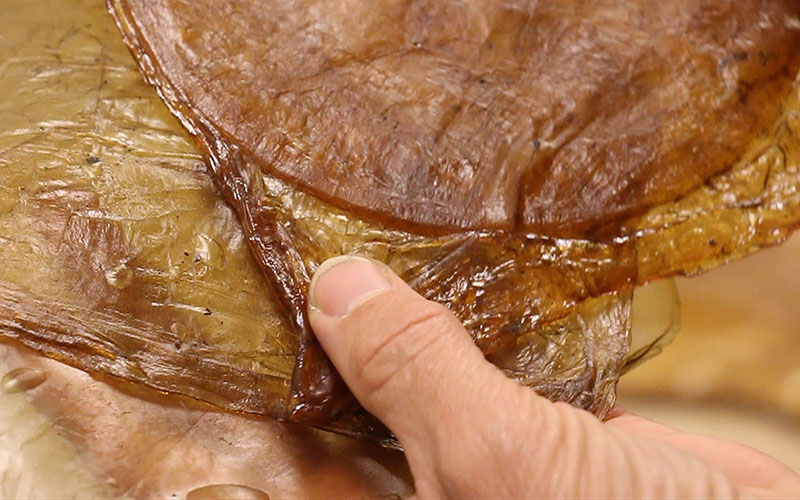 TEMPE – You smell it before you see it.

As Galina Mihaleva opens the door to a former teachers’ lounge at the School of Art at Arizona State University, the pungent, sweet-and-sour aroma of fermenting tea assaults the senses.

Inside the lounge is a makeshift lab where dozens of plastic containers, some open and others closed, hold a blend of teas, sugar, water and bacteria that are fermenting into a slippery, rubbery fiber mat. A mat that, once dried, will become someone’s coat, jacket or dress.

The brightly lit, sterile-looking nook may look high-tech but it actually is a new twist on a millennia-old process that Mihaleva hopes will be the future of sustainable fashion.

“This is an old thing,” said Mihaleva, a visiting professor at ASU who teaches students about the future of sustainability in the industry. “Two thousand to 3,000 years ago, the Chinese were doing (this) without knowing they were making biotextiles.”

“This” is kombucha, a fermented tea drink that can be used to make a leather-like textile that supporters see as a potential solution to the environmental impact of the fashion industry, often considered the second-most polluting industry.

That problem has been aggravated in recent years by the “fast fashion” fad, where people buy an item of clothing and throw it away a few months later when it’s no longer in vogue. Those cast-offs may end up in second-hand shops, but more often they end up in a landfill.

“We’re all consumers of disposable fashion,” said Angela Johnson, a local designer and co-owner of the Fashion and Business Resource Innovation Center – or FABRIC – an incubator in Tempe.

“We’re trained to think, ‘Oh this is a $20 shirt; well, it will be gone in three months, anyway.’ But then where does that go?” she asked.

Common clothing materials are not biodegradable, so a thrown-away shirt can sit in a landfill while the chemicals used to make and dye the fabric leach into the soil and water supply.

Which is where Mihaleva’s work comes in.

Inside her lab in Tempe, plastic containers are stacked on a folding table covered with brown packaging paper. They’re filled with growing bacteria and labeled with names and dates. Next to the bins are several foil casserole dishes where the leathery kombucha textiles lie drying in various levels of transparency and shades of brown.

Mihaleva said others have explored fermenting and creating kombucha leather but have not been able to overcome the major disadvantage of the material – it disintegrates in water. She’s determined to find ways to make kombucha water-repellent, experimenting with everything from oil overlays to changes in the drying process.

“My house is full of kombucha. I have an outside kombucha farm,” said Mihaleva, who studied costume design at ASU.

She has also done research on kombucha and other innovative textiles with the sustainable textile lab at Nanyang Technological University in Singapore, but Mihaleva’s work extends beyond academia. She has shown her wearable, sustainable designs at international competitions.

Jordan Rose already is a believer. Rose, a friend of Mihaleva and the owner and founder of Rose Law Group in Scottsdale, is waiting for her kombucha jacket to be grown.

“I am so excited. I can hardly wait to see it,” Rose said. “I trust Galina … so I actually don’t want to see it until she feels it is done.”

Mihaleva and Rose have talked about patenting the process of producing durable kombucha clothing if Mihaleva can overcome the challenge of making the material water-resistant. Until then, she will continue hours in her lab blurring the lines between biology, technology and fashion.

“It’s amazing the properties of the kombucha,” said Mihaleva, who believes the material eventually will grow on the fashion industry, inspiring a new wave of sustainable clothing.

For Johnson, of FABRIC, work still needs to be done with kombucha before it goes from a lab to mainstream production. But she, too, is hopeful.

“I think we’re a long way off. This is like the farm-to-table movement. All of this is, it’s happening, people care, they are willing to spend more money. But not everybody is, so it takes a little time for that to catch on.”