Arizona’s CDM Fort McDowell lost to Florida’s Savage Storm in the NABI’s boys Division I final, which was played in July. The NABI Foundation has provided more that $250,000 in scholarship opportunities to Native basketball players. (Photo by Nate Fain/Cronkite News) 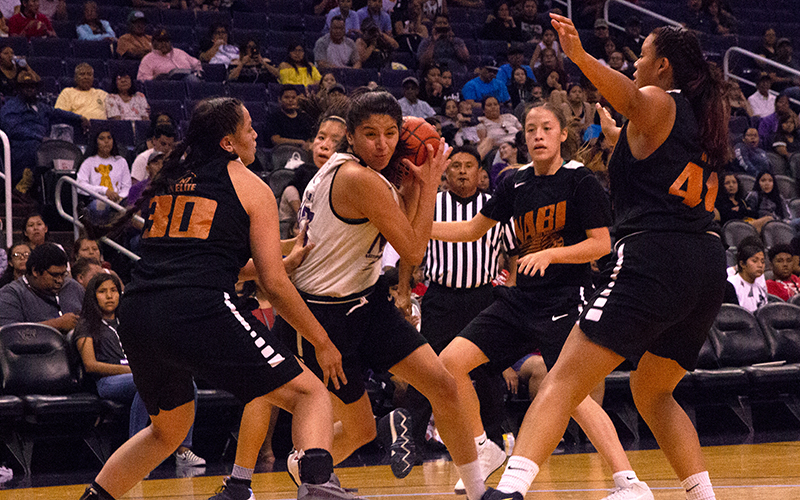 The NABI Foundation is about basketball but also furthering education. The Navajo Nation Elite smothered Yakama Nation in the girls Division I Final in the foundation’s tournament last month at Talking Stick Resort Arena. (Photo by Nate Fain/Cronkite News)

PHOENIX – As Samantha Quigley tears down another rebound, she sees more than a basketball. In her hands is something beyond an object that she can dribble around defenders and put through a hoop with ease.

It’s a ticket to a better life.

“Basketball is, like, the only key to go a long way if you’re a native,” said Quigley, the starting forward for the Navajo Nation Elite. “Basketball taught me a lot and it can help me get off the reservation.”

Founded in 2003, the NABI Foundation invites teams from all over the country to compete in the five-day event. The program provides players with more than a few games of basketball. Throughout the week, seminars are scheduled to offer lessons in the importance of healthy living and higher education.

Mark West’s playing days were over. It was 2002, and the former Phoenix Sun and NBA journeyman was focusing on life after hoops.

One day, a friend, Scott Podleski, told West he needed to take a trip to witness one of basketball’s best-kept secrets. West entered a gym where a state championship was being played and was amazed by what he saw: an electrifying, speed-of-light rendition of the game known as “rez ball.”

“I had no idea Native American basketball was so big in Arizona,” said West, who’s originally from Virginia. “It was amazing. We have all these very good basketball players who weren’t represented in Division I, II or III.”

West, 57, still had a strong relationship with the Suns, for whom he played eight of his 17 seasons, and he serves as vice president of player relations for the team. He and Podleski leveraged that relationship to launch the NABI Foundation, which the Phoenix Suns and Phoenix Mercury sponsor. The tournament finals are played at Talking Stick Resort Arena, home court for both teams.

On July 14, the Navajo Nation Elite won the girls Division I championship. Quigley, 17, was named Most Valuable Player.

The Savage Storm, from Florida, beat the team CMD from Fort McDowell in the final of the Division I boys championship.

But West and the other founders always envisioned that NABI would be about more than basketball.

Since the tournament’s conception, NABI has provided more that $250,000 in scholarship opportunities to Native basketball players.

Education data are difficult to collect on sovereign tribal lands, but a 2017 study by the Postsecondary National Policy Institute, a nonprofit funded by Bill and Melinda Gates, found that just 10 percent of Native Americans attain a bachelor’s degree, significantly below the national average. In addition, more than a quarter of Native Americans live in poverty, according to the U.S. Census.

“When we first went to tribes and asked them what they thought about a national basketball tournament,” West recalled, “some of them said, ‘Yeah, and maybe we could finally get a player in the NBA.’ That may be the ultimate goal, but the main dream is we want them to get an education.”

During the week of the tournament, participants attend a college and career fair and education summits, one of which is led by A.C. Green, who won three NBA titles with the Los Angeles Lakers.

Brad Greene helped put on Junior NABI, which is a part of the program that focuses on preparing middle-schoolers for high school. Greene, 20, plays basketball at the University of California, Irvine. He credits NABI for helping him experience life beyond the reservation.

The 6-foot-10 Greene, from the mountains of Lone Pine, California, grew up loving baseball. He came to realize that the sport was his best chance of getting out of the tiny town of 2,000.

“When I started basketball, it was a big change,” Greene said. “I had to learn things quickly to catch up. Playing in tournaments like NABI helped me with that and helped me earn an opportunity to play college ball.” 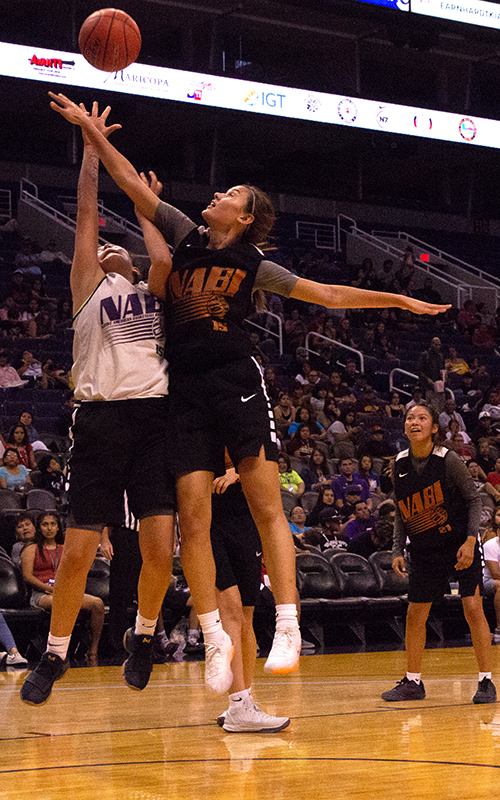 Founded in 2003, the NABI Foundation invites teams from all over the country to compete in the annual five-day tournament. (Photo by Nate Fain/Cronkite News)

Basketball opened up a world that a kid from the Paiute-Shoshone Reservation never felt possible.

“Sports are the reason I’m in college,” Greene said. “I wouldn’t have been able to pay for a four-year university without my basketball scholarship. Being able to express myself through sports has helped me a lot.”

UC Irvine, with more than 25,000 students, is regarded by U.S. News and World Report and The New York Times as a top public university in the United States.

Last year, Greene took a trip with his team to South Korea.

And although he’s helping kids polish their skills for the next level, his experiences have taught him that there’s more to life than making the high school team.

“For a lot of Native youth, not a lot end up going to college. Graduating high school is a challenge,” Greene said. “We just want to make sure we have the education to progress as a people and just develop ourselves and help those around them.”

Like Greene, players come from all over the country to go up against the best competition. But it’s also the education, scholarships and friendships that help attract such a big field.

“This in my 10th year. I like the program,” he said. “It gives a good experience for the boys to come down here for Alaska. … We have a boy on our team who’s in the continental United States for the first time.”

Craft, who paced the sideline at Ak-Chin Indian Community Recreation Center in a pair of flip flops that he finally had a chance to wear, coached the Alaskan boys to an NABI championship in 2013. Back home, a gym is really the only place his players can compete, and because they’re all spread out across the vast state, they have to travel great distances just to practice. Finding a team to scrimmage is even more difficult. NABI gives the boys the competition they crave.

“We only get to play in a few tournaments a year,” Craft said. “Our team played in Hawaii, in a really competitive island tournament, but NABI is the only other tournament that’s close to it.”

Alaska’s first matchup at NABI 2018 was against the AZ Warriors, one of the best teams in metro Phoenix. Both teams are regulars in the tournament and, over the years, despite being separated by more than 3,000 miles, have forged a bond.

“There’s a lot of good blood between teams out here,” Robertson said. “That’s what I appreciate most about NABI. It brings all these teams together. This is the only time we get to see a team from Alaska and other states, so it’s good to build a good relationship with them.”

After NABI, the two teams are going to a basketball camp in California.

AZ Warriors, an interurban team coached by Robert Johnston, have won NABI twice. Many of his past players have also turned out to be accomplished students. Last year, six former AZ Warriors played basketball at four-year universities.

“I think it says a lot about our program that we can help these kids figure what they want to do and help them decide what school to go to,” Johnston said.

Quigley, this year’s girls Division I MVP, also wants to parlay her basketball skills into an education. She still has one more year of high school and one more year of NABI, but her goal is to play California State University, Long Beach.

And find that ticket to a better life.