Both sides claimed victory Friday when the Arizona chapter of American Civil Liberties Union withdrew a lawsuit it had filed against Rep. Paul Gosar, R-Prescott, after he blocked two constituents from his social media accounts. (Photo by ijclark/Creative Commons)

WASHINGTON – The Arizona chapter of American Civil Liberties Union on Friday withdrew a lawsuit it had filed against Rep. Paul Gosar, R-Prescott, after he blocked two constituents from his social media accounts.

Both sides claimed victory in the fight, with Gosar’s general counsel calling it a fitting conclusion to a court case that lacked merit, while the ACLU celebrated the end of what it called a practice of “censoring comments that express opposing or critical viewpoints.”

The feud began last fall when J’aime Morgaine, a constituent of Gosar’s, said she was blocked from his official Facebook page after making posts that were critical of him. The Kingman resident said that when Gosar’s office stopped responding to her attempts to address the issue, she sued charging that his actions violated her First Amendment right to free speech.

But that didn’t stop Morgaine or the ACLU from filing a suit in U.S. District Court in Arizona in April on behalf of her and another blocked constituent, charging that Gosar infringed on their “right to express opposing viewpoints in online public forums.” 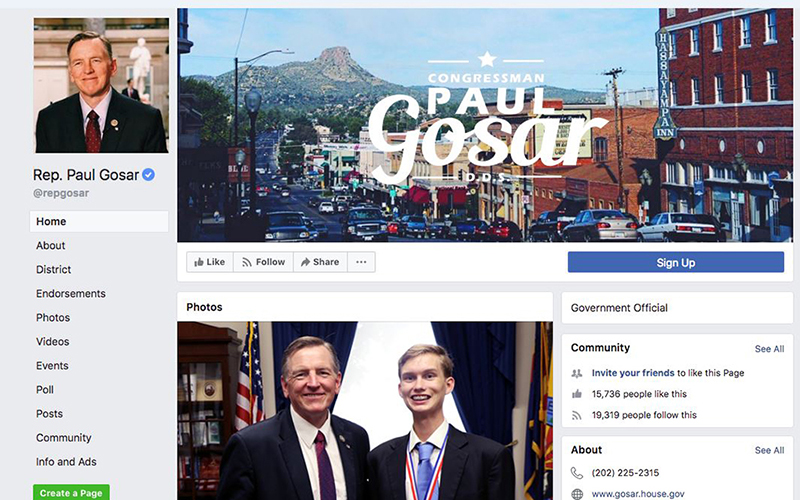 Rep. Paul Gosar, R-Prescott, blocked, then restored a constituent’s access to his official Facebook page, sparking a lawsuit and a debate over free-speech rights.

ACLU staff attorney Darrell Hill, who represented Morgaine and fellow plaintiff Paul Hamilton, said earlier this summer that the suit was filed because “the First Amendment prohibits public officials from suppressing speech on the basis of the speaker’s viewpoint.”

But Tom Van Flein, Gosar’s chief of staff and general counsel, said the case was pursued “for political reasons and not legal reasons.”

“This was never about free speech,” Van Flein said. “This was about using our platform to vent hatred and intolerance.”

“The only reason the lawsuit was dropped was because Mr. Gosar made concrete changes to his social media policy when he agreed to not block people in the future,” Hill said. “Without those changes, we would still be pursuing this lawsuit.”

A federal judge in New York ruled in May in an unrelated case against President Donald Trump that the president’s social media account is a public forum and people had a right to post to it, but legal experts split on whether that ruling would apply to a congressman’s account.

Morgaine, now a candidate for the Arizona House of Representatives, said Friday that she had intended to see that suit through to its completion, but was able to achieve most of what she wanted and did not want to “waste ACLU resources by continuing with the lawsuit.”

“I wanted to be unblocked, that was the first,” she said. “The second piece was that I wanted him to modify his social media policy to be consistent with the Constitution. And the third piece was a wanted a declaratory judgment that what he was doing was unconstitutional.”